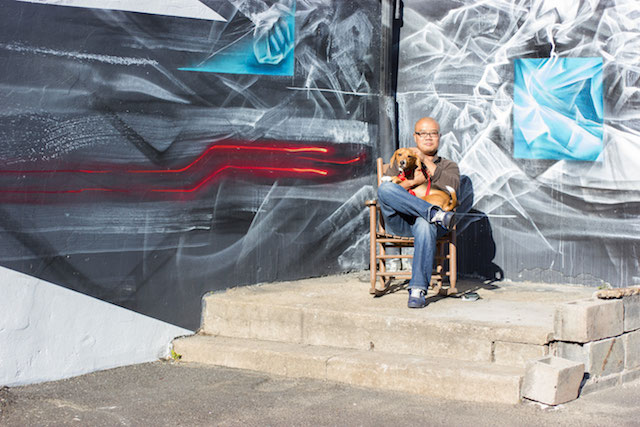 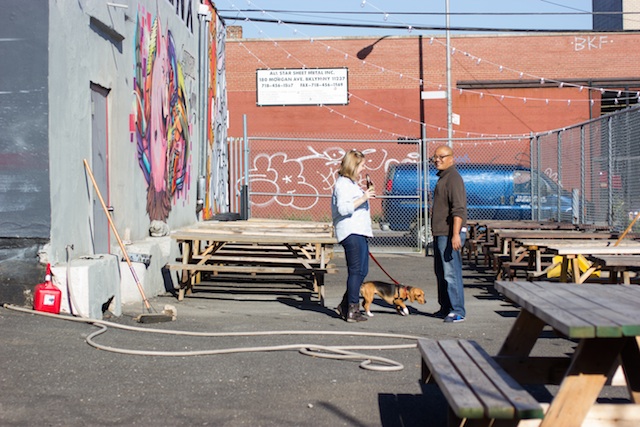 Earlier this week Tyson Ho broke New York’s Texas-style brisket spell, opening Arrogant Swine, the city’s first Carolina-style barbecue joint. While his colleagues in the barbecue world, like Dan Delaney of BrisketTown and John Avila of Morgan’s have nurtured beefy obsessions with brisket, Tyson will be serving Carolina whole hog (not pulled pork), focusing on “outside brown” pork shoulder–the caramelized outer layer of the pig produced by the slow burn of smoke. Daniel Vaughn, Texas Monthly’s barbecue evangelist, has called this layer of crackly skin and juicy meat “the fatty brisket of North Carolina.” It’s been Ho’s mission, he told me back in February, to become “a church of pork,” so you’ll find ham, too, alongside traditional sides like pone, a kind of cornbread.

From finding a location to diving into the largely untested territory of onsite, outdoor smokers in Brooklyn, Ho has been discovering the highs and lows of being a restauranteur. Romantic as it may sound, the experience of opening a restaurant without major backing in Brooklyn today is anything but.

“I think whoever said it’s all about the journey and not the destination probably didn’t open a restaurant in New York,” Ho said to me one afternoon.

Just as he is treading new ground for New York barbecue, Ho is also opening in an unlikely location. The north end of the East Williamsburg Industrial Park is a sparse, noisy neighborhood with little pedestrian traffic and even less of a reputation for restaurants. Aside from Fitzcarraldo, which serves Liguarian food, Ho counts a lumber company, car shop, and a Lays distribution center among his neighbors. But that’s where the Flushing-born, Carolina-trained pit master built his restaurant, and, for the past six months, where he has been learning the restaurant ropes.

When he first checked out the space, lumbering trucks and desolate sidewalks didn’t exactly inspire enthusiasm. The rent, at $7,500 a month, was right–this is what passes for good in Brooklyn these days–but he wasn’t interested in building a restaurant out of the skeleton of a warehouse.

What sold Ho was the space’s restaurant certification, something another property a few blocks north, renting at $5,000 a month, didn’t have. It was a crucial difference. A storefront must have a restaurant certification for the lessee to legally operate a food establishment out of it. Changing that certification–which brings air quality, neighborhood makeup, and other factors into play–would add months onto his opening process, as the Department of Buildings is perpetually backed up. “Without it, I would need to file a change of use, get a letter of no objection from the landlord, which isn’t so easy, and then pass my construction inspection,” Ho explained.

Logistical headaches also came quickly. One day, a door was installed in the wrong location; left there, it would violate code. Another, an investor decided that instead of buying trailers for their smokers, he’d build the structure himself claiming it would be cheaper. The structure collapsed into a pile of useless timber and Ho booted him.

Ho aimed to smoke his hogs on site. But, as his electrician discovered, this was a first for Brooklyn restaurateurs (yes, there are some exceptions out there, but it’s very uncommon). Air quality concerns impede barbecue in New York, as urban density makes complicated and expensive filtration systems necessary. Here, Ho benefited from being in an industrial zone, where air quality standards are lower and there are no residents who might not want those porky aromas wafting into their homes. However, one of the smokers he wanted to smoke with didn’t have a UL patent, meaning he couldn’t legally use it. Getting that patent would have required him to shell out thousands, but Ho couldn’t stomach spending that money, and ended up subbing in another unit, one he was less happy with, that was already UL approved.

The single biggest hurdle facing restaurants in Brooklyn, and the one most responsible for their lengthy build-outs and often long-delayed openings, is the sheer amount of regulatory bodies they must work with. When opening, Ho says, a restaurant has to answer to eight distinct bodies. “You’re always engaging with Buildings. You file your plans with them, you need to file an amendment if you decide to change or add anything. Everything you do requires multiple touching points,” Ho said. “You’re just one person that a very overtaxed and understaffed team is dealing with.” 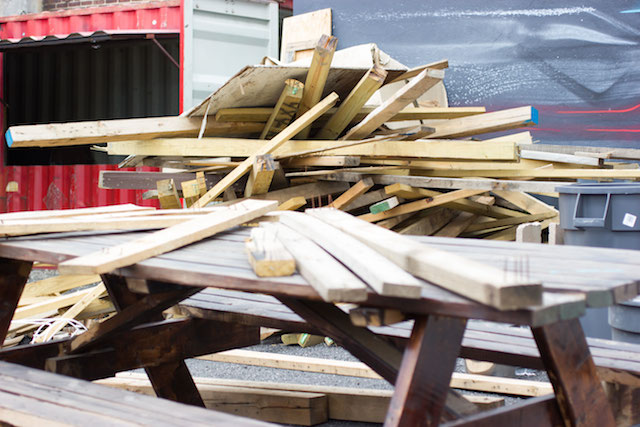 The backyard gets the build-out treatment. Photo: Chris Crowley

For Ho, all that paperwork finally went through earlier this fall, and now Arrogant Swine is up and running.

So what kind of place are you going to be feasting on outside brown hog at? Ho wanted to create a friendly, low-key spot, not exactly ramshackle but certainly not overly designed. This is in keeping with his mission, starting with last year’s Hog Days of Summer, to capture the experience of the Carolina pig pickin’ here in Brooklyn. And, all that meat calls for something to drink, which the Swine cheerfully provides, with some 20 varieties of beer (many, but not all, local) and lots of whiskey.

Instead of forcing an aesthetic, Ho let it develop organically, allowing his limited budget to shape, rather than obstruct his vision. “I didn’t plan to have two massive fans on the ceiling, but when you have two massive fans available, you don’t say no,” Ho said. (He got those from Silver Spurs, a longtime downtown dinner that shuttered in December of 2013.) Rather than spend money on wood made to look reclaimed, he bought the cheapest boards available from Home Depot and burned them in the style of Japanese shou sugi. He scoured Craigslist and enlisted the Bushwick Collective to paint murals on the building’s walls, but even with more resources Ho wouldn’t have done things all that differently.

“I’ve said this many times: the best meal you’ll ever have is in your backyard,” Ho explained. “The burger might be overcooked, but it’s comfortable, your engagement is accentuated, and nothing is taking your attention away from the people you are with. I want the Swine to be place you go to have a good time with your friends.”