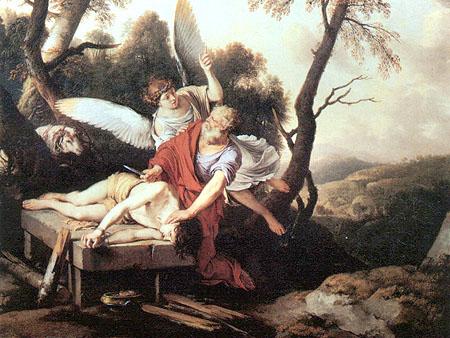 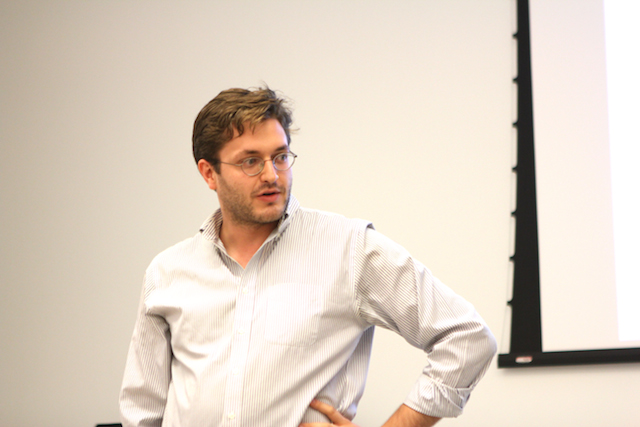 Ian Olasov started the Brooklyn Public Philosophers to, “change the perception of philosophy as something totally removed from everyday life.” Photo: Asa Merritt

It was nearly closing time at the central Brooklyn Public Library when a woman asked Ian Olasov how to spell Kierkegaard so she could find the Danish philosopher’s books in the stacks.

Olasov, 28, is no librarian. He’s the founder of Brooklyn Public Philosophers (BKPP), a group whose meeting tonight will center on Kierkegaard. Starting at 7pm, professor Jamie Aroosi of Yeshiva University will ask how love can provide stability in an increasingly transient world. How will he answer the question? By comparing Kierkegaard’s work to Spike Jonze’s Her and  the TV series, Battlestar Galactica.

A philosophy student at the CUNY Graduate Center, Olasov says he started BKPP to, “change the perception of philosophy as something totally removed from everyday life,” and if last month’s meeting was any indicator, the Ditmas Park resident is succeeding. That night a mix of writers, artists and activists gathered to listen to a young professor named Nick Riggle kick off the BKPP’s second season with a discussion of street art.

During his 40-minute lecture, Riggle surveyed artists like Invader, Mark Jenkins, and stikman, and used their work (displayed in a PowerPoint presentation) as a springboard for introducing philosophical issues: the definition of “street,” the connection between artwork and the space artwork uses, and the threat “hype” poses to the form. After the lecture, audience members spoke about the evolution of Bushwick graffiti, distinctions between art and street art, and the street artist MOMO’s Manhattan tag–in 2006, MOMO painted his name on the island of Manhattan; the full signature could only be seen aerially.

After the event, Drew Valens, an actor in his thirties, said, “I was skeptical because I thought it would inevitably be esoteric, as philosophy can’t help but being, but I actually found myself thoroughly engaged, and inspired to learn more.”

Jeremy Fisher, who studied philosophy in college, appreciated the opportunity to get back to his academic roots. “I don’t do this as a profession,” he said. “It’s cool to have a forum to talk about philosophy.”

BKPP is hardly Fisher’s only option. Meetup.com lists more than a dozen groups that focus on philosophy. Columbia and NYU open certain lectures to the public. The School of Practical Philosophy (those ads you’ve probably seen on the train) promises enlightenment in a $90 course. But BKPP stands out from the field: The speaker is always an expert, no one is drunk (many of the Meetup groups congregate in bars), admission is free, and the talks target a pop culture-savvy audience.

Olasov said that since he started BKPP last year, philosophers have started to reach out to him to speak. “For the great number of philosophers who are working on issues that affect or preoccupy a large group of people, it’s really righteous if they can articulate what makes their work relevant,” he noted in an email.

BKPP is making ripples in more intimate ways as well. At the group’s very first meeting last year, Olasov invited professor Rachel McKinney to speak about the relationship between coercion and law enforcement and at least one police officer attended. Olasov believes such moments of engagement promote a culture of democratic practice he finds lacking in the United States.

Meetings are open to all, and require no familiarity with the work of philosophers being discussed on a given evening–good news if you were worried about trying to knock out Kierkegaard’s Fear and Trembling by tonight. If you’re a Battlestar Galactica fan though, the Brooklyn Public Philosophers have issued a challenge for enthusiasts to photoshop a cylon into the painting above, illustrating the story of Abraham and Isaac, to further illustrate the philosopher’s thoughts on sacrifice.