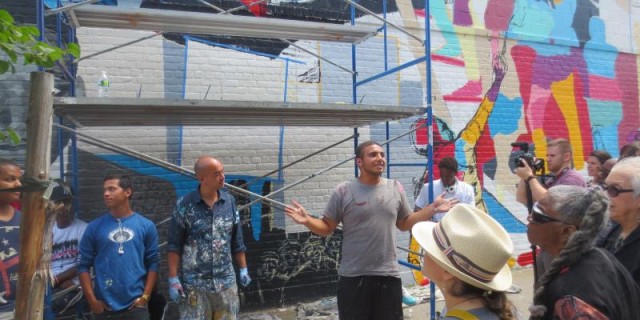 Get outside this weekend and explore Gowanus during its open studios event, filled with art walks like a tour of the area’s four Groundswell murals. Photo: Groundswell

The weather gods really put a damper on the last two Saturdays, so take full advantage of the sunny weather this weekend. You could carve out time to explore Gowanus Open Studios, which kicks off with an opening ceremony at Gowanus Ballroom on Friday, followed by open studios Saturday and Sunday, and artist- and curator-led tours. Or work in some leaf-peeping with a day trip to Storm King before it closes for the season. Until the blue skies ahead, there is a blow-out birthday bash on Thursday for Brokelyn, which is celebrating five years on the internet (that’s like 10 years in print!) and Funny Story is back at Brooklyn Brewery on Thursday too, featuring a casting director, a comedian and a sex-educator. Of course.

One of the many events we were looking forward to in our October Fun Map is tonight at Greenlight Bookstore, where the book launch of Never Can Say Goodbye, a collection of essays by writers professing their unshakeable love for this town, will leave you feeling warm and fuzzy about the city. Need some more reasons to love Brooklyn this week? We’ve got plenty.

Thursday, Oct. 16: If you’ve ever wanted to see a ten-piece string ensemble perform Velvet Underground and Charles Mingus, now’s your chance. Experimental composer and violinist Tom Swafford couldn’t decide if he wanted to be a conductor or a rock star when he was a kid, so he chose both, bringing his ever-evolving String Power ensemble to Park Slope’s Tea Lounge in 2007. They’re back this Thursday, performing classical renditions of rock and pop songs, as well as Arabic music, funk, jazz, and maybe even a little tango, not to mention some of Swafford’s original compositions. We’ll take our chai with a little cello, please.—L.R.

Friday, Oct. 17: Stations of the Elevated begins its week-long run at BAM today. Shot in 1977 and screened for the first time at the 1981 New York Film Festival, Stations offers a rare, and talking-headless glimpse into the streetscape of a city that no longer exists. Take a date and plan to discuss for at least the length of two cocktails after the 45-minute film is over.—A.G.

Saturday, Oct. 18th: There’s no better way to get in a spooky holiday mood than judging a pile of Jack-o-Lanterns. On Saturday, Williamsburg’s artsiest hardware store will host its fifth annual pumpkin carving contest in its garden. Since all entries must be pre-carved you’re not likely to pick up any tips or techniques, but you can spend all day on your pièce de résistance at home as long as you register by 7:45pm and pay the $5 entry fee (as always, it’s free to peruse the pumpkins and vote for favorites in multiple categories–it’s like a cheaper, not-sold-out version of the Blaze). Crest Hardware provides the candles, as well as some refreshments. And don’t forget to say hello to Franklin, Crest Hardware’s pig-pal in residence.—L.R.

Sunday, Oct. 19: During the McCarthy era, thousands of Americans came under suspicion as Communist sympathizers, including visual artist Arnold Mesches. The FBI compiled an 800-page dossier on him over the course of 26 years with the help of “informants” he considered friends. He acquired those files in 2001 and turned their contents into collages of news clippings, personal photographs, and ’50s ephemera, now on display at MoMA PS1 and Life on Mars Gallery in Bushwick. In conjunction with the exhibits, he will appear at Life on Mars as a panelist in a symposium regarding this work alongside well-known curators, critics and professors like Robert C. Morgan, Charlotta Kotik, and Lilly Wei, who will discuss the project’s relevance in an age of concerns over privacy, social media data mining and NSA surveillance.—L.R.

Monday, Oct. 20: Oops! Jo Firestone did it again! From the funny lady behind interactive, off-kilter comedy events like Punderdome, The NYC Inner Beauty Pageant, and monthly dating show Friends of Single People, comes a new series that’s equal parts karaoke, dance party, sketch comedy—and something wholly unpredictable. With fellow UCB alums Josh Sharp and Aaron Jackson, “A Hastily Written Masterpiece Starring the Audience” recruits volunteers from the crowd to act out a musical loosely based on the songs of well-known pop stars. Each evening has its own theme (in the past, Firestone & Co. have paid tribute to Prince and Madonna) and for their latest installment, the trio will revisit the hits of none other than Britney Spears. This time, they’re taking over Crown Heights venue Friends and Lovers, and there’s also a horror theme thrown in since we’re so close Halloween. Will the “Toxic” Avenger make an appearance? Undead schoolgirls? Impromptu head shaving? If you’re a Slave 4 laughs, buy an $8 ticket in advance.—L.R.

Tuesday, Oct. 21: If, like me, you missed the memo that Whiskey Tango Foxtrot was the book of the summer, now is your chance to catch up on this satirical, techno-thriller. In it, a shadowy corporation vies with activists to control the collection and sharing of all the data in the world–a not-so-far-fetched premise that is fleshed out by the memorable characters caught up in the battle. In his first NYC appearence to promote the book, David Shafer reads from his darkly comic debut and talks about its genesis with The Magician’s Land author Lev Grossman tonight at Community Bookstore. —N.D.

Wednesday, Oct. 22: This entire week is filled with events dealing in security breaches and leaked secrets, but that’s just art imitating life. The Source, a new musical-theater work at BAM, wants us to examine the impact of all this whistleblowing through a performance that uses Twitter feeds, declassified military video clips, and a chorus of computer-processed voices to explore the media storm surrounding Chelsea Manning, who, in her previous life as Bradley, released classified documents to WikiLeaks. The show runs through Oct. 25, and all tickets are $20. Now, when is Snowden: The Musical coming? —N.D.