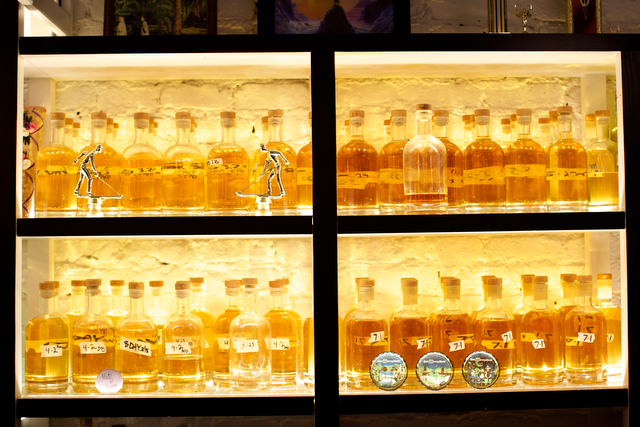 These bottles lining the back bar of the Royal Palms Shuffleboard Club contain barrel-aged Barr Hill Gin, soon to debut in a cocktail called The Bee’s Knees. Photo: Clay Williams

Before the Royal Palms Shuffleboard Club opened in Gowanus, shuffleboard was an activity you associated with Florida retirement homes. Now Royal Palms is one of the hottest spots in South Brooklyn, best known for its sprawling shuffleboard courts, but it also has one of the borough’s most sophisticated cocktail programs. Designed by general manager Tim Judge, a longtime South Brooklyn resident who previously co-owned Sweetwolf’s in Park Slope, the cocktails are all “vacation-inspired,” but they are also heavy on craft, employing homemade syrups and small-batch spirits, some of which they’re barrel-aging themselves.

“When I first tasted [Vermont-based] Barr Hill Gin, which is essentially an old Tom gin that’s finished with the farm’s raw honey, I was curious what a heavy charred barrel would offer. So we gave it a try,” Tim said. “This gin is made from mostly juniper whose flavor tastes fantastic after some time in wood. It changes the color and complexity wonderfully.”

The gin, which Tim started barreling in February, will debut soon in a cocktail called The Bee’s Knees. He’s also using the same barrels to age mezcal, adding Luxardo marischino liqueur and Chartreuse for a drink called The Last Word. Using the same barrels for the gin and the mezcal means that you’ll be able to taste the background notes of juniper in the aged mezcal cocktail; the aging also downplays the sometimes-overwhelming smokiness of the mezcal.

Judge recently invited Brooklyn Based to a tasting and made our heads spin with selections from the Royal Palms’ curated cocktail list. We asked him to spill a few of his craft secrets.