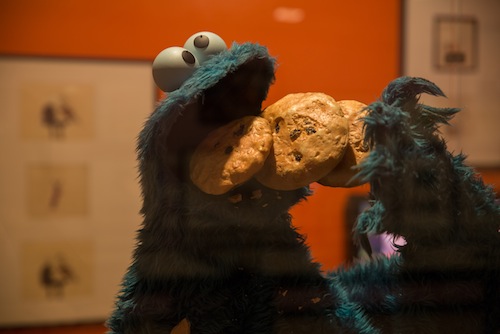 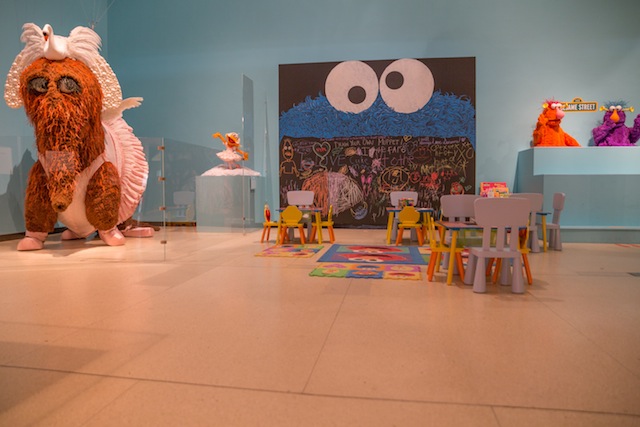 “Somebody Come and Play” features 250 items from the sets of Sesame Street, including 20 Muppets like the elusive Snuffleupagus. Photo: Jonathan Blanc/The New York Public Library

I’m not anti-television, but my son just doesn’t watch very much, mostly because the TV doesn’t get turned on until evenings to watch Broad City and Boardwalk Empire, and unfortunately, by then, my 4-year-old is asleep. In preparation for visiting the exhibit, “Somebody Come and Play: 45 Years of Sesame Street Helping Kids Grow Smarter, Stronger, Kinder,” at the New York Public Library for the Performing Arts at Lincoln Center, we binge-watched Sesame Street episodes for a week after school. It was as if my son had found mecca. What is it about the show that just appeals to kids so much?

Sesame Street debuted on PBS in 1969 with a revolutionary mission: to teach children with television. According to the NYPL, founders Joan Ganz Cooney and Lloyd Morrisett were inspired by commercials to develop a heavily researched show providing bite size lessons to young kids. Almost a half century later, the show still uses educational advisors, developmental psychologists, researchers and television producers to collaborate on curriculums, scripts and testing to make sure kids are actually learning from the show. This exhibit highlights the behind-the-scenes images, footage and documents to showcase the hard work behind each episode.

In addition to the heavy curriculum, the TV show stands out for its talent scouting. The music is by songwriters with Broadway backgrounds, who produce instant classics like “Rubber Duckie” and “C Is For Cookie.” Illustrators like Maurice Sendak and Mo Willems were commissioned to make animated shorts. Animation cels, claymation models and sheet music on the walls revisit the many hits from the show. And of course, when we think of Sesame Street, it is simultaneous with Jim Henson and his Muppets. Throughout the exhibit, it was possible to hear kids screaming with glee around every corner “BIG BIRD!”, “COOKIE MONSTER!” and (with mass hysteria) “ELMO!” These oversized friendly puppets on display behind glass cases, but don’t worry, the fact that your child can’t touch won’t be a deterrent. “That’s the real Ernie and the real Bert, right?” my son reverently whispered to me. A giant chalkboard, a Muppet photo booth, and many videos, buttons and games round out the entertainment.

One of the best characters of the program is the city of New York. Unlike Sex and the City’s glamorized version, this cityscape captures a more diverse and relatable background. The brownstone of 123 Sesame Street where Susan, Gordon, Ernie and Bert lived is replicated here for your kids to climb on. And press a button and Oscar the Grouch will clank out of his garbage can. Blueprints of set design and production photos in and around the city are displayed as a love letter to NY.

After our hour-long visit, we walked across the street to Le Pain Quotidian. My tiny art critic, sighed into his hot chocolate, and said, “I love the Sesame Street museum. It’s almost as good as watching the TV show.”