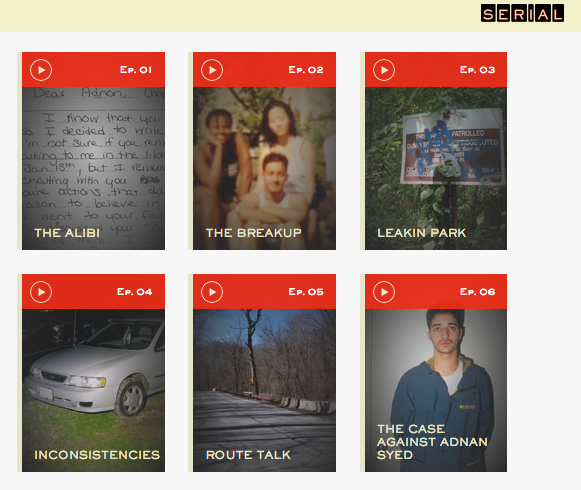 Serial, a new podcast from the creators of This American Life, follows one true story over the course of 12 episodes.

A few days ago, an up-and-coming comedian I like named Josh Gondelman tweeted: “Downloading the first episode of Serial because I may move to Brooklyn soon, and I hear it’s part of the background check.” Until then, I hadn’t fully realized how many other people shared my obsession with this new podcast, a spinoff from my beloved This American Life, named Serial because each episode is a continuation of the last and, together, they make up one complete story arc. In the first, 12-episode-long installment, the focus is on whether justice was served in a 15-year-old Baltimore murder case where the victim, a bright, popular high school senior named Hae Min Lee, went missing after school one day and was found strangled and buried in a shallow grave about a month later. Her ex-boyfriend and classmate, 17-year-old Adnan Syed, was convicted of killing her in 1999 based on the testimony of a mutual acquaintance and has been serving out a life sentence in maximum security prison, and maintaining his innocence, ever since.

Unfortunately, that summary covers pretty much everything we know for certain about the case—the facts are maddeningly elusive, clouded by the passage of time, the unreliability of pot-smoking teenagers’ recollections, and some seemingly shoddy police work and lawyering. The evidence that put Adnan behind bars is almost entirely circumstantial, and the theory of motive advanced by the prosecution depends on some pretty uncomfortable assumptions about his identity as a Muslim-American. For these reasons, it seems at first that Serial is going to be a cut and dried story about vindication and setting right some systemic wrongs of our criminal justice mechanism. This American Life producer Sarah Koenig, the narrator/detective/journalist behind Serial, admits that she was initially drawn into the story because it appeared likely that the wrong guy was sitting in jail.

Once you get below the surface of the story, though, you never feel like you’re on solid ground again. Each reveal by Koenig—a new witness statement, Adnan’s cell phone call log from the day Hae disappeared, Hae’s diary—is subject to competing interpretations, and the result is that you will spend a significant amount of time utterly convinced that Adnan’s is guilty, only to find yourself totally swayed toward his absolute innocence an hour later. It’s like staring at one of those Rubin vases or an M.C. Escher drawing: just when the image you think you’re supposed to see comes into focus, it’s suddenly replaced with a new, equally valid image and you completely lose your connection to what you saw so clearly before. If you’re anything like me, this uncertainty and the long wait for a new episode to come out every Thursday will drive you to surprising places, like the shadowy recesses of Reddit, where more than 5,000 Serial listeners pore over arcane details, posit theories, and dig up things like Google street view maps and local news clippings in an attempt to find definitive answers.

The seventh episode of Serial dropped yesterday, and it’s becoming increasingly clear that we might never know exactly what happened to Hae or to what degree, if at all, Adnan was involved in her murder. Regardless of Adnan’s actual guilt or innocence, though, everyone I’ve talked to agrees that the state failed to prove the case against him beyond a reasonable doubt, at least based on what we know so far. As Koenig points out very early on, someone–either Adnan or the ex-friend who becomes his accuser—is definitely lying about the events of January 13, 1999, but there is no hard evidence that uncontrovertibly establishes who that person is. There is, however, the chilling realization that if the liar is Adnan, always the sympathetic charmer in his taped phone calls with Koenig from prison, we are staring squarely into the soul of a true psychopath.