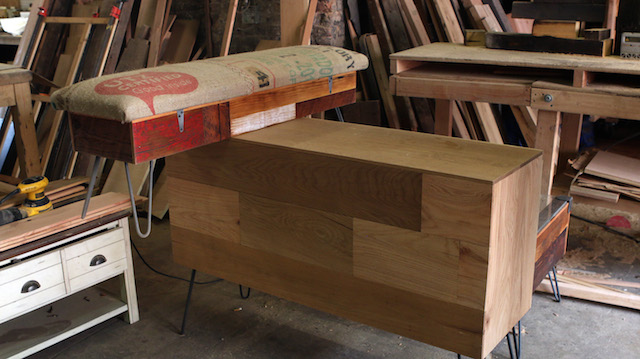 When you start a woodshop in your kitchen, you have to make some sacrifices, starting with dinner.

“We were making dinner and building tables at the same time,” said Matt Loftice, 44, a thick-bearded former screenwriter. “It was a lot of dust, man—dusty pasta.”

Brothers Matt and Steven Loftice share a love for breathing new life into recycled materials by transforming them into furniture. After building pieces on nights and weekends for several years as a hobby, Matt gave the business a name, Recycled Brooklyn, and launched an Etsy shop in 2010. Steven, disenchanted with his career in advertising, quit his job and hopped on board full time, two months later.

Though their price point is slightly higher than entry-level Ikea–items start at around $180–it’s not far off mass market staples like West Elm and Pottery Barn, and their pieces are handcrafted. “I could never afford custom furniture, and most people can’t,” said Steven, 42. “That’s why at 10 o’clock in the morning the line at Ikea is half a mile long.” 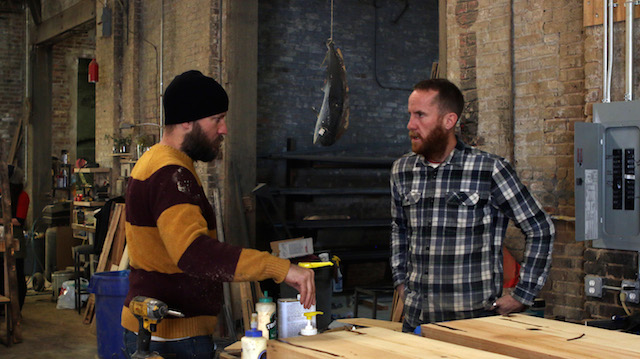 Matt and Steven Loftice have moved production from their kitchen to a warehouse in Red Hook. Photo: Levi Sharpe

The Loftices spent the first eight months building in their kitchen with nothing but an old chop saw and a couple of sanders, dumpster diving for used lumber, Steven said. They have since set up shop in a large brick warehouse space in Red Hook, employing 12 workers.

Steven, tall and thin, with a deep smile creased beneath a bright red beard, stepped away from the bench he was building on a recent afternoon to recount the story of their first commissioned piece—a desk made from a door that he found on the street. He passed by it while walking his dog and lugged it back home in one hand, leash in the other, he said with a laugh.

Brooklyn’s construction boom has created a steady supply of materials. “All throughout Greenpoint, Williamsburg, all over the place, every other building is being renovated,” he said shouting over a mixture of rock music and the high-pitched squeal of table saws. “I don’t think this stuff was meant to be buried, it’s terrible.”

That’s not just sentiment for Brooklyn’s crown moldings and pocket doors speaking. Each year 128 million tons of demolition and renovation debris ends up in landfills in the U.S. As reported by Pacific Standard, Ikea consumes a stunning 1% of the world’s commercial wood supply for all those inexpensive bookshelves and desks.

Earlier this fall, Habitat For Humanity featured Recycled Brooklyn’s work at the organization’s 30th anniversary gala at Cipriani Wall Street, Steve said, highlighting them as a builder working to reduce waste in the construction trade. At their Red Hook production space, Steven walked over to three pieces that were featured at the gala. One of the major hits, he said, was their coffee sack storage bench ($450). The seat is upholstered with used coffee bean sacks donated from local roasters like Cafe Grumpy, Oslo and Stumptown.

Most of Recycled Brooklyn’s work, like a salvaged fir and iron nightstand ($425 ), and a coffee table with mesh steel ($600), are made from old floor joists, from which the nails and screws have been painstakingly removed, Steven said. Other pieces, like some of their dining chairs, which run about $300, are made from used whiskey barrels, incorporating the curve of the wood into perfect chair-backs and seats. 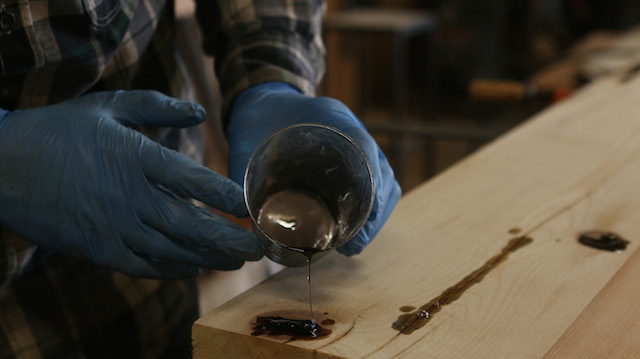 These days, most of their wood comes from contractors with whom they’ve built relationships over the years. One of their most recent pickups came from the demolition of Bowlmor Lanes in Union Square. Steven pointed to a large half-finished menu board for the restaurant Veselka in the East Village, made from what were once lanes at the 78-year-old bowling alley. Reusing doors, scrap wood and other pieces of a changing city isn’t just about utility and thrift, it’s also about memory, he said.

“It was like an institution for New York City,” Steven said about Bowlmor, furrowing his brow. “Now it’s all in a giant pile smashed into pieces just going in the trash—nobody even thinks twice about it.”

They make the majority of their pieces to order, many coming from businesses wanting to add something unique to their decor, Steven said, however, you can also find him at the Brooklyn Flea in Williamsburg and Fort Greene on the weekends, chatting with customers and soliciting design notes.

In addition to reusing landfill-bound materials, Recycled Brooklyn collaborated with makers who can use their leftovers. Ingrid Carozzi, owner of Tin Can Studios in Red Hook, builds many of the flower crates for her floral business using the scraps of their scrap-wood. “They’re really kind to let me dig up their garbage,” said Carozzi, taking a pause from firing at some crates with a large staple gun. “We just help each other out—it’s kind of the Brooklyn collaborative thing.” 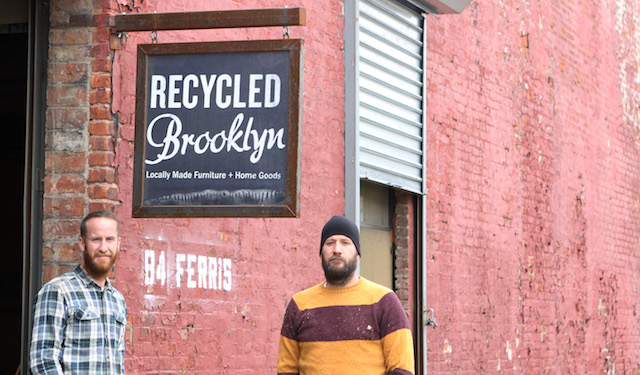 Although Recycled Brooklyn continues to grow, there are still major ups and downs. They’re not immune to the common small business complaint that the taxes “squeeze you to death,” Steven said. Accomplishment and independence though, trump the challenges of running a business in New York City.

“I would never want to do anything else,” he said while slowly dripping dark brown epoxy into the cracks of some recently sanded wood. “Except play baseball, but I’m too old for that now.”