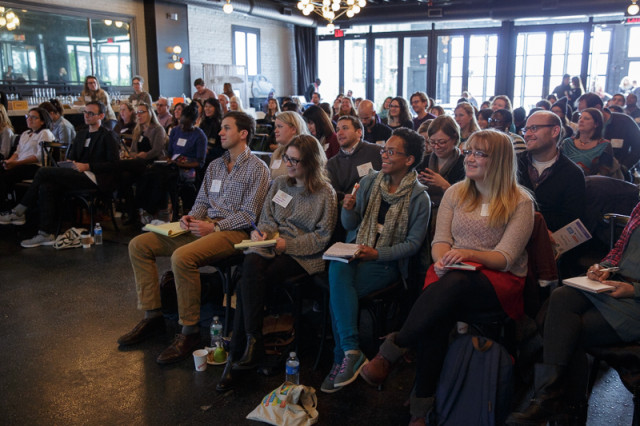 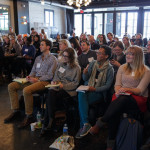 We got as much enjoyment out of IMC as this crowd. Photo: Alison Brockhouse 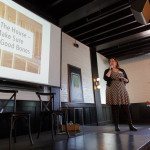 Margit Detweiler talking about the launch of Tue/Night, one year in. Pro tip: “Build the house, and make sure it has good bones.” Photo: Alison Brockhouse 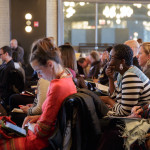 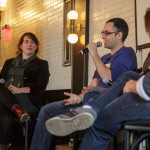 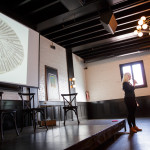 Katarina Hybenova of Bushwick Daily sharing her vision for Village, a new platform for hyperlocal blogs. We think it will pay off. Photo: Alison Brockhouse 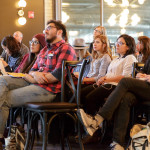 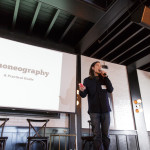 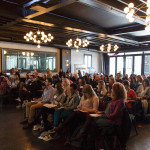 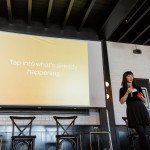 If you can’t produce your own event, consider partnering with an existing one–advice from Angela Giacchetti of Eventbrite. Photo: Alison Brockhouse 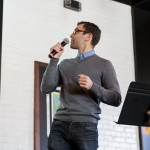 Jeremy Schwartz of Squarespace showed us sites that go “beyond the scroll.” Photo: Alison Brockhouse 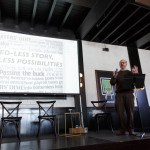 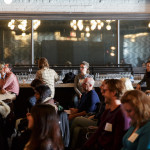 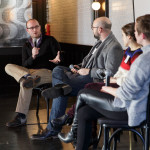 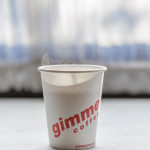 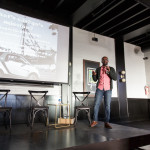 John Asante of car2go. Fun fact: You can take dogs in them (as long as they fit in carriers). Photo: Alison Brockhouse 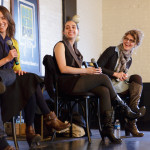 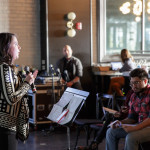 Laura Hibbard of Refinery29 gave the crowd so many good pointers on the power of specific types of images on social media. Photo: Alison Brockhouse 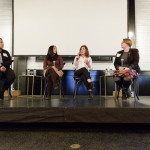 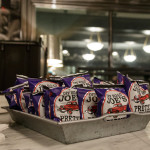 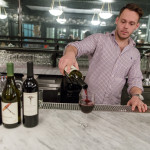 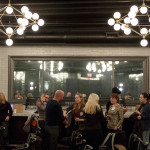 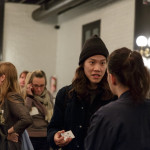 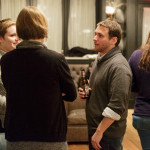 “Sometimes you mess up the pancake and you have to make a new pancake.”

Sandra Allen, deputy features editor at BuzzFeed, cracked this joke at Indie Media Camp in relation to stories that don’t become the “hits” you expect them to be, but she may as well have been speaking about the entire business of independent media. On Thursday, we heard from 25 great speakers–editors, writers, CEOs, marketing managers, social media pros–all of whom taught us a great deal about what it means to make something stick online, whether it’s a great headline that will inspire you to click through, the kind of photo that will get repinned thousands of times, or your own site, into which you’ve poured your heart, time and hard-earned money.

We want to thank everyone who came and our IMC sponsors: car2go, Squarespace, MailChimp, Eventbrite, Greystone Cellars from Terlato Wines, Brooklyn Brewery, Gimme! Coffee and The Joe Tea & Chips Company. Without them we couldn’t have offered a reasonable ticket price. So many conferences cost hundreds, plural, of dollars to attend, making them prohibitively expensive to bootstrapped start-ups and indie media folk like ourselves. Many thanks also to 501 Union, Purslane Catering and Be Better Studios for making everything look and taste so good.

We’re also very grateful to the speakers who ducked out of work early or spent the entire day with us, took the time to prepare talks that inspired and informed us, and were candid about their experiences. Since we didn’t film the entire day, we’re going to share some highlights from IMC the old-school way.

-In our first panel on bootstrapping your site vs. finding outside funding, Amanda Hesser, CEO of Food52, was forthright about how she and co-founder Merrill Stubbs went about financing the site. “There are founders who can sell a dream,” she said. “Sadly, we’re not those people.” Instead she used her savings and they secured a book deal worth $100,000 to help keep it going for the first 18 months. “We knew we could do a lot with it, if we did not pay ourselves.” Ned Burke talked about the benefits of selling his blog Sheepshead Bites to the local blog network Corner Media. “For six years I was a one-man band,” he said, who didn’t have the bandwidth to pursue big ideas. “Now I’m working on new products and that’s a really great thing.” And Jake Dobkin, publisher and co-founder of Gothamist offered up life advice, by way of suggesting that as a small business owner you make peace with cultivating a sense of what is enough for you. “I’ve spent time with a lot of people trying to get rich, trying to get famous or both, and they are the most unhappy people you will ever meet.”

-Katarina Hybenova unveiled the new platform, Village, that she’s been working on developing for her site Bushwick Daily, and going forward, other hyperlocal bloggers. The cool thing about the platform and corresponding app is that it provides a subscription model for two kinds of users–the loyal readers who get perks like swag through membership, and businesses who can then post discounts and events targeted to the readers. She’s currently crowdfunding for it, and offering some sweet rewards for donating money.

-Justin Lin, founder of the photo school BKC Brooklyn Central, gave a brief but info-packed workshop on taking pro photos with your iPhone. We cut him way shorter than his lesson deserved, but he exposed the hidden manual tools available on the iPhone and the best ways to set up a portrait shot, and how to adjust the exposure for those photos you take of meals in dark restaurants. He’s going to be reviving his full iPhoneography course in the winter of 2015, so stay tuned.

-Margit Detweiler shared her lessons learned since launching Tue/Night a year ago. She created this site filled with stories that speak to Gen-X women in their late 30s and 40s because no other media outlet was doing it, or at least doing it right. As founders ourselves, there was a lot we identified with in her story, particularly the insight that came to her from her colleague, Kat. “You know,” she said, “if we keep on the same course we’re on, we’re going to be in the same place next year.” We know this well. Working in online media means you always need to be innovating, working smarter than the year before. This is also one of the reasons we enjoy producing Indie Media Camp, because we always walk away with a greater understanding of what we can be doing better ourselves.

-Our sponsors car2g0, Eventbrite and Squarespace all delivered great presentations of their own. John Asante of car2go, the on-demand smart car rental service, spoke about its 400-car rollout in Brooklyn and the plans to triple that number next year. Angela Giacchetti of Eventbrite spoke about how to effectively plan events–namely to think of the stories your attendees will tell, and to work backward from there. And Jeremy Schwartz of Squarespace culled very visual sites from Squarespace’s own users to show how the typical blog scroll is being eclipsed by sites that use thumbnail images and categories to display their most popular stories, instead of their most recent.

–Jere Hester, currently director of the NYCity News Service and a former Daily News editor started his how-to on headline writing with a game only media nerds would love–guessing the correct news source of specific headlines, like “24 Reasons You Should Never Take a Picture with An iPad” (BuzzFeed, of course). He then awarded winners with a copy of his book Raising a Beatle Baby. If only all talks started this way! His tutorial was one of the best of the day, offering simple advice to keep headlines to the 6-8 word range, and imparting the same tip he got just starting out–“it’s got to speak to people.”

-Our food writer Brendan Spiegel, who is also the co-founder of storytelling site Narratively, moderated a great discussion with Kate Lee of Medium, Sandra Allen of BuzzFeed, and Aaron Lammer of Longform about why pitting longform stories against, say, quizzes, is missing the point. They’re entirely different beasts, and measuring the success of a longform story has less to do with the number of pageviews than the actual time spent on the piece. Total Time Reading–TTR–is actually a metric Medium uses, and incidentally, the stories that do best on that platform happen to be roughly seven-minute reads, or just under 2,000 words. Lammer’s own unofficial survey of the best performing longform content came down to three categories: “Crime, sex and productivity–these are the things that people love to read.” So if you want to start a true-crime vertical, you should do it now, because someone else who was in that room will.

-The social media editor of Refinery29, Laura Hibbard, nearly blew our minds with the tips she shared in her presentation about the images that perform best on Pinterest, Instagram and Facebook. Like, of course pictures of healthy food would do well on Pinterest–it’s an aspirational platform. They also don’t pin photos of model’s faces for the same reason, because it makes it easier to insert “yourself” into the picture. For Instragram, highly saturated colors work well, and they spend a lot of time crafting the perfect shot for Instagram, often in a studio. Not all of us have the staff to work on social media like they do–we certainly don’t–but a workaround is giving your Instagram feed over to a rotating cast of contributors and artists each week, like Bushwick Daily.

-Alexis Anderson, head of partnerships at BarkBox, led a fascinating conversation between Lawrence Marcus of Food & Wine, Carey Polis and Rochelle Bilow of Bon Appetit and Stacie Grissom of BarkPost about how to create content readers love, and how to get it out to places where they will read it. The big takeaway? Create a consistent voice on your social media platforms and watch how things perform. Don’t just throw the same things out on Twitter and Facebook at the same time. And, there are a lot a famous dogs on the internet.

-Our last panel was the most provocative of the day, an important discussion between four women: former Jezebel editor Dodai Stewart, writers Soraya Chemaly and Jill Filipovic and ACLU lawyer Lee Roland, on the topic of online harassment and free speech. Roland explained the fine points of First Amendment rights, clarifying that as horrific as misogynistic online comments are, they’re not a crime, or subject to censorship, while Chemaly argued that platforms like Facebook and Twitter do have terms of service agreements that they can use to take sexist trolls offline. In fact they have a moral, if not legal responsibility to do so, and their lack of action is a continuation of sexist structures in society. It was disheartening to hear about the rape threats and graphic gifs these women have all had to endure–as Stewart put it, “Any woman who has a voice online is subject to abuse.” What was inspiring was that not one would be silenced. Roland also saw glimmers of hope ahead, that while men made up the majority of early Internet users, that balance has tilted finally, and what we are seeing is “the dying gasps of a fading patriarchy.” Trolls in basements all over the world—your days are numbered.

As always, we tried to cram in as many teachable moments as we possibly could in one day–perhaps too many. But we left inspired and energized by it all. If you came, we hope it had a similar effect on you.