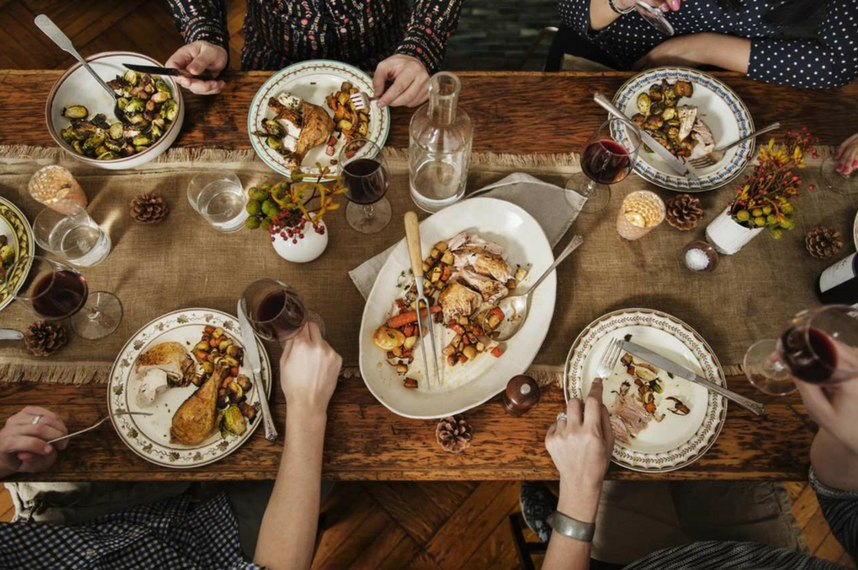 Ah, Thanksgiving, a magical holiday that gathers friends and family around a table filled with flowers, candles, food and an obscene amount of wine.

Whether you’re hosting a traditional Thanksgiving, or a Friendsgiving before you head to the family homestead, coordinating a big dinner can be hard work, and unexpected issues can crop up before, in the middle and even after the event.

Over the past few years I’ve become a Friendsgiving pro, hosting a group of pals each year before we all scatter across the country, but these lessons work for any big dinner party. Here are a few tips and tricks that can lighten your workload, streamline your planning, and help make your holiday as easy as pumpkin pie. And as sweet as pumpkin pie. And as delicious as pumpkin pie. 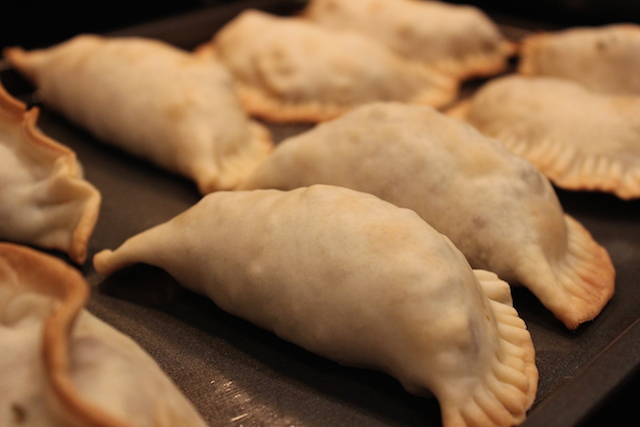 Provide some appetizers, like empanadas, so your guests don’t overdo the pre-dinner drinks. Photo: Gabrielle Sierra

Go potluck, but keep a list. And enforce it.
Whether you’re hosting eight guests or 30, a potluck is the way to go. Think of it this way: if you were solely responsible for cooking every dish you’d run out of time, space and money before the event even began.

My general rule of thumb is to make the turkey and gravy and some appetizers for pre-dinner snacks and then let the guests bring the rest. If there’s something you’re incredibly attached to and won’t be happy without, like mashed potatoes, make those, too. You’d be surprised at how many people have a signature dish or something from their childhood that they’d jump to recreate. And for those who can’t or won’t cook, a big loaf of bread, store-bought desert, or extra bottle of wine will never go to waste.

The one thing you want to make sure to do is to keep a general record of who is making what. It doesn’t have to be exact down to each ingredient, but it is good to know how many people are bringing sweet potatoes.

I discovered this during the Friendsgiving of 2006 after I found myself holding two different bowls of homemade sweet potatoes. Inevitably, Potato Dish One got compared to Potato Dish Two when passed around the table. (Spoiler alert, the one topped with whipped marshmallow beat out the one topped with peas.) I had to shove double servings into my already full belly and force those around me to do the same in order to make the cook behind pea potatoes feel better. Don’t resort to this–keep a list and let people know if a dish is already covered. (Last year my Thanksgiving ended up with seven, yes SEVEN different kale salads because I didn’t have people sign up for sides. Only in Brooklyn. –Ed.) 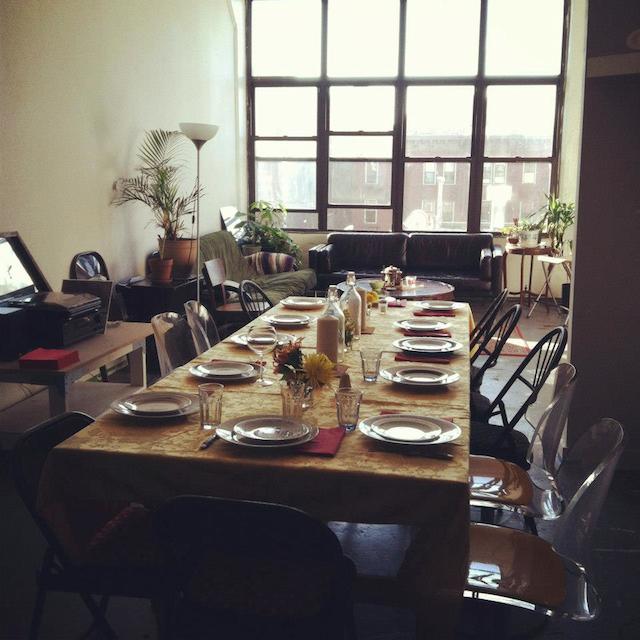 Your table doesn’t have to look this perfect, but do try to gather around a table. Photo: Gabrielle Sierra

Use disposable flatware but not disposable cookware.
It’s always tempting to break out those adorable Fishs Eddy New York skyline plates. And sure, if you have a dishwasher and a group under 10 using real flatware will look really nice and be worth the extra work. But for large groups it’s best to go with disposable plates and paper napkins. It may not sound appealing, especially if you’re intent on setting the perfect Instagram-worthy table, but these days they make thick and rather nice biodegradable plates that come in a variety of shapes, sizes, and colors. Ikea sells paper napkins in tons of great patterns, (and they have the best deal on wine glasses anywhere). Cleaning becomes much easier, and no one is stuck at the sink. Plus, even with a dishwasher and disposable plates, you will still have more serving bowls and platters than you can handle in one go. Might as well cut down on the work.

The one thing you don’t want to go disposable on is your turkey pan. It may be tempting–you probably don’t own anything that big and they sell perfectly good aluminum ones at the deli around the corner.

But just do the math: turkey plus all the basting liquid, plus any extras you decide to throw in there, plus a flimsy bottom? Well, let’s just say that Friendsgiving 2010 found two of us trying to lift a 28-pound turkey out of the oven after a full day of roasting and basting only to have the sides collapse inward and the scalding hot greasy liquid go pouring all over the oven, my dress, our legs, and the floor just as the first guest rang the doorbell. I had to pull a quick costume change and the oven smelled like burned grease every time we had to re-heat a dish. On the upside, the dog was delighted and spent the evening licking the floor like a wild beast. (If you have a crappy apartment oven, and who doesn’t, make sure to put the turkey on the bottom rack–a big bird once bent the baking rack it was sitting on in my oven–luckily it only had a few inches to fall, disaster averted. -Ed.) 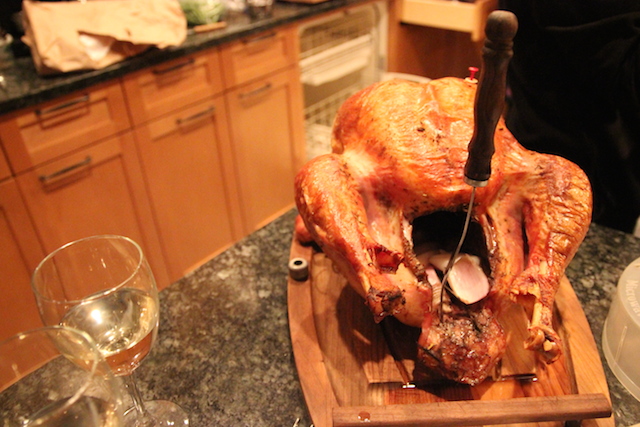 Take control of the turkey–it’s the main event after all. Photo: Gabrielle Sierra

Gather together around a table…
…if you can. The limitation of living in a small New York apartment does not always allow this to be an option. But if you can manage to fit everyone around a table or several tables pushed together, it’s for the best. A buffet tends to break up the dinner and feels more like a regular party–people sit in smaller groups and avoid food that is hard to cut in their laps. It also discourages conversations from going around the table and can leave some guests out of big toasts or games. It can also be harder for you as a host, as you will spend your night going from group to group attempting to talk to everyone.

Friendsgiving 2004 was the only time my friends and I tried a buffet-style dinner. We thought it would make everything easier and avoid the inevitable mishmash of chairs and stools along different sized folding tables. But guests wound up gathered in several different rooms and new friends seemed a bit thrown off by the idea of squishing onto a love seat with someone they just met. Table seating is much more intimate and makes the dinner feel homey. (I love going around the table and quickly shouting out one thing that each person is thankful for at the beginning of the meal, it’s much harder to do when the group is scattered. –Ed.)

Have some after-dinner fun.
Okay so you played house, now it’s time to play bar. Once everyone has finished their meal and you’ve stored the extras away, grab the rest of the booze and get ready to party. Be it a “Never Have I Ever” game or college-style beer pong tournament, find a way to get everyone to stick around and make a night of it.

The holiday season can be a tough time to see friends–everyone heads home to visit their families and calendars are dotted with work parties and shopping trips. This is the perfect moment to have everyone together in one place, safe, warm and ready to cut loose. Crank up the tunes, take off the heels, and set the stage for a great night.

Of course depending on your group of friends, amount of space, and preferred party atmosphere, plans for after dinner fun can run the gamut. Friendsgiving 2005 was particularly rowdy. Following a delicious dinner we all passed leftover bottles of wine around the table. This then evolved (or devolved depending on how you look at it) into a raucous game of wine flip cup and a dance party. In 2012 after-hours Friendsgiving meant fancy cocktails, hilarious holiday stories, and a particularly entertaining Scottish accent contest.

Regardless of your idea of fun, make sure to have everyone stick around and ride out the night together. Lock the door if you have to.

Have containers for leftovers on hand.
Let’s talk about leftovers. There will inevitably be too much food, which is a good problem to have. (There is nothing worse than running out of food when you are hosting a group of guests.) But there is a limit to how much turkey, stuffing and carrots you can fit into your fridge and you want to avoid as much waste as possible.

Do yourself a favor and provide everyone with a container to fill with leftovers. Depending on your budget and preference you can buy some Tupperware at your local 99-cent store, or hit up your local Chinese food take-out place and ask to buy a bunch of boxes. Let your guests pick what they want before you start boxing everything up and putting it away. In a pinch, ziplock bags filled with gravy, potatoes and stuffing make a slightly insane, but Thanksgiving sandwich-ready to-go container, and they’re cheap. Or, you can just attack them with a spoon while binge-watching movies all weekend.

I learned this the hard way in 2011 when a group of twenty-nine guests brought more food than I could have ever imagined. I quickly ran out of plastic containers to send people home with and wound up with a refrigerator filled to the brim with food. This was exciting for about a day, and after that it became a sort of torture as I forced my friends to eat turkey omelets with stuffing on the side, re-heated macaroni and cheese with gravy, and even created a large pot of really disturbing brussels sprout soup. Give leftovers away while you can, and be sure to bring some over to your neighbors as a way of greasing the wheels for any loud music your after-party may bring.

With these tricks of the trade in mind, go forth and Friendsgiving. Make sure to take time and sit down, drink wine and eat the food. Don’t spend the whole party planning and cleaning and making sure everything is perfect. Just relax and enjoy being surrounded by your favorite people–that’s what the holiday season is really all about anyway. That and the pie.