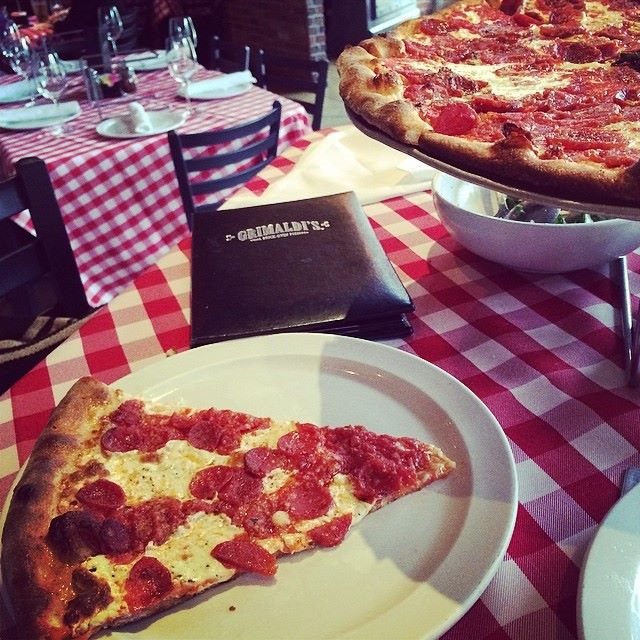 While we’re often all about the new spots here at Brooklyn Based, in our latest series we’re taking a second look at some of Brooklyn’s most venerable restaurants and investigating whether these long-lauded establishments are still worth the hype, or coasting by on name recognition alone.

First up: Grimaldi’s Pizza, the thin-crust joint that has held court on the same DUMBO block since long before anyone in Brooklyn thought up cutesy neighborhood names like DUMBO. While every NYC tourist guidebook sings the praises of strolling across the Brooklyn Bridge and ending your walk with a pie at Grimaldi’s, I haven’t been myself in several years because…well, because every guidebook tells tourists to go there. That daunting line stretching down Old Fulton Street may have been worth it back when good Neapolitan pizza was a rare find in NYC, but now that nearly every neighborhood has a Franny’s, an Emily or a Brooklyn Central, a pizza pilgrimage to Grimaldi’s seems less essential. Plus, the last time I was there a few years back, I had a rather underwhelming experience, with a decent but slightly soggy crust that made me wonder if Grimaldi’s, now a growing national mini-chain, was resting on its laurels.

Is Grimaldi’s really worth the hype, and the interminable lines? Photo: Grimaldi’s

And when founder and former owner Patsy Grimaldi’s opened rival Juliana’s just down the street, any reason to go to Grimaldi’s seemed gone for good. (A refresher in case you’re unfamiliar: Grimaldi’s moved two doors down the block following a landlord dispute in 2012; Juliana’s opened in Grimaldi’s old space, taking over its rare coal-fired oven; Grimalid’s eventually got permission from the city to install a new coal oven of their own; a bitter lawsuit between the two pizza shops ensued.)

I happen to think the pies at Juliana’s are among the best in the city, so I regularly tell any visitors to skip the line at Grimaldi’s and opt for Juliana’s instead. Both of these old-world pizzerias focus on mastering the basics of the classic pie. You won’t find any bacon jam or pickled cauliflower here–think more a simple margherita pie with homemade sauce, a moderate amount of fresh mozzarella, a little basil and maybe an Italian pork product of your choice. But what sets the pies at Juliana’s apart is the crust. The coal-fired oven generates a hotter flame than brick, wood or gas pizza ovens can, allowing them, in just a few minutes cooking time, to develop a crust that is nicely charred on the bottom, thin and crispy as can be, but still cooked through and firm enough to hold the weight of a slice so that you can eat with your hands, no knife and fork required. While there are plenty of Brooklyn spots turning out very good brick-oven pizza, without the coal oven they can’t achieve a crust that’s quite this perfect.

But over the past year I’ve heard rumblings that Grimaldi’s, perhaps responding to the increased competition, was stepping up its own game. A few local friends reported that the new iteration of this old-school pizzeria was once again turning out superior pies. And the buzz about Juliana’s seemed to die down a bit, with their own streetside line gradually shrinking. It does seem the tourists have gone back to Grimaldi’s—when I stopped by last week there was the standard 30-person line at Grimaldi’s and no one waiting outside Juliana’s. I had to see what was up.

I stopped by for lunch, and ordered takeout in order to skip the line (you can then chow down on the street while the freezing hordes who are waiting look on enviously). I have to say that Grimaldi’s kitchen is turning out a nicely solid, slightly charred thin crust with tasty mozzarella, just-a-tad-sweet marinara, and oven-roasted peppers that add a hint of spice. Their classic pizza is solid and at $14 for a pie that easily serves two, it’s not at all a tourist trap in terms of price.

It’s a good pizza though, not a mind-blowing one. Good enough that I’d never turn one down, but not good enough that I’d wait outside on a line for it. Because of that beautifully charred crust, I still give the Old Fulton Street edge to Juliana’s…and on my way back down the block I couldn’t help but want to tell a few of the shivering tourists that they can get an excellent pie just down the block, minus the wait. My guess is they’re not going anywhere though.