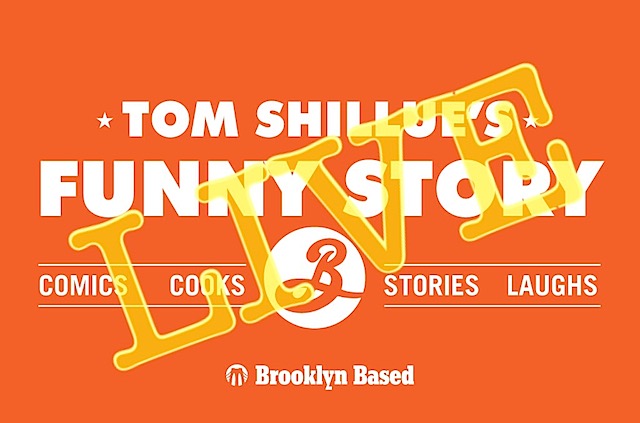 Every month we co-produce a storytelling show at Brooklyn Brewery with comic and storyteller, Tom Shillue. If you’re into the storytelling scene, then you know that most shows have some sort of rules–no notes, strict time limits and themes. Our only rule is that the stories have to be funny in some way. As Tom said at last month’s show, “We’re like the sloppy Moth.”

From time to time we round up a few good stories and turn them into a podcast–here’s our third episode. Tom shares a story about getting cast in a pilot when he was an aspiring comic in New York City in the late 90s, Dave Konig tells us about a show that almost didn’t happen, and probably shouldn’t have, in Secaucus, New Jersey. And journalist Peter Licursi tells a tale about a visit to a Turkish orphanage gone terribly wrong.

Listen now on SoundCloud, or subscribe in iTunes (the new episode will be up shortly).

Escape the gravitational pull of your couch tonight and come see us at the Brooklyn Brewery at 8:30 for the first Funny Story of 2015. We have a particularly good line-up featuring Charlie Hankin a cartoonist for the New Yorker who is also a UCB member, a Roger Hailes a writer and comedian who has been on Comedy Central and Jimmy Fallon, author Peter Pavia and Anna Dunn, editor of the Diner Journal and aspiring crime fiction novelist. Your $10 ticket includes a beer.