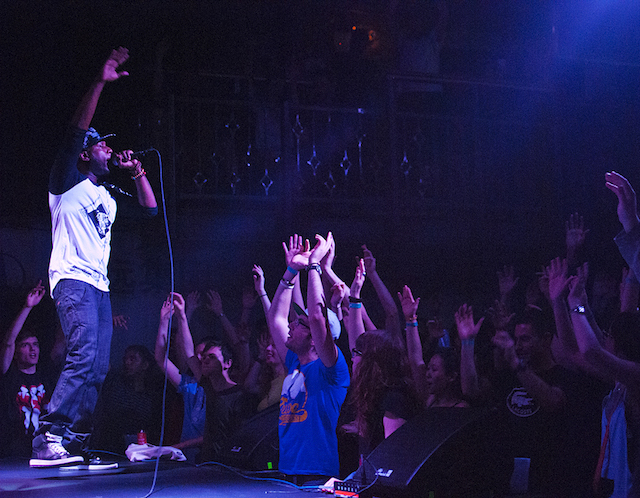 “You’re probably getting used to hearing news like this in Williamsburg,” Glassland Gallery began its self-penned obituary last year. “So we’ll cut right to the chase: this New Year’s Eve will be Glasslands’ final night of music.” The closing of the legendary performance space capped a brutal year for live music in Brooklyn, as it joined nearby Death by Audio and 285 Kent on the list of DIY venues that bit the dust in 2014.

None of these establishments specified reasons for closing, but one need only glance at the plans for the neighboring Domino Sugar Refinery, and Vice Media, to see that developers were involved. The fear that real estate may have finally defeated nightlife in the battle for the borough’s soul manifested itself most clearly last month when a group of artists held a dance party funeral for Williamsburg.

Of course, Brooklynites are nothing if not enterprising. For every cherished dancehall that falls, two more take its place. And while Glasslands has no immediate plans to reopen, there are plenty of other venues to be excited about in 2015. Here are five places to catch live music in North Brooklyn this year, from DIY spaces far from the high-rise land rush, to more easily accessible venues in prime areas. We’ve included as much info on their leases as the venue owners would divulge, so you can time your visit accordingly. 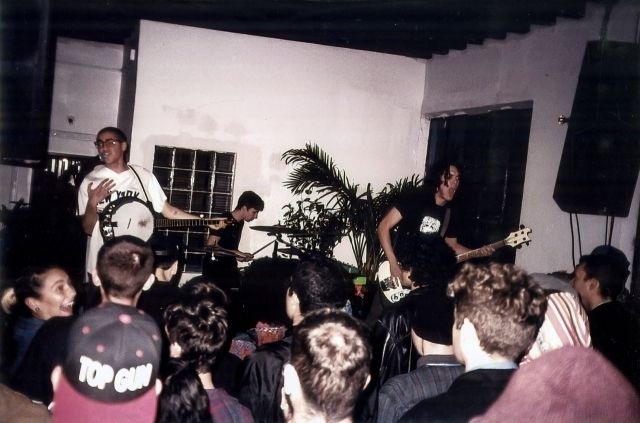 For a venue named after the most barren reaches of West Texas, the area surrounding Trans-Pecos is no wasteland. Legendary concert organizer Todd P’s all-ages venue sits on the southeastern border of “Ridgewick,” the Queens-Brooklyn amalgam that has been up-and-coming for half a dozen years now. The space, which formerly housed Silent Barn (see below), shows its love for the neighborhood by hosting regular community programs, like weekly ESL classes. Come nighttime, Trans-Pecos transforms into one of the city’s most welcoming stages for outsider music. This fall its rotating cast of curators landed Mount Eerie (formerly the Microphones) and bodega-and-subway rapper Ratking. And, for those still not convinced the trip almost all the way to Evergreen Cemetery is worth it, consider that Trans-Pecos is striking distance from both a wood-fired pizza place and a local wine and cheese bar that “shriek ‘Brooklyn,’” according to the NYT. What further validation could a neighborhood possibly want?

Don’t Miss: Any event curated by Excepter, the electronic alchemists who’ve been holding down Brooklyn for more than a decade. Their next lineup will feature DJ sets from Excepter members (1/23, $8). 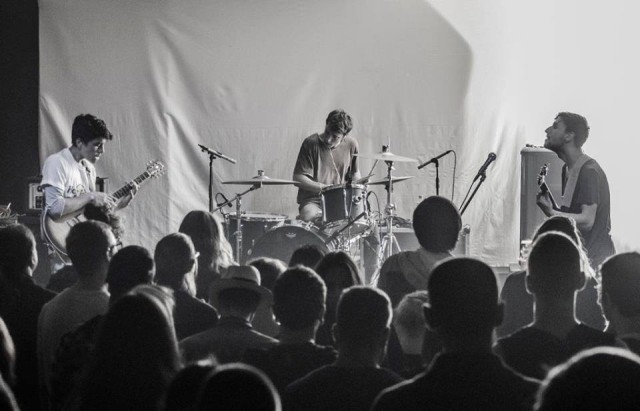 Now that Goodbye Blue Monday is gone, Palisades reigns supreme as the preeminent live music venue underneath the Bushwick portion of the JMZ. Okay, so it’s not exactly hot real estate, but that’s why co-owners Ariel Bitran and Leeor Waisbrod say they chose it. From the street, their mighty backline is but a whisper compared to the roar of trains overhead. This affords Palisades a freedom with the dial many of its peers would kill for. On a regular night, you’ll probably stand in a crowd of about twenty 20-somethings, while artists with culture-jamming monikers like Steve Sobs or Brat Pit duet with the venue’s projectors. But don’t let this fool you—Palisades has pull. Some big names, especially of the loud and/or fast variety, have made the trek down Broadway in the past year, from emo-rap enigmas Yung Lean and Earl Sweatshirt, to skatepark punks White Lung and Trash Talk.

Staying Power: Palisades is silent on this front. Check it out before the mystique evaporates. 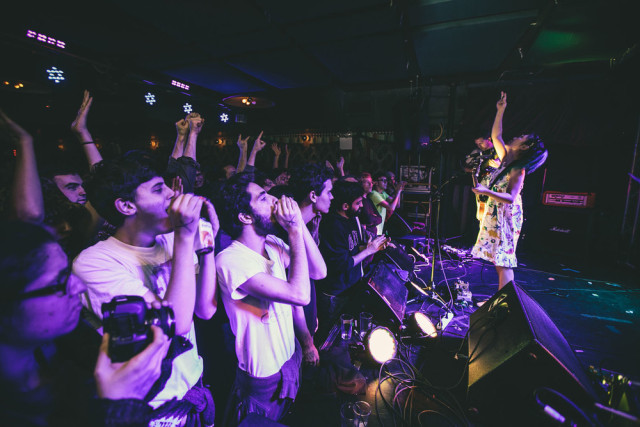 Then again, a performance space beneath an elevated train track isn’t everybody’s idea of a good time. For better atmosphere on Broadway, try Baby’s All Right. Located adjacent to the Williamsburg Bridge, the one-year-old bar, restaurant, and music venue is making waves with its adventurously curated live shows. Its New Year’s Eve bash, which featured performances from Mykki Blanco, Perfect Pussy, Haybaby, Life Size Man, Sunflower Bean, and more, was arguably the best lineup in Brooklyn that night. Other oddball gatherings they’ve hosted include a Grateful Dead-themed brunch DJ’d by Animal Collective’s Geologist and a birthday celebration in which indie rock jackass Mac DeMarco popped out of a giant cake with a cigarette dangling from his lip. Admission to Baby’s can be a little pricey, but co-founder Billy Jones says the venue plans to host more $5 afternoon shows in 2015.

Staying Power: “We feel in 10 years [the area’s] going to be reminiscent of how North Williamsburg is now, and we plan to be on the ground then,” says Jones. Because they wouldn’t comment on the exact terms, we presume this is their way of saying, “We have a long-term lease.”

Following a break-in, a shutdown from the Department of Buildings, and a fundraising shortfall, the original Silent Barn at 915 Wyckoff Avenue wisely called it quits in 2011. Its founders then spent more than a year searching for a home for their artists’ collective and community performance space. Last New Year’s, they found one. Minutes from the Myrtle-Broadway JMZ, the new and improved Silent Barn is a 10,000-square-foot, three-story testament to DIY perseverance. After some renovations, the site now houses dozens of artists’ studios, eight residential tenants, a community garden, and more trippy murals than ever before. Shows last year included a performance by Eric Copeland of Black Dice (the experimental noise outfit championed by Animal Collective) and a special pop punk reunion of P.S. Eliot. For 2015, Silent Barn is offering membership pins for $25 a month, or $300 for the year. Restrictions may apply to David Bryne. 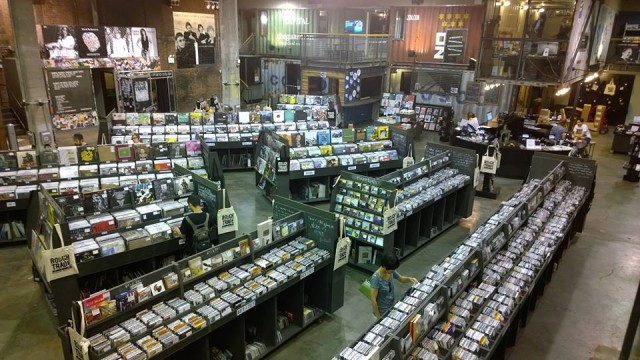 Asked in 2013 why it was taking so long to get his Williamsburg vinyl shop off the ground, Rough Trade founder Geoff Davis responded it would open “when all the other record stores in New York have closed down.” You’ve got to wonder whether those extra months soundproofing and renovating the store’s concert space were also a clever ploy to outlast the competition. Located just ten blocks from the former Glasslands with an identical 250-person-capacity, Rough Trade NYC is poised to fill the live music vacuum in waterfront Williamsburg. A partnership with Bowery Presents gives the venue access to festival-grade talent, like tUnE-yArDs and Little Dragon. Although our list is primarily dedicated to highlighting venues a little farther afield, this neighborhood sorely needs a home for live music. Here’s hoping these vinyl peddlers have the business savvy to stay afloat in condo territory.

Leave a Reply to Mike Lenowsky