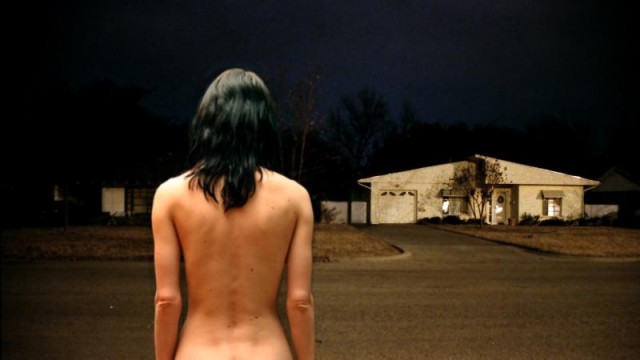 In all my years interviewing musicians, I’ve never before watched one prepare borscht in the kitchen of her cozy Greenpoint apartment. But that’s what happened when I spent a wintery evening with singer Leanne Macomber of the electronic music duo Young Ejecta. That scene of homey domesticity contrasts with the singer’s striking, Ziggy Stardust-like persona–Young Ejecta isn’t just the name of the band, it’s Macomber’s character, a naked, newborn adult viewing the world through fresh eyes. While she performs in basic black or white, Young Ejecta appears naked, almost freshly hatched, framed by darkness and floating in space on the group’s 2013 debut album Dominae and the accompanying videos, as well as on The Planet, the new EP they released this week.

Creating Young Ejecta wasn’t about shock value, rather, it was about rejecting and reframing the way women are viewed in the music industry, Macomber explained.

“Being a female musician, I think it’s sort of like, ‘Oh, what is she wearing? Oh, how does she do her hair?’ There’s always those sort of expectations that you’re attractive and put together, so people can identify you through your music,” she says, as the soup simmers on the stove. “I’d rather somebody talk to me about the music. I wanted Ejecta to seem like she’s floating in space, this is timeless, classless, without markers of sexuality and things like that. It was important to me that she didn’t have a fashion look, and that there wasn’t any to define [her] like, ‘What is Ejecta wearing at Coachella?'”

The different set of expectations for female musicians became clear to Macomber when she was playing guitar with the band Neon Indian. “I think I might have been really sensitive to it…being the only girl in Neon Indian, where they [music writers] ask everyone in the band, ‘So how long have you been playing drums, blah blah blah,’ and they get to me and say ‘How do you get to stay in shape on the road?’ And I’m like, ‘Fuck!’”  (mildly NSFW images after the jump)

She also pointed out that creating a persona is broadly helpful for being a more compelling performer. “I don’t know why more people don’t make up some Ziggy Stardust,” she says, laughing, “I’m making borscht–I’m not the most interesting person in the world, but I’d like to think maybe Ejecta is more interesting.”

Young Ejecta (they were originally just called Ejecta), was formed after Macomber met Joel Ford on tour with their respective bands Neon Indian and Tigercity. The name comes from volcanology–ejecta is volcanic sediment that settles in the ocean’s bottom after an eruption. “It had to do with the idea of rebirth,” says Macomber. “Another reason why Ejecta is always naked is because she is always reborn. She doesn’t know she is naked–she is just a newborn.”

On Tuesday, Macomber and Ford released The Planet, the follow-up to last year’s Dominae, and they’ll play an album release show at Baby’s All Right on Feb. 20. Graced by Macomber’s sensual singing, the music is a combination of lush soundcapes, danceable beats, and moody yet melodic pop–from the stark “Recluse” to the Eurodisco-influenced “Into Your Heart.”

The songs on The Planet were written alongside with the Dominae songs but didn’t end up on the actual album at the time.

“In my mind I wanted to make a full-length record,” says Macomber, “and it was just so crazy because Joel has been doing so much mixing and producing and working on a ton of stuff, so I had to wrangle him. And then I was like, ‘Okay fine, we’ll make a mini-record.’ But I found while we were doing it that I really liked the shorter format because there’s a bit more cohesion.”

“Your Planet,” the song that comes closest to being a title track for the new album, was inspired by Macomber’s childhood friend, Josiah, who died of cancer at the age of 21. “I don’t know what to believe about the afterlife,” she says. “But I want to think Josiah gets to keep living and doing something somewhere in some alternate universe. The song “Your Planet” is about trying to call out to him and just be like, ‘Are you there? Are you doing good? I just hope that you know how much I love you.’ It’s pretty sentimental.”

Those who don’t realize I’m a musician can attribute everything I do to a man–if it helps them sleep well at night. Fuck it.

Young Ejecta, both the persona and the format of the band, allows Macomber a newfound creative freedom. She basically wrote herself out of a previous band, the all-female group Christian! Teenage Runaway. “I wrote this song called “Swissex Lover,” she recalls. “I showed it to my girls in the band and they were like, ‘What are we supposed to do with this song?’ Electronic music really spoke to me because I felt like I was immediately embraced in a different way.” Creating Ejecta as a sort of blank slate, Macomber set out to subvert any neat categorization of the band’s music. “I really insisted like, she should be naked all the time so that no one can say, ‘Well, they’re punks, they dress like this.'” 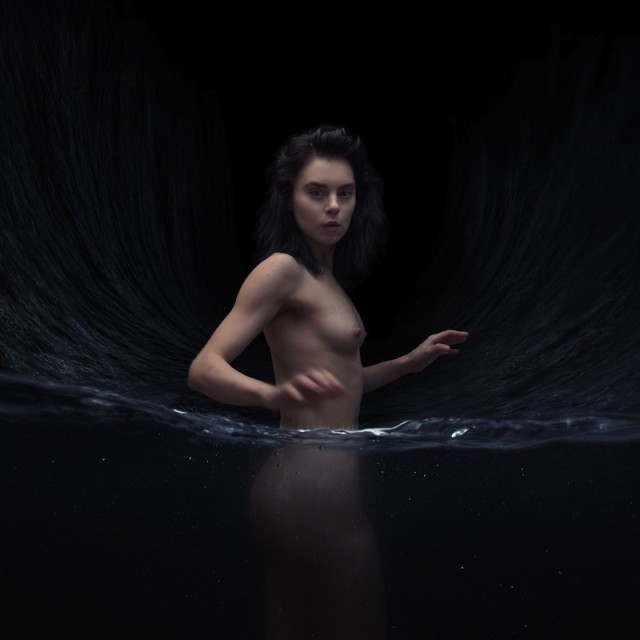 The cover of the ‘The Planet’ by Young Ejecta depicts the band’s singer as a newborn adult. Photo: Force Field PR

The transition from guitar player to singer has been complicated for Macomber. “I was definitely hiding behind a guitar,” she says. “I remember the first show that I was playing without the guitar was [at the] Gorilla vs. Bear festival and I was so nervous. But I enjoy it– it’s terrifying because my voice is all that I have to go on.”

At the same time that she has emerged from behind her instrument, Macomber says that singers are unfairly underappreciated. “Even though I was an instrumentalist for years, the moment I opened my mouth to sing it seemed I lost authorship of the songs,” she says. “Folks tend to assume singers don’t write music. It’s strange, but I figured I’d finally just dive into being a kind of siren. Those who don’t realize I’m a musician can attribute everything I do to a man–if it helps them sleep well at night. Fuck it. Joel and I have a beautiful partnership and we respect each others’ contributions. I don’t think he’d devote this much time and energy into something if I was simply sitting around drinking lemon tea and putting on makeup…but people are dumb so can ya do?”

Young Ejecta’s new mini-album The Planet is out now, streaming on Spotify and some songs are available on Soundcloud. The duo will perform a record release show on February 20 at Baby’s All Right, 146 Broadway, Brooklyn, 8pm, $12.