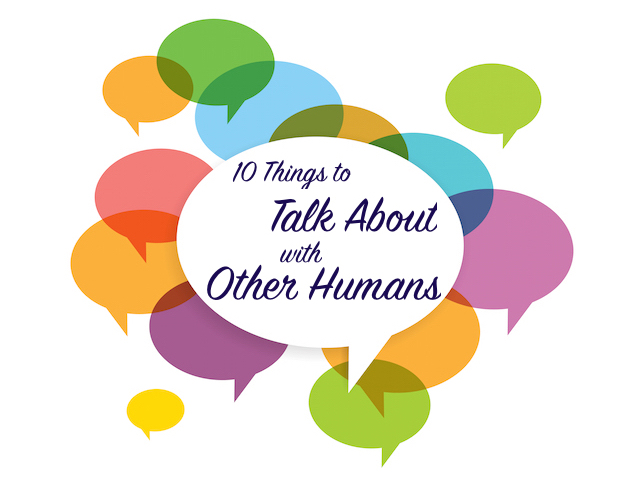 In the wake of storm seclusion and with a major television event nearly upon us, you’ll probably venture out into the world of other humans this weekend after what we’d call the most hibernatory week of winter so far. Here are some things to talk about with them.

1. If you somehow managed to avoid eating piles of garbage food while you were waiting for Juno to not materialize, never fear because the Superbowl returns this weekend in all its battered, fried, smothered and melted glory. The nation spent nearly a week obsessing about #Deflategate, with everyone from Bill Nye to Louis CK weighing in, only to ultimately decide that it wasn’t really worth the ink spilt. Any non-Pats fan can appreciate some good old-fashioned Tom Brady mocking, but Marshawn Lynch’s refusal to play ball with sports reporters is actually more interesting, and let’s be honest, the only things we’ll really care about on Sunday are the commercials and the snacks anyway.

2. Speaking of the epic blizzard that never was, Mayor de Blasio showed that he can be a good sport by gamely staging a dramatic reading of The Onion’s send-up of his pre-”furious hoarfrost” hysteria. Criticism of the ultimately unnecessary decision to shut down the subways has mostly been directed towards Governor Cuomo, who appears to have been on a major power-trip. And you know how it always sounds slightly off when people refer to “AN historic storm”? That’s because they are wrong. But the most shocking thing we learned is that there was STILL a line for cronuts on Tuesday. Guys, we’re officially worried about you.

3. Lindy West, the blogger/feminist/comedy writer and perennial lightning rod for every anonymous misogynist internet troll, had a frank telephone discussion with her meanest hater on This American Life. But when God closes a sexist internet commenter, he opens a Mike Huckabee, who thinks that all you foul-mouthed women of NYC should comport yourselves in a manner that befits ladies.

4. It was only a matter of time before the tsunami of gentrification reached East New York, and New York Magazine neatly summarizes the competing interests that are already playing out between local residents, City Hall and private real estate speculators.

5. American Sniper crushed box office records this month and garnered six Oscar nominations, despite its political divisiveness becoming the main story. A former Iraq vet wrote an insightful essay for Vulture about how America can’t make a defining film of the Iraq War until Americans are collectively capable of seeing Iraqis as human beings. Selma, which was snubbed by the Academy earlier this month, got mired in controversy over the accuracy of its portrayal of LBJ, but Mark Harris at Grantland explained why people just need to chill the eff out. I confess I haven’t seen either film yet, but then again I’m still recovering from being forced to watch The Interview on New Year’s Day–woof.

6. Russian spies in NYC! Trying to recruit female college students and gather intel on destabilizing financial markets! And we aren’t talking about Felicity and her TV husband/real life boyfriend (although Season Three of The Americans debuted this week).

7. On Tuesday, Kings Theater officially reopens in Flatbush/Ditmas Park with a kickoff Diana Ross concert. The New York Times did a deep dive into the venue’s storied past (it was built in 1929, is on National Register of Historic Places, and was the site of Marty Markowitz’s first real date) and its massive $95 million renovation and restoration, and our own David Chiu wrote about what to expect from Kings in terms of programming and impact on the surrounding neighborhood. The theater isn’t aggressively courting the millennial set with an initial lineup of acts that includes Frankie Valli & the Four Seasons, Sarah McLachlan, Gladys Knight, and Widespread Panic, but after being shuttered for nearly 40 years, it might just need to ease into the 21st century gently. Then again, who can predict what the youngs are into these days–Billy Joel was just announced as the headliner at Bonnaroo.

8. As someone who will still be paying back educational loans when there is a Second Avenue subway and nary a Law & Order episode to be found on TV, I hope for everyone’s sake that Obama’s plan to provide free community college tuition to millions of students goes through. In case you missed it, Tom Hanks wrote a very personal op-ed about how his two-year stint at Chabot community college shaped his entire life and career.

9. Based on the scuttlebutt after the Sundance premiere of Going Clear, the  documentary based on Lawrence Wright’s book of the same name does not pull a single punch in its top-to-bottom expose of Scientology as a predatory, abusive cult run by a power-hungry lunatic. It won’t air on HBO until March, but you can read Wright’s book, our interview from a few years back with Janet Reitman (who wrote Inside Scientology: The Story of America’s Most Secretive Religion), or this old New Yorker article detailing Paul Haggis’ dramatic break with the church while you wait.

10. Finally, before you get too worked up about the next “scandal” to hit the Twitterverse, take a look at Slate’s amazing compendium of all the things that raised our collective hackles in 2014. When you realize that you don’t remember what half of these controversies were even about, it might help you keep some of your knee-jerk outrage in check in 2015.