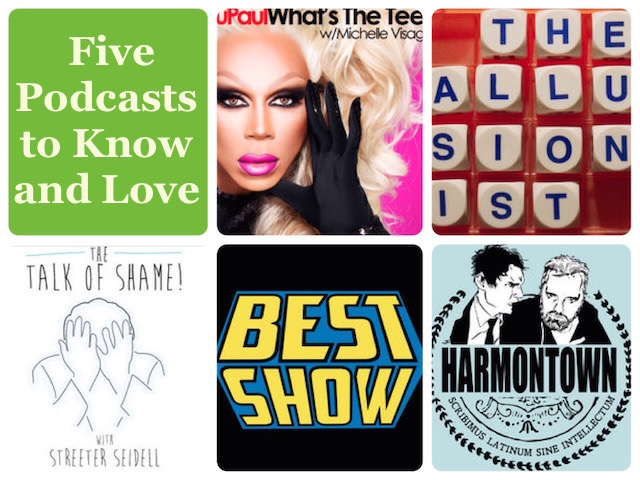 Now that the first season of Serial is over and done with (though who knows if another shoe is going to drop with that story), you may be casting about for something new to listen to on the train, while you’re cleaning or on a car trip. We of course love our Funny Story podcast (which we’ve taken to calling The Sloppy Moth with so much gusto that we may change the name), but sadly, we only produce it on a monthly basis. Here are five other shows that come out a lot more often and have extensive archives, for your listening pleasure. 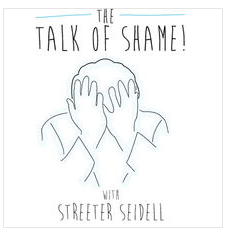 The Talk of Shame
For someone who spends most of their time alone, I still end up embarrassing myself with shocking frequency. So listening to others recount their own mishaps, missteps and blush-inducing misdemeanors is a welcome break from reliving my own. Comedian and writer Streeter Seidell’s podcast The Talk of Shame sits Seidell down with one of his friends so they can tell him (and us) an embarrassing story about themselves for our entertainment. Past guest stories have involved expensive hook-ups, falling through chairs, fainting in front of Hilary Clinton and refusing to acknowledge who actually set off the really loud alarm in the building. Seidell starts the podcast off with a story about himself, and ends it with a British person reading a listener’s embarrassing story. So that’s three people acknowledging their failures in less than 30 minutes. If that doesn’t make you feel better, I don’t know what will. Listeners be warned: if you’re the type of person who hates hearing stories get interrupted by talkative comedians, then this isn’t for you. –Sonia Weiser 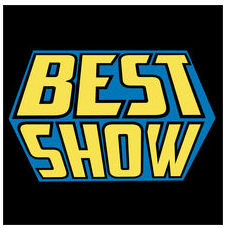 The Best Show
Callers to The Best Show, the weekly freeform radio program-turned-podcast that Tom Scharpling has been writing, producing and hosting since 2000, comment with surprising frequency that the show has gotten them through hard times in their lives. Surprising because Scharpling, or at least the irascible, outsized personality that he puts on for the show, isn’t warm and fuzzy (callers regularly get GOMPed, or hung up on, for offenses ranging from being boring to liking Billy Joel music). Nonetheless, The Best Show has developed a cult of fiercely devoted fans, known as “Friends of Tom,” who religiously block out three hours every Tuesday night for “mirth, music, and mayhem” courtesy of their hero, a former writer for Monk who has also directed music videos for the New Pornographers and Aimee Mann. Scharpling has a lot of friends in the alternative comedy and music world–people like Patton Oswalt, John Hodgeman, Kurt Vile and Julie Klausner are regular guests–and almost every show features one scripted call from Jon Wurster, the drummer from Superchunk, playing one of a variety of characters who reside in the fictional town of Newbridge, N.J.  It’s definitely weird, and it’s probably not for everyone, but since I discovered The Best Show a few years ago when it was still a radio show on WFMU, it made me laugh more than anything else I watch, read or listen to and it also provided an unexpected sense of community when I myself was going through a rough patch. Despite all of Scharpling’s bravado and bluster, the show’s best strength is his amazing ability to zero in on the often mundane, sometimes maddening, minutiae associated with human existence and make it hilarious and completely universal.  The Best Show airs live from 9pm-midnight on Tuesday nights at thebestshow.net and is then available as a podcast on iTunes. –Kate Hooker 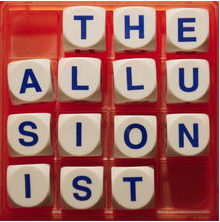 The Allusionist
Fresh off the Radiotopia podcast presses, Helen Zaltzman hosts this new fortnightly program, combining word and phrase etymology with history and charming British humor. Each episode is less than 20 minutes and focuses on one central idea explained by both Zaltzman and a special expert-level guest. So far, the first three episodes have been about puns, bras and variations on the theme of, and the meaning and misuse of “going viral.” Zaltzman is a comedian, writer, and award-winning podcaster who also co-hosts the podcast Answer Me This with Olly Mann. She is the younger sister of Andy Zalztman, another British comedian who co-hosts The Bugle with John Oliver (also worth listening to). —SW 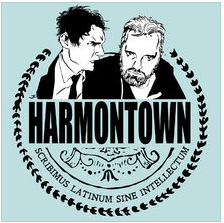 Harmontown
Harmontown is basically a talk show, but that hardly does it justice. Dan Harmon, creator of Community, hosts each week, with Jeff Davis as his “comptroller,” though there are often guest comptrollers, including a show from this fall in which LaVar Burton stepped in the role and was every bit as magical as you would expect. American nerd hero, LaVar Burton. It’s a live show, and there are ton of guests, usually from the comedy world and the conversation ranges from how Teen Wolf is actualy a coming out story, to hipster child-naming naming conventions, to an ongoing obsession with Dungeons and Dragons (there’s a bit in most episodes where they actually play D&D). There amazing thing is how Harmon keeps the thread going and circles back to earlier themes in the conversation, so the whole thing actually feels focused. I’m not doing it justice in this description, and it’s a hard show to fully describe without making it sound unstructured or overly comedy-nerdy. It’s especially worth checking out if you’re about to head out on a roadtrip or plane ride, because there are tons of episodes and each is two hours, so your Harmontown well will not run dry. –Annaliese Griffin 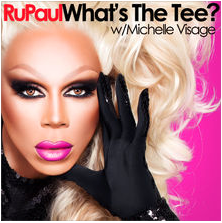 RuPaul: What’s the Tee with Michelle Visage
If you’re a RuPaul’s Drag Race watcher you may be familiar with this podcast already. If not, here’s the quick overview: Every other week RuPaul and Michelle Visage, performer and Drag Race judge, hold an on-air coffee klatch where they talk about the drag world, reality television, plastic surgery, dogs, slut shaming, drag cruises (yes, this is a thing) and pretty much anything and everything else you could imagine. It’s like Joan and Melissa Rivers, crossed with Tom and Ray Magliozzi, but with much, much bigger hair. Does that sound insane? Well, you know how Car Talk is interesting to listen to, even if you don’t care about cars? What’s the Tee has the same appeal, even if you don’t care about drag, Drag Race or gay culture. Why? It’s inherently entertaining listening to people enjoy themselves and Ru and Michelle have the best radio cackles and chemistry since Tom and Ray–they laugh so much and so uproariously that you can’t help but be in a better mood after an episode. And to decode the name for anyone not familiar with drag slang, “what’s the tee” basically means, What’s up girl? What’s the gossip? –AG