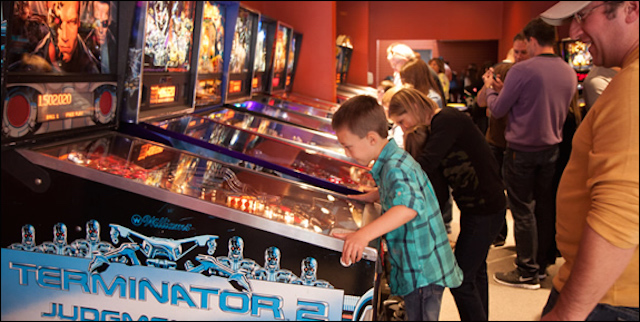 Your kids don’t need to know the difference between a flipper and a bumper to have fun at Modern Pinball. Photo: photographybyjuliana.com

This winter we’ve already been to every museum, playspace, and cafe. The doldrums are starting to hit…and it’s only February. Last weekend I knew I had to start thinking out of the box, and I found a remedy in the unlikely neighborhood of Kip’s Bay.

Modern Pinball was opened in October 2013 by Steve Epstein and Steve Zahler, pinball enthusiasts who wanted to build an arcade and showroom (where all the machines are also for sale). Walking down Third Avenue with my 5-year-old son, I was expecting a sprinkling of tween boys with blooms of acne, unaggressive facial hair and frantic fingers. Instead we found a small bright room packed with a dynamic cross-section of New York. There were kids of all ages and their parents, OKCupid couples on dates, and pros honing their skills on around 30 machines, standing in neat rows. There’s no music; just the bells and whistles of the retro machines and the gasps and groans of the players. One other thing you won’t hear is the sound of pocket change being inserted in the slots. A single admission price gives you unlimited game time in blocks  of one or more hours with the machines. 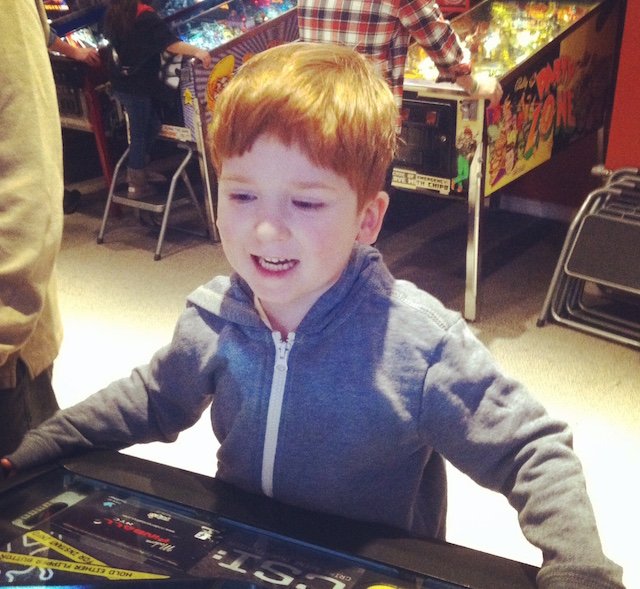 The owners thought of everything from a party room in the back, to step stools for their youngest players. We grabbed one and sidled up to a heavy metal KISS game. “The ball doesn’t get hurt, does it?” my son asked, as the ball whizzed around the glass box. Pinball may have strategy, like hitting targets and trapping tricks, but all you need to know is how to pull the plunger and press the buttons to play. In two seconds he was already in deep and I got busy on The Twilight Zone. I was never into video games. Childhood birthday parties at Chuck E. Cheese would find me gravitating towards ski-ball, fists full of tickets going towards a collection of cheap friendship bracelets. But here, 15 games later, I was overjoyed when my ball locked and I found myself wrenching around three balls at a time while the machine clanged a congratulations at me. Although pinball definitely has the same addictive element as video games, it’s different. You are physically moving your body while you play and work on hand-eye coordination. Plus, instead of being isolated in a room, it feels like you are more part of a league of players, engaged in the jovial surroundings.

Modern Pinball also rents their space for birthday parties, and interestingly it is also a registered vendor of the New York Department of Education and “hosts classes and camps to learn about physics, arts and science as they relate to pinball,” according to the website. This would be a killer field trip destination for any age!

An hour later, I looked up and saw that it was time to leave. When we arrived I wasn’t sure that we would last a full 60 minutes, and now we wished we had sprung for the three-hour package. But it was dinner time, and we were hungry. Walking to Dhaba for some curry and mango lhassi, we talked about all the games we didn’t get a chance to try…Avatar, Transformers, Walking Dead, Metallica. Not to worry, there will be time for a bonus round. In fact, we have all winter.