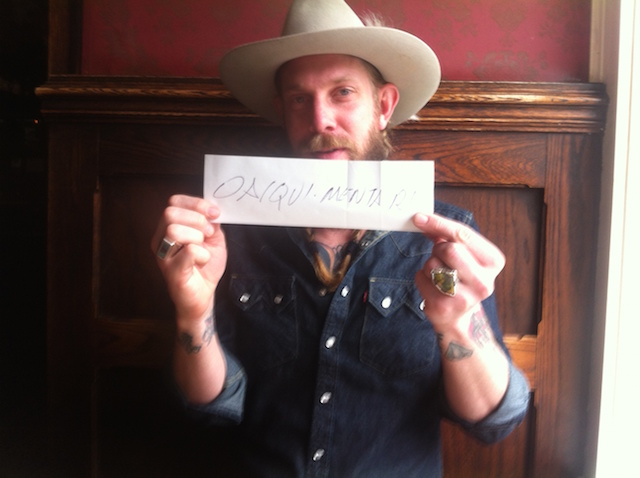 Daiqui-menta-ri is the name of a drink Prime Meats’ bar director Damon Boelte invented in homage to Maria Callas. It’s made with Branca Menta, a liquor inspired by the opera singer, who used to drink Fernet with mint before performances. Photo: Ellen Killoran

There are neighborhood haunts, and then there are bars worth traveling to because the cocktails are just that good. Our Behind the Bar series profiles the bartenders at these destination watering holes. This month we paid a visit to Damon Boelte, the bar director at Prime Meats. It’s best known for its food, but it began as a speakeasy.

Where he goes when he’s not working: Extra Fancy, Attaboy. “And I like old bars, like Fanelli’s in Soho and Old Town in Union Square. But I spend most of my off hours here at Prime Meats. It’s like home to me.”

Best bit of bartender trivia: “The term ‘bar’ is short for barrier. It’s the barrier between all these thirsty hellions and the booze. The bartender is the guardian of the booze.”

Why you’ve never seen a reality competition show with bartenders: “The bartender’s job is to alleviate tension, and those shows are based on creating drama. We’re not competitive with each other the way that chefs are. Our community is really strong, and it’s built on relationships. We’re more than happy to share recipes and techniques with each other. “

Damon Boelte, the bar director at Prime Meats in Carroll Gardens, takes his work very, very seriously–but says making a drink is “the last thing you should worry about as a bartender.” The Oklahoma native, who has a tattoo of the Fernet Branca eagle and hosts a weekly Heritage Radio show called Speakeasy, believes “the job of the bartender is to be the host.” But that doesn’t mean he doesn’t have strong opinions about what does–and doesn’t–belong behind his bar.

“People were coming into this cocktail bar called Prime Meats asking, ‘Don’t you have food?’ And we were like, ‘Nope. We have a shitload of whiskey.’”

Boelte started collecting cocktail books when he was a pre-teen. “I was drawn to the history and the recipes even if I didn’t understand what the ingredients all were. [Cocktail culture] was extremely foreign to me, a kid growing up in the Bible belt, and I didn’t understand it for a long time.” After running a motorcycle shop and working for years as a graphic designer, Boelte finally decided to start bartending, and took a job at a bar in Oklahoma City, where he was quickly promoted to bar manager. But “by the time I started bartending in Oklahoma City, I guess you could say that I was already nearing the end of my tenure there.” Before too long, Damon and his identical twin brother–who remained in the graphic design world–decided it was time for a change of scenery, and moved to New York.

Boelte began the bar program at Prime Meats more than six years ago, next door to its sister restaurant Frankie’s. “When we opened in the tail end of 2008, we opened as a speakeasy. We were bringing people in through the back door. I guess it’s past the statute of limitations so I can say that now. Back then, we barely had a kitchen–pretty much all we could do were cheese and meat plates.” But since they were paying rent while the kitchen was being finished, eventually the team decided at a certain point to just go ahead and open. And that speakeasy period established the space as a cocktail bar, even if some visitors from outside the neighborhood were a little confused. “People were coming into this cocktail bar called Prime Meats asking, ‘Don’t you have food?’ And we were like, ‘Nope. We have a shitload of whiskey.’”

From the start, Boelte carefully cultivated the classic, whiskey-forward bar menu that Prime Meats is now known for. For instance, he has permanently 86’d cranberry juice from his bar. “And I love cranberry juice,” he said. But he didn’t want people coming in and ordering Cosmos and vodka and cranberry drinks. To that end, he initially resisted stocking the bar with any vodka, but eventually came around and started carrying Tito’s–because Tito is a personal friend. “It wouldn’t be fulfilling to me to work hard on getting this place open, to work hard on a menu, and have the kind of vibe that I want to put out and have people come in and go straight to the go-to’s,” Boelte said. “My idea about bars is that you should have something for everyone, but you don’t necessarily have to have everything for everyone.”

Boelte is a true cocktail classicist, and is inspired by how many different cocktails you can create from three or four basic modular formats. “Like Phil Ward says, you just want to play Mister Potato head with them.” Boelte illustrated by explaining that a Negroni–which is equal parts gin, Campari and vermouth–becomes a Boulevardier if you swap out the gin for rye. Similarly, if you replace just the rye in a Manhattan with cognac, you now have a Harvard cocktail. “It’s really easy to stay within those guidelines, but manipulate them.”

For all of Boelte’s appreciation of classic spirits and cocktail history, he also recognizes that there is more history to be made. “It’s easy to forget that this culinary art of creating cocktails is extremely new. The cocktail itself is 200 years old,” Boetle said. “So reading these these end-of-the-year roundups in magazines like ‘Trends We Want To See Die,’ you want to say, ‘Wait a minute! That hasn’t been around for very long, and it’s actually kind of cool.’ What’s wrong with drinking out of Mason jars?”

On the next page, Damon shares his variation on the classic Mule»