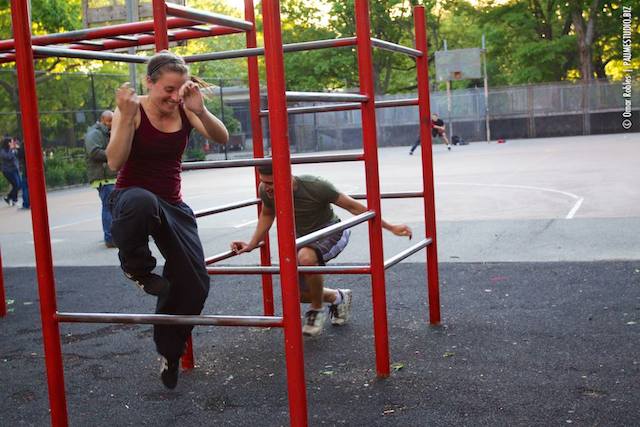 My fingers were so frozen from the cold the night I decided to try a parkour class that I feared they might break off when I opened the door to Cornerstone Community Center in the East Village. The interior, filled with a diverse group of children, doing all sorts of after-school activities, instantly warmed me up  though. Their energetic spirits were the perfect intro to what was going on in the back where, every Thursday evening, The Movement Creative meets to practice parkour, a workout based in play.

Parkour is a discipline of movement and self-improvement that teaches how to overcome any obstacle both efficiently and creatively–think getting from point A to point B, both physically and mentally. It started in France in the 1980s as part of military obstacle-course training and is composed of simple, natural, human movements that can be amplified and combined in order to create increasingly complex patterns. These skills include your basic playground moves: running, jumping, climbing, crawling, balancing, rolling, swinging, vaulting and catching.

One of the most surprising things to me was not only how casually fun, yet highly disciplined and focused, the environment was, but also how many women were there.

Two of the three founders of The Movement Creative are women, and I instantly felt at ease and free to jump over wooden blocks and tables with gusto. I also felt comfortable because as much as some of the moves look dangerous, the practice takes care to make sure that safety for everyone involved always comes first.

It’s one of those things that anyone can try out, and it’s also really fun and feels challenging and exciting to do, especially if you get bored with the gym, like I do.

Known as practitioners, or traceurs, the parkour community in New York includes NYParkour, which holds classes and is a great site for more parkour information or to find other practitioners; and Brooklyn Zoo, which is a parkour gym in East Williamburg in addition to The Movement Creative. There are also classes at some gyms and other groups that practice and hold classes in various spots around the city. The Movement Creative caught my attention because it gathers outdoors on Tuesdays for a $10 donation class (good for my budget, as many classes start at around $20). It also holds indoor classes on Thursdays and classes on Saturdays for kids.

Parkour really is a community as much as a workout. If you see someone doing something that looks to be anything like parkour, chances are you can stop them and ask where they practice and they’ll fill you in. You can spot traceurs everywhere, including McCarren Park and Fort Greene Park, turning the city into their playground.

The three co-founders at The Movement Creative are Jesse Danger, Caitlin Pontrella and Nikkie Zanevsky. They split up the adult class I attended into two groups: beginners and advanced. Zanevsky led the beginners through an obstacle course. About 20 students showed up for the class I took, and a little less than half the class stayed to practice independently at the open gym that followed. Zanevsky told me that when the weather is nice they draw crowds of up to 50 who show up to practice outdoors.

After the class, I realized parkour can infuse your day, if you let it. You can vault over trash cans, leap your way to the bathroom, bend low under broom sticks, roll over sofas and skip around tables on your way to the kitchen. You can walk on curbs to practice your balance on the way to the subway. You can stand on one leg while waiting on line for your morning coffee. If you’re more into the badass aspects of parkour, Brooklyn Zoo is hosting an American Ninja Warrior training the weekend of Feb. 28, so you can glean tips from the pros, then compete on an obstacle course akin to the ones on this reality show.

Most practitioners, though, seem as taken with how parkour changes their relationship to the city, as with the workout itself–or any ninja-like attributes you might develop while practicing.

A filmmaker and traceur who goes by JR watched the class from the sidelines, waiting for open gym to start. He’s been practicing for so many years that he’s forgotten how long.

“When starting in parkour, you don’t know what you’re starting off with,” he said. “Parkour in general is a huge family. I have friends in Pakistan, Italy, Spain. It’s more of a worldwide expression of movement. It’s a different level of mindset. It’s about getting over obstacles, physically and mentally.”