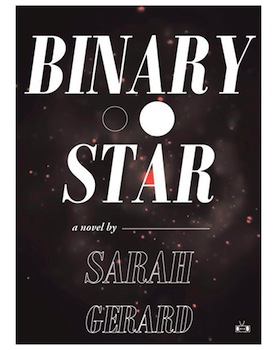 In astronomy, a binary star is a star system in which two stars orbit around their common center of mass. In Sarah Gerard’s universe, Binary Star is a narrative about two imperfect lovers tasked with finding themselves during a cross-country road trip. Our narrator is an anorexic college student and her boyfriend is an alcoholic who’s never had to hold down a job; together, they spiral around their troubles, remaining in each other’s orbit despite their problematic relationship. They come upon literature about “veganarchism” and animal liberation, a cause that gives them focus, but not enough to distract them from their private pains.

The author, a Brooklyn resident, skillfully pulls off the extraterrestrial metaphors throughout. The narrator is fixated on her own weight and uses her education in astronomy to illustrate it, for example referring to herself at times as a white dwarf and describing its properties before connecting them to the state of her own life. In this way, Gerard captures both the diligence and the desperation of an eating disorder without reverting to cliché or feeling unrealistic.

One of the most striking things about Gerard’s novel is the narration itself. The lyrical, evocative prose burns white-hot. It’s fast-paced and seems to ramp up as we go further and further into our protagonist’s life, mirroring her unsettled energy and fully inserting us into her mind. Binary Star is a short novel, but don’t dismiss it as too quick of a read: look as it as a preview to what we can expect from this rising local author.

Sarah Gerard will be at the Franklin Park Reading Series on March 9 alongside Lev Grossman, Jim Ruland, James Hannaham, and Michele Filgate.