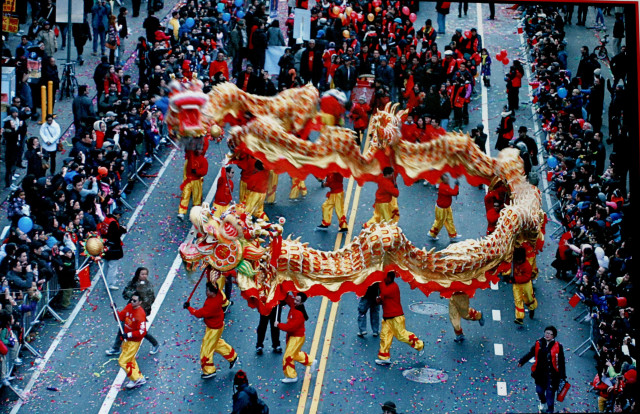 It’s Academy Awards time again, and it’s still ridiculously cold out, so it’s only fitting that there are lots of film-centric activities going on around town this week. Tonight, New York Magazine film critic, editor in chief of RogerEbert.com, and Wes Anderson expert Matt Zoller Seitz is at BookCourt discussing his one-volume supplement to 2013’s Wes Anderson Collection, which focuses exclusively on the Best Picture-nominated Grand Budapest Hotel. If you’re up to hopping the East River, head to Brookfield Place this Thursday at 8pm for Silent Films/Live Music: New Sounds Live, a special event featuring a slate of silent films created by artist Man Ray and scored with original music by SQÜRL, the psychedelic music project that has morphed legendary director Jim Jarmusch into a rock star. BAM’s month-long John Carpenter retrospective continues, meaning you can catch a very young Kurt Russell on the big screen in both Escape from New York and Escape from L.A. on Saturday. Finally, if you need to unwind after Sunday’s main event, everyone’s favorite morning news anchor, Pat Kiernan, is hosting his second annual Red Carpet Trivia Night at The Bell House on Tuesday night.

We realize that there is more to life than movies, so we’ve rounded up activities for the week that run the entire gamut–check ’em out below:

Thursday, Feb. 19: Thursday is the first day of the Lunar Chinese New Year, and even though there is some debate this time around as to whether we are ringing in the Year of the Goat or the Year of the Sheep, I think we can all agree that dumplings, lion dances, costumes, and fireworks are in order. Get a healthy dose of all of these at the annual Firecracker Ceremony and Cultural Festival in Chinatown, which starts at 11am in the park on Grand Street between Chrystie and Forsyth. Half a million firecrackers and rockets will be set off at noon, so it’s the best way to legally and safely kick off the New Year with a bang or 500,000. If you can’t steal away during your lunch break, you can always go to the Lunar New Year Parade & Festival on Sunday at 1pm. Or you can avoid the city altogether and enjoy a celebratory dinner at one of the excellent Chinese restaurants in Brooklyn that we wrote about earlier this week; Windsor Terrace newcomer East Wind Snack Shop is planning a party on Saturday and 2 Duck Goose in Gowanus, which I reviewed last year, has a special Chinese New Year menu running through Friday.–K.H. 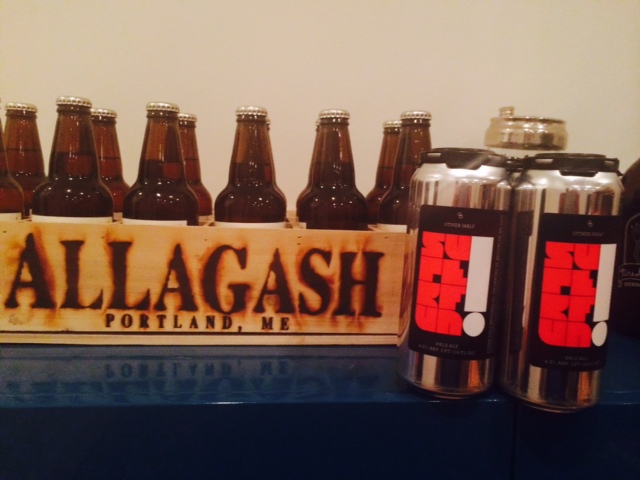 Some of the nation’s best craft breweries, including Allagash and Brooklyn’s own Other Half, are participating in NYC Beer Week, which starts Friday. Photo by Kate Hooker

Friday, Feb. 20: In the aftermath of that widely-loathed Budweiser Superbowl ad spot making fun of craft beer (even though Bud has been feverishly buying up craft breweries) and consumers who are pretentious enough to expect their beer to taste good, the Seventh Annual New York City Beer Week seems especially well-timed. Sponsored by the New York State Brewers Association and the NYC Brewer’s Guild, whose mission– to “advance New York City’s brewing industry and thereby lessen human misery”– is one we can all get behind, the ten-day-long celebration of microbrewing starts today with Opening Tap, an event during which rare or unique kegs will be tapped at participating bars and restaurants citywide starting at 7pm. The list of the hard-to-find beers available and the places to find them is on the website, as are details about Beer Week’s other events, which include Brewers’ Choice, an upscale beer and food fiesta on Feb. 24 in Clinton Hill, and a closing brunch with a brass band at Brooklyn Bowl on March 1.–K.H.

Saturday, Feb. 21: This weekend marks the opening of the new Kehinde Wiley exhibit at the Brooklyn Museum, and I think it’s safe to say that it’s going to be a pretty big deal. Wiley’s work evokes the Old Masters’ portraits of wealthy, powerful Europeans, and typically depicts contemporary black men (and sometimes women) that the artist famously “casts” off the street, posing majestically before ornate, brightly patterned backdrops. These images of empowerment are a welcome sight, particularly in light of the recent spate of dismal stories about people of color, especially young black men, being marginalized and terrorized by institutional powers that be. Wiley is definitely having a moment– he received a Medal of Arts from the U.S. State Department in January, had his work featured on the set of Empire, was the subject of a recent New York Times profile, and is now about to kick off his first museum retrospective at the ripe old age of 37. Be one of the first to see what all the buzz is about and experience the new show, which will be here through May. Museum hours are 11am-6pm, but note that this Saturday and next there will be an exclusive viewing hour for museum members only from 11am-noon.–K.H.

Sunday, Feb. 22: As Billy Crystal would croon if he were hosting yet again this year, “It’s a wonderful night for Oscar! Oscar, Oscar, who will win?”  No one wants to miss out on any of the glitz, glamour, triumphant wins, painful snubs, and emotional thanking of God, families, and agents, so if you’re one of those pragmatic “screw you, Time Warner” people who decided that a Netflix instant account and Mom’s HBO GO password was all you needed, you can relax– Brooklyn’s got you covered. Building on Bond, a low-key Boerum Hill hangout with a cozy industrial-chic design, will be screening the festivities and, as always, will have tasty snacks on hand and a full bar with some quality beers on tap. Meanwhile Videology, Williamsburg’s video rental store/bar mash-up, will be showing the 87th Academy Awards in their intimate screening room, so show up early to get a seat! While you’re there, you can peruse their comprehensive list of DVD titles available to take home with you. Finally, if the SNL 40th anniversary special renewed your excitement for the longest running comedy show in television history, then check out SNL Writers Unscripted: The Oscar Show at Union Hall. There will be trivia, prizes, and five current Saturday Night Live writers performing improvised comedy during the Oscars broadcast, which is sure to be funnier than your roommate’s Doogie Howser cracks and Joan Rivers-style fashion put-downs. Tickets are $8 if you buy them online. — A.J. 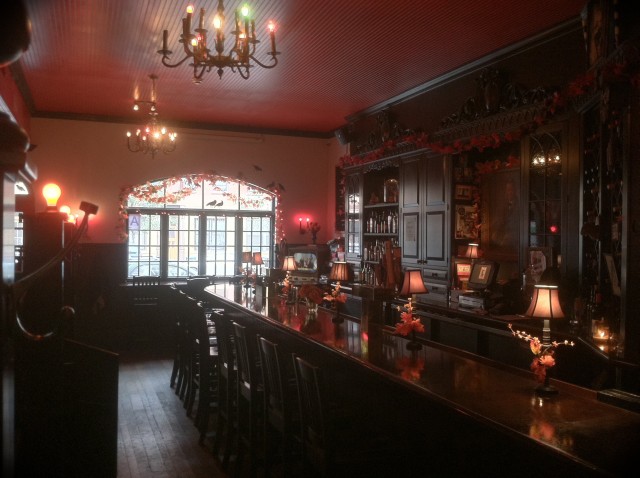 Monday, Feb. 23: I studied abroad in England when I was in college, and though it never got anywhere near as cold when I was there as it has been around these parts over the last few weeks, I spent a lot of time rain-soaked and shivering in seemingly endless greyness, wishing for a proper mac and wellies. It was then that I developed an appreciation for the British tradition of hearty, warming meals featuring meat, potatoes, and copious amounts of alcohol, like the one being served at Greenpoint’s Black Rabbit pub this Monday night. Kicking off a series of seasonal pop-ups, the Monday Supper will be a five-course English style roast with an American twist served up by Chef Lincoln Clevenson of Luksus and Spruce. There are two seatings at 7 and 9pm, and tickets are available here for $40 each with a $15 optional beer pairing.–K.H. 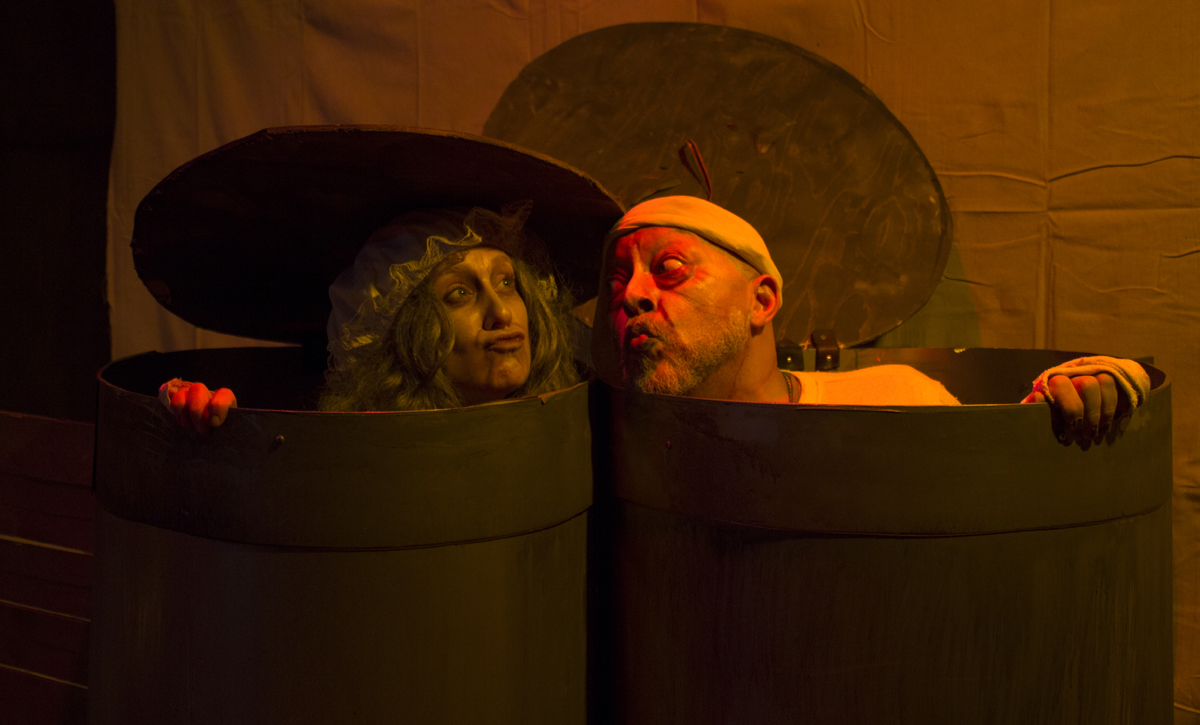 Tuesday, Feb. 24: A bleak weeknight in February seems like the perfect time to give your brain a workout and indulge in some dark, avant-garde Theatre of the Absurd, and as luck would have it, the Brooklyn Stage Company is performing Samuel Beckett’s Endgame at the venerated Sunny’s Bar in Red Hook this Tuesday at 8pm. Evidently, the same theater company staged Beckett’s better-known play, Waiting for Godot, on a Red Hook barge in 1994, and the bar’s beloved proprietor, Sunny Balzano himself, played Lucky in a performance that has become the stuff of local legend. Twenty-one years later, this production of Endgame, directed by Tom Keener and featuring two characters who live in trash cans, sounds like it might be equally memorable, at least according to this writeup in the Red Hook Star Revue. The show starts at 8, tickets are $18, and you should call 718-344-1824 to make reservations beforehand. All that puzzling over postmodern minimalism and tragicomedy requires fuel, so it is fortunate that you can get a delicious pre-theater dinner within just a few blocks at The Good Fork, Hometown BBQ or Fort Defiance.–K.H.

Wednesday, Feb. 25: Oh man, remember those halcyon days when if you wanted to see Kurt Braunohler do stand up all you had to do was walk or R train over to Littlefield for Hot Tub on Monday nights? Since he moved to LA a few years back, we Brooklynites have been deprived of his smart/kinda weird but hilarious brand of humor, which is why everyone should go get a fix this Wednesday when Kurt is back at the Bell House for his Roustabout Tour, supporting his new webseries of the same name on Comedy Central. The series follows Kurt on a week-long jet-ski odyssey to raise money to send goats and chickens to Africa via Heifer International, which sounds guaranteed to bring laughs, and we already know his stand up is amazing, so what are you waiting for? Tickets are $15 and the show starts at 8.–K.H.

Tips this week by Kate Hooker and Alexander Jordan.