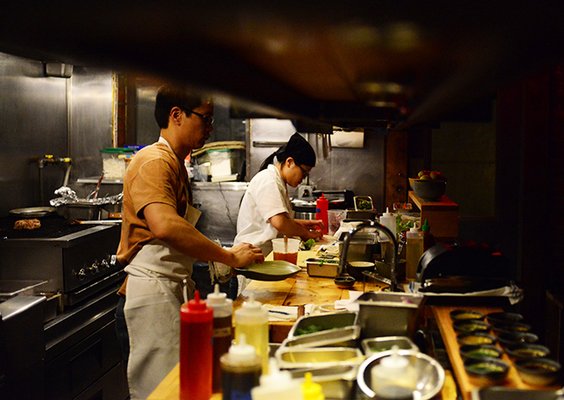 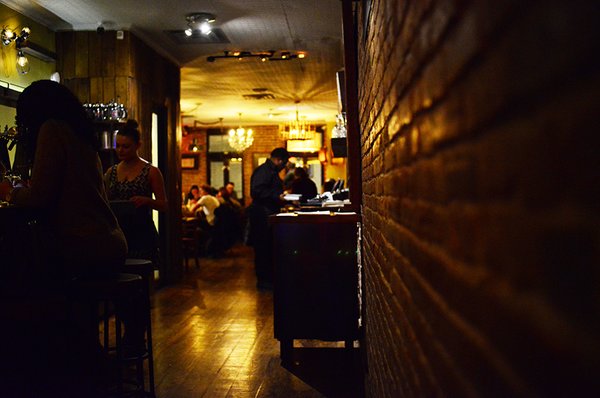 When artist and designer Miro Gal turned his talents to the restaurant business he was originally thinking about a small bahn mi and beer shop–the kind of authentic roadside spot found throughout Vietnam. Gal, who was born in Jerusalem, lived in Europe and now calls Ditmas Park home, has never been to Vietnam himself but is taken with the country’s light and flavorful cuisine. A scriptwriter, interior designer and professor at the School of Visual Arts, Gal’s business partner was a neighbor, Jed Freedlander, whose Ditmas Park home Gal recently designed. When the pair put up a Craigslist ad seeking chefs for their upcoming Vietnamese venture, they hit upon an unexpected goldmine: Edward and Lien Lin, both veterans of the kitchen at San Francisco’s The Slanted Door–one of the most acclaimed Vietnamese eateries in the country (another Slanted Door vet recently opened Bushwick’s excellent Falansai). They had just come east for another short-term project, and “when Ed and Lien showed up, they had so much capacity that we realized just a bahn mi place wasn’t appropriate,” recalls Gal.

The result of their surprise collaboration is Bricolage, which opened earlier this month in the Park Slope space formally home to Brooklyn Fish Camp. Gal designed the distressed-wood-heavy interior while Lien Lin, a northern Vietnam native and UC-Berkeley grad with degrees in microbiology and computer science on top of ample cooking skills, oversees the kitchen along with Edward Lin, who cooked at several high-end French restaurants in San Francisco before Slanted Door. “Bricolage” refers to an artistic design that fuses various sources and mediums, but here the name refers to the diverse assembly of people, materials and ingredients, and the food reflects the Lins’ unique takes on traditional Vietnamese fare, with influences from China, French cooking and New American cuisine.

Inside the open kitchen at Bricolage (Photo: Bricolage)

The menu, which will change seasonally, is small for now, and includes “unshaking beef”–a deconstructed take on the Slanted Door’s signature “shaking beef” dish, which is a salad of watercress and flank steak. Here, the bloody sliced steak comes served on the side of the greens with a supremely tangy lime-pepper sauce for dipping or drizzling, and a few juicy little caramelized pearl onions on the side. The kitchen is slowly adding new dishes to the menu; the standout when I popped in last week was the just-added cha ca la vong–a northern Vietnamese speciality of grilled tilefish seasoned with turmeric, dill and scallions, served over a bed of rice vermicelli and arugula. The simple preparation lets the sweet and delicate flavor of the tilefish (known as poor man’s lobster) shine through, with just a hint of spice and tang.

Simpler small plates include a crispy green papaya salad where anchovy vinaigrette provides the pungent punch usually brought by fish sauce, as well as a seafood crepe and the requisite Brooklyn beet salad (with kale, red onions, grapefruit and sesame candied walnuts). They even manage to get creative with our borough’s most ubiquitous mass-produced ingredient–Sriracha. Here the popular chili sauce is mixed in with melted butter, resulting in a rich and spicy dipping sauce for crispy fried chicken wings that feature just a hint of five-spice flavor. Every dish I sampled here was extremely tasty. My only (small) complaint is that the prices seem a bit high for what are essentially refined takes on street food–$23 to $26 for the meat-based entrees and $9 to $14 for small plates–making this a bit more of a fancy date-night spot than the casual neighborhood hang that the comfy, laid-back setting might suggest.

The long bar in front is a nice spot for quick drinks though, and there’s a nice selection of local beers including the IPA from Carroll Garden’s new Other Half Brewery and the excellent Gangster Duck Red from NYC’s new Radiant Pig Beer. Cocktails include a “Goodnight Vietnam” with rum, coconut, condensed milk and coffee. Brunch and lunch are on the way soon.