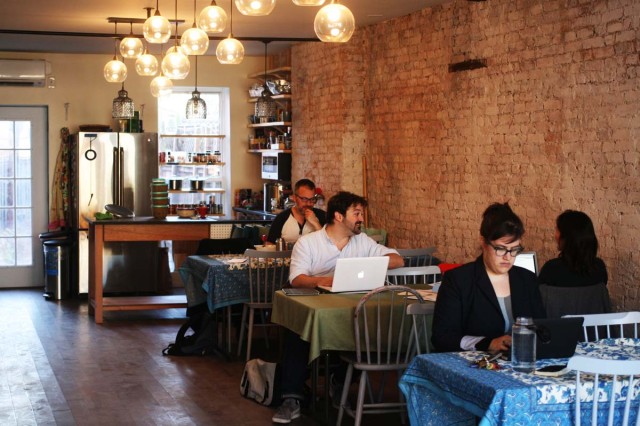 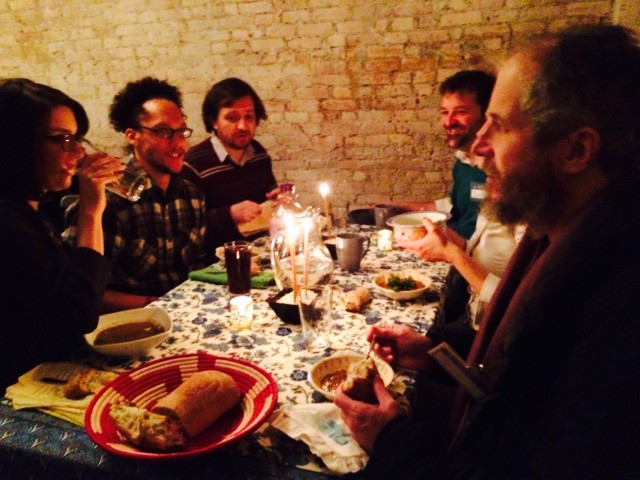 If I’m being really honest, I’m not a person who has spent significant time wondering whether I need more organized religion in my life. It factored pretty minimally into my upbringing and, although my Bible ignorance was an issue when I had to study Milton in college, I never felt like I was missing much. Obviously, I can respect religion to the extent that it provides comfort and ethical guidance—not justification for close-mindedness, judgment and the Fox News politics I happen to abhor—but I’ll confess that I might sometimes be a little cynical about how that often shakes out based on my limited exposure to religion as an adult. At any rate, I was thinking a lot about my beef with organized religion on a recent arctic Monday night, as I trudged over the Gowanus to attend Dinner Church at St. Lydia’s, a nontraditional church/co-working space that recently set up shop on Bond Street.

I could tell right away that St. Lydia’s was not going to jibe with any preconceived ideas I had about church and the people who regularly attend it. The space has that trendy, studied-DIY look—all exposed brick, chalkboard paint and industrial light fixtures–that is more reminiscent of my Pinterest feed than the musty, dark wood-paneled church I sat in a few times a year as a kid wearing impossibly itchy tights. Pastor Emily Scott, in her early 30s and sporting a stylish Claire Underwood-esque haircut, greeted me at the door in skinny jeans and boots, handed me a name tag and introduced me to the 15 or so congregants who had already gathered and were busy preparing our Goop-friendly meal of quinoa with vegetables and goat cheese in the open kitchen area.

The group was young and very friendly, and I felt like I’d already made a few quick friends when everyone gathered in a solemn circle to sing and participate in the Eucharist a few minutes later. I was worried I’d feel awkward when things got “religious,” but no one seemed to notice when I politely declined to take the bread that was offered as the body of Christ. Once seated at the communal tables, the conversation was loose and totally familiar: We complained about various subway lines and traded funny roommate stories until the sermon began. The passage of scripture we read was about Jesus enlisting his disciples to spread his teachings, which Scott compared to the methods employed by the Obama campaign in 2008. Language about casting out demons was interpreted, to my relief, to refer to the demons of racism and homophobia. We were all encouraged to contribute our thoughts on the passage, which led to an open, thoughtful discussion. We worked as a team to clean up after dinner, and then gathered for the passing of the collection plate and the conclusion of the service. One congregant plugged an upcoming LGBTQ event in North Brooklyn, and everyone discussed plans to join an affordable housing march in East New York the following week. I headed home more hopeful about the impact of organized religion on modern society than I ever had been, and full of that warmth that results from feeling like part of a group, even if only temporarily.

When I met with Scott, who studied at Yale Divinity School and was ordained by the Evangelical Lutheran Church in America, a week later, she explained that St. Lydia’s is deliberately structured to function as a grassroots community instead of as an institution or formal organization, which is a characteristic it shares with other modern religious groups in Brooklyn, like Bushwick Abbey and Reverend Vince’s Love Choir, that seem designed to appeal to young, city-dwelling worshippers. Scott established St. Lydia’s as a Dinner Church specifically to help create the open, friendly vibe I had picked up on during my visit.

Although it is not an active tradition nowadays, the notion of worshippers making and eating a sacred meal together has its roots in the first three centuries of Christianity, and Scott decided to bring it back, she said, “as a response to the cultural context in New York—New Yorkers love food but it is pretty rare to have enough space to host people in your own home and it’s a city where it’s easy to feel isolated, especially if you are new.” The goal, according to Scott,  is to create a community around food and to be very intentional about introducing people to one another. Accordingly, she isn’t as interested in the food itself as she is in what the food does, which is to provide both a social nexus and opportunities to share in the tasks of preparing, setting up and cleaning up after the meal.

Scott is also ambitious about the role that she hopes that St Lydia’s will play in its rapidly-changing neighborhood. Although the church operated out of the nearby Brooklyn Zen Center for two years before it found its own home six months ago, the move has signaled a real shift in terms of action and outreach. “Now that we have our own space, we want to become real stakeholders in the neighborhood,” Scott explains, and that means meeting different people, connecting with different congregations in the area, and getting involved in organizing and advocacy. Among the most pressing issues for St. Lydia’s is the one that’s on every Brooklynite’s mind: affordable housing/gentrification.

“I see it as our job as a church to amplify the voices in a neighborhood that might not be as loud and powerful as others, and to build relationships with those people,” Scott says. “We value difference and diversity and want to help lift up those not be favored by systems of power and we also want to empower residents to have a voice about their neighborhoods.”

To that end, St. Lydia’s has been working closely with faith-based and secular grassroots organizations like Faith In New York and Families United for Racial and Economic Equality to develop strategies for leaning on politicians and raising awareness. Scott is also planning a spring lecture series on the cultural history of Gowanus and issues of race, and wants to address homelessness and problems within the criminal justice system in the near future.

These ideas and others are still evolving, because until very recently the church’s main focus has been physically building out the space and getting to know the neighborhood. Scott intentionally chose the storefront unit so that people walking by would be able to see in from the street and pop in if they wanted to. She enlisted Sheryl Jordan, a NYC-based architect who specializes in high-end microlofts, to help with the clean, hipster-friendly design. With the renovation phase nearly complete, Scott is now thinking about other ways that the church could be used to serve the community during off-hours, including as an event space for weddings or rehearsal dinners.

It already functions as a co-working space for freelancers looking for a clean, quiet, well-lit space to share ideas and get work done from 8am–6pm on weekdays.  At $160-220 a month for a full-time membership, which includes free coffee every day and lunch on Wednesdays, it’s a really good deal. At the moment, the people who co-work at the church are mostly congregants, but there is no overtly religious component to it, and Scott is hoping to expand membership through initiatives like “Get It Done Tuesday” sessions, which cost only $10 and are designed, through things like yoga, meditation, and workshopping breaks, to get you unstuck and refocused on the task at hand.

If you are searching for religion but have been turned off by the church at some point, you might find answers at St. Lydia’s. It provides, as Scott explains, “an experience of faith relying on deep inquiry, whether intellectual, academic, spiritual, where you don’t have to check your brain at the door.” It is also actively committed to promoting social justice and racial equality, and openly, strongly affirms GBLT individuals. Finally, it is an open-minded, warm and welcoming community that wants to be a positive force within its own neighborhood, which is something from which we all stand to benefit, regardless of religious identity.

Dinner Church at St. Lydia’s takes place every Sunday and Monday night, starting between 6:30 and 7pm. The co-working space is open on weekdays from 8am-6pm.