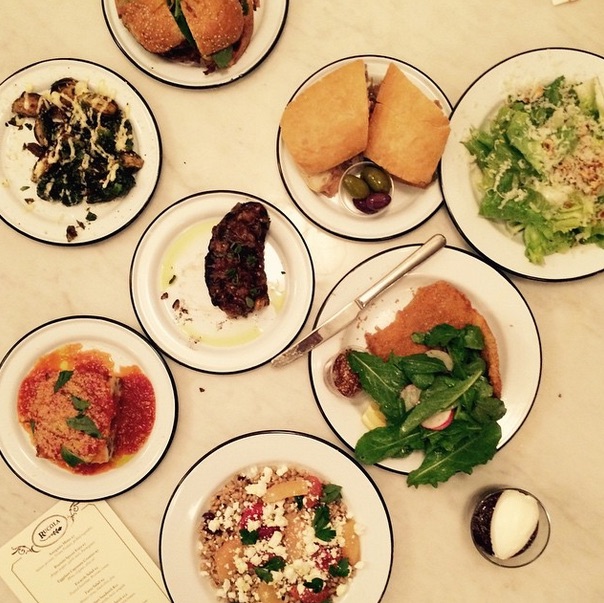 After years of cultivating a reputation for all things small-batch and handcrafted, Brooklyn seems to be stretching its oversize wings this past year, with a bevy of giant new eating, drinking and entertaining spots like Arrogant Swine, Royal Palms Shuffleboard Club and Berg’n. That last one in particular has managed to squeeze everything we’re fond of in Brooklyn–craft beer, thin-crust pizza, overpriced antiques, gimmicky food trends–under one roof. And why not? Considering we have spent this winter in a never-ending world of slushy sidewalks, who wants to trek to three different locations to get your daily hibiscus donut, seasonal pale ale, and flat white coffee?

Berg’n is no longer the only spot to offer all of Brooklyn’s obsessions in one room though. There is also Threes Brewing, a 5,000-square-foot brewery, bar, event space, coffee shop and restaurant that opened recently in Gowanus. 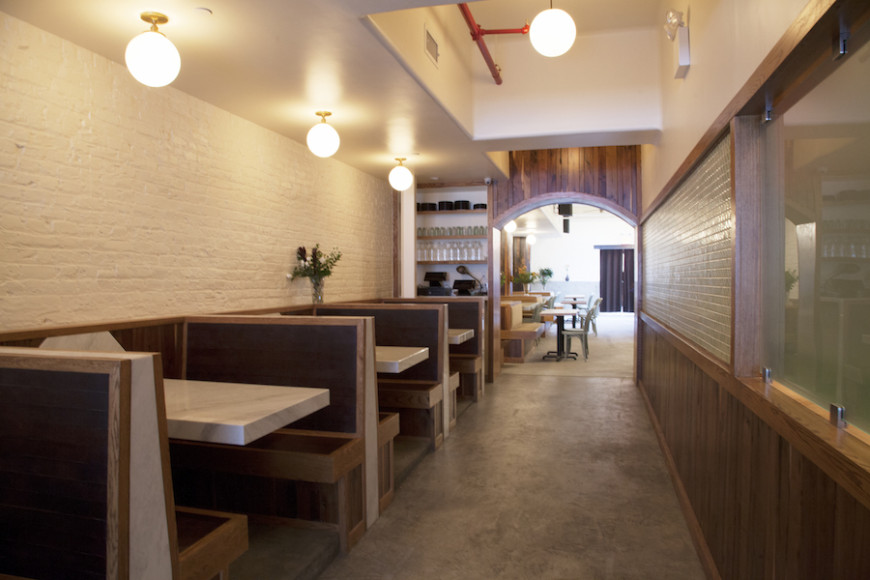 Despite its grand scope, Threes Brewing manages to feel relatively intimate. The set-off coffee shop serving Ninth Street Espresso is on an elevated perch up in the front, a nice little space to post up and establish your coffice for the day. It also has a helpful street-facing to-go window for neighborhood regulars. Meanwhile, a row of sit-down booths lead back towards the large bar in the rear. The focus there is, not surprisingly, on the beer, and for a new brewery these guys are really churning it out, with 12 of their own house-brewed beers already available, from the warm and chocolate-y Voluntary Exile baltic porter to the hoppy, 9.4% ABV Superf*ckingyawn.

The high-tech tap system serves at three different temperatures in order to best match each brew, and of course the appropriate glasses are on hand for every style. Considering how serious of a beer nerd palace this is, they get bonus points for offering group-friendly pitchers, starting at just $18 for their cracked wheat Table Beer. I also like that in addition to their own beers they dedicate draft space to other local brewers, seeking out the most interesting varieties around, from a chocolate rye ale by Carroll Gardens’ tiny new Folksbier to Brooklyn Brewery’s rare-but-excellent Ridgy-Didge collaboration, an Australian-style saison flavored with Tasmanian pepperberry and lemon myrtle leaves. Boozehounds don’t get shortchanged here either, with a lineup of barrel-aged cocktails on offer, and four taps reserved for wine, plus a selection of hard-to-find bottles on hand.

The food program at Threes is perhaps even more dedicated to diversity. Every two to three weeks they host the staff of a different Brooklyn restaurant, collaborating closely to come up with a limited-run menu to be served here. Since opening in December they’ve already teamed up with Roberta’s, Rucola, The Meat Hook and Mile End, while the folks from Battersby and its sister spot Dover are on site now through March 16.

I was interested to see how an acclaimed high-end restaurant like Battersby would adapt their menu for a beer bar setting, and stopped in last week to try it out. I have to say that the jaded Brooklyn food critic in me quickly rolled my eyes at the same-old New American menu items (kale salad, burrata, short rib sandwich, fried chicken…Sriracha brussels sprouts, again?) But if anything, the menu is an undersell considering how unique the Battersby/Dover kitchen crew gets here. That kale salad manages to impress with extra-crispy fried leaves mixed up with shreds of green papaya and crushed peanuts. Smoked baby back ribs over a bed of baked beans are fall-off-the-bone tender, while even a simple fried broccoli, doused in lemon and topped with ample shaved pecorino that clings lovingly to each floret, is delicious. A thin and juicy merguez sausage comes over a fluffy, fresh-baked pita, with a super-smooth spicy hummus and cucumber-yogurt sauce rounding it out. With no dish topping $15, this is a great chance to sample some of Brooklyn’s best cooking at a reasonable price and in a laid-back setting.

A recent spread from Rucola at Threes Brewing.

There’s also live music on many evenings and beer-centric events like an all-day saison festival coming up on March 21. In a way, this is a more relaxed and grown-up version of Berg’n. Oh, and speaking of grown-ups, yes, babies are allowed, but only until 7pm.

All joking aside, this is a great addition to the booming Gowanus scene, and the always-changing lineup of food and beers makes me want to go back once a week to see what Threes has up their sleeve next.