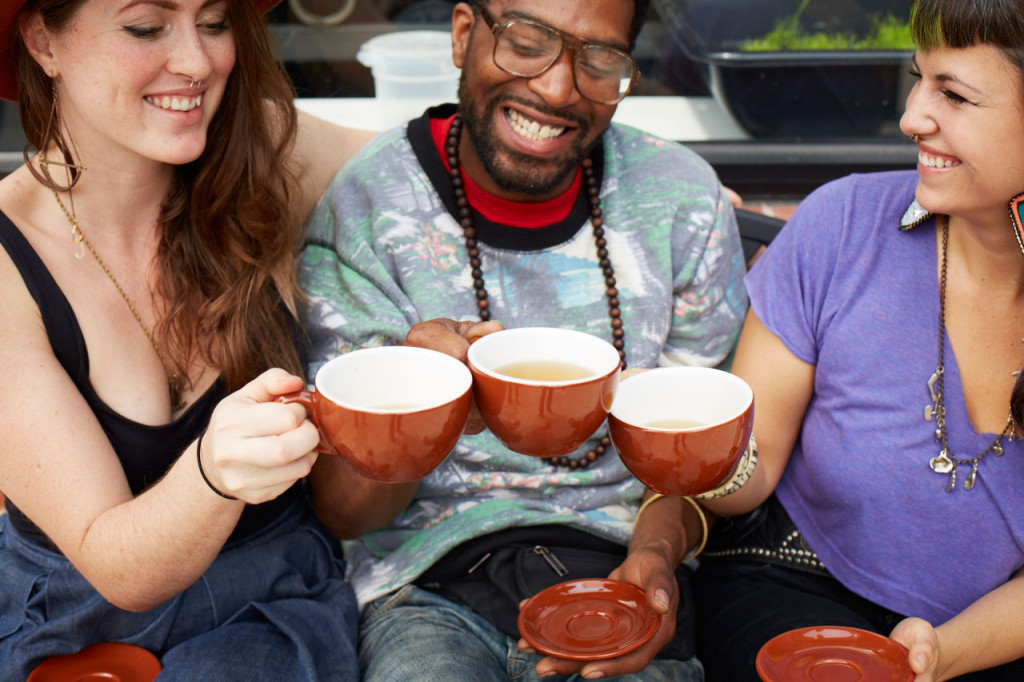 With tea consumption on the rise nationwide, tea making has become a burgeoning new industry in Brooklyn. Photo: Greg Costanzo

Coffee, while ever popular, is actually not as robust an industry as last year’s uproar over $10 licorice lattes would imply—sales have flattened and Americans drink 20% more tea than they did ten years ago. In other words: Your morning cup of Joe now has some steep competition. A small, but growing, group of new Brooklyn tea companies is here to shake up your hot drink routine.

For Charmaine Bee, founder of Gullah Girl Tea, coffee’s closest cousin is a link between her family’s past and her present passion for health and wellness, which started when some of her family members were diagnosed with diabetes.

“[I] wanted to learn how to cure some of the symptoms…as well as learn how to not develop diabetes myself,” says Bee, who started by studying with Karen Rose, of Sacred Vibes Apothecary in Flatbush, to expand her wellness knowledge.

The seed for Gullah Girl Tea was planted when Bee learned that her grandmother used to make teas as a natural cold-and-flu remedy for her kids, including Bee’s mother. This was a surprise to her, having grown up in “a Lipton tea household” herself. Nevertheless, her studies with an herbalist and the family connection were enough to get her going on her own Gullah Girl blends—from Sencha, with coconut and ginger, to RestFULL’s peppermint and lavender notes, able to take the edge off the most stressful day. 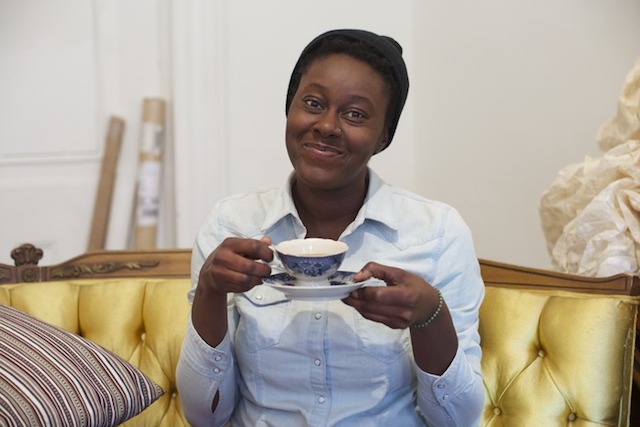 Aside from creating her own tea concoctions, Bee says her favorite part of running her business is the opportunity to connect with customers who also have personal and family connections to tea—and to Gullah heritage. Gullah Girl refers to female descendants of slaves living in the Lowcountry region of Georgia and South Carolina where residents developed a unique culture and language that combined linguistic elements and cultural traditions from different African countries with English words and customs. During one particular phone call, she recalls, a customer “asked me where I was raised in South Carolina, and when I told her, it turned out that she had family there as well. It was such an amazing moment of connecting with another Gullah woman and hearing her story about her connection to that place.”

Tea is becoming an attractive alternate to Brooklynites for reasons other than family ties, too. Other Brooklyn tea fans, like Amy Rothstein, started their companies because they couldn’t find the tea they wanted to drink despite New York City’s passion for local food and abundance of all varieties of produce, cheese, meats, even artisanal mayonnaise. Rothstein, founder of Dona Chai, was surprised that no company offered a locally made chai concentrate. So she made her own.

“[I] wanted a chai latte that was fresh,” she says. “No powdered mixes, and no shelf-stabilized chai. So, I decided that Dona Chai would feature cold pressed ginger juice.”

That freshness makes a huge difference. Chai lattes too often reach cavity-inducing levels of sweetness. Dona Chai is balanced, just sweet enough at first sip, followed by a bracing ginger kick. Loose leaf teas may require an extra minute or two to brew, but the richness of flavor alone is worth it. Bee’s blends are also so much more varied, creative and tastier than anything you can find in the grocery store.

Loose leaf tea also makes a difference in kombucha, which many might think only comes in bottles, but is made even better with loose leaf tea. Kombucha Brooklyn founder Eric Childs started offering loose leaf teas in addition to their regular line of products to show just how delicious it can be. As he told us, “For the majority of kombucha brewing history it was taught that by simply putting together a brew of tea, sugar and culture, kombucha could be made. By using premium loose leaf tea, the final flavor and overall quality of the brew can be directed. Much like wine or beer, we are teaching people to look at the ingredients they are using just as carefully as they are in brewing with them.” 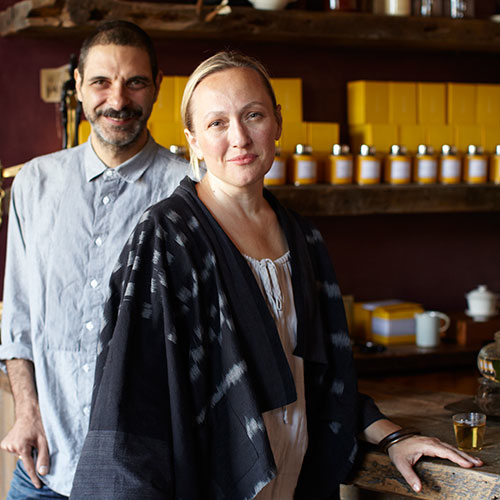 Gullah Girl Tea, Kombucha Brooklyn and Dona Chai sell their teas through various cafes and grocers, but if you’re in the mood to visit a teashop, Bellocq is a perfect fit. Co-founder Heidi Johannsen Stewart and business partner Michael Shannon (pictured here at left in a photo from their blog) were colleagues at Martha Stewart Living Omnimedia with a joint passion for tea. Shannon was a product designer and Johnson an editor and food stylist. They wanted to open the kind of shop with teas they sampled over years of traveling. Unlike many colleagues for whom starting their own business is merely a daydream on the walk to lunch, they made it a reality and opened Bellocq in Greenpoint in 2010.

For Stewart, tea is “an endlessly inspiring journey,” and Bellocq’s store is the perfect solution for the broke armchair traveler, who can’t afford to be transported by plane to the types of exotic places where tea leaves are typically grown, but who is open to a journey in a cup. The teas are sourced from the top producing tea countries in Asia, including China, Taiwan, Japan, India and Sri Lanka, as well as Nepal, Vietnam, Malawi and South Africa. The leaves come from traditional tea growing countries, but are blended in the Greenpoint atelier by the Bellocq team. Sourcing from Asia and blending in Brooklyn means Bellocq customers can get textbook English Breakfast or any of their newer and delicious creations. Stewart’s recent favorites include “the earthy, woodsy No. 22 National Parks Dept., and No.30 Ashram Afternoon, a beautiful infusion of holy basil, mint, rose and cardamom.”

“The world of tea is wonderfully vast and nuanced,” he says. “There is so much for people to learn and experience. It is not unlike wine. Tea can be subtle, but also deeply profound.”

Gullah Girl Teas are available on the company’s website, and at Brooklyn favorites including Crocus Cafe, Saraghina Brooklyn Bakery, Stinky Cheese Brooklyn, Greene Hill Coop and Three Letters Restaurant, among others. A full list is available at: gullahgirltea.com

Dona Chai is working on launching online sales through the website, but until then, their chai concentrate is available at a variety of cafes and stores across New York City. A full list is available at donachai.com.

Kombucha Brooklyn teas are available through its website and at various bars, cafes, and grocers, all listed on its website. They also host classes at 630 Flushing Ave. in Bed-Stuy.

Bellocq is located at 104 West St. in Greenpoint, online at www.bellocq.com and at a variety of stores around New York City and the world, all listed on the website.