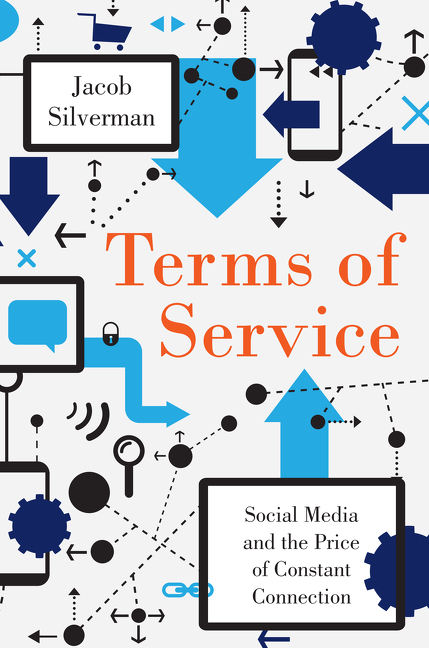 While reading Jacob Silverman’s Terms of Service: Social Media and the Price of Constant Connection and writing this very piece, my phone was constantly interrupting me with notifications for the app Meerkat, which started taking off in my circles last week. The service is something straight out of Super Sad True Love Story–it allows users to broadcast live video, with comments and broadcast notifications posting directly to Twitter–so it seemed apt to observe while reading a tome about the perils of social media. I watched a friend chat about the weather during his taxi ride and saw the founder of another social media platform show off his afternoon snack of Skittles and seltzer. Of course, I was as complicit in these interruptions as the perceived audience of Terms of Service, possible Internet addicts who are likely no longer capable of feeling boredom. (If this sounds like you, try New Tech City’s Bored and Brilliant project).

I found the book to be earnest but captivating at times, full of tidbits about Facebook performing covert behavioral and emotional experiments on us, the psychology of Likes, and how our own sharing is being monetized in a form of digital serfdom. Social media companies have trained us to share constantly, and to believe we are improving ourselves and the world while we’re allowing said companies and their oftentimes cyber libertarian, paternalistic execs to profit from our efforts. Our perpetual sharing has also put us in a place of constant surveillance by three watchers: the companies allowing us to share, the government, and ourselves. In Terms of Service, Silverman details an ecosystem that feeds off of itself in this call-and-response cycle of sharing and the feedback loop of likes.

Although he fessed up to relatively acceptable online behaviors: gaming, watching porn, using Facebook, and buying Twitter followers just because he could, I didn’t get the impression that Silverman uses many social media platforms. Perhaps this puts him in a good position to examine them more objectively, but I had a hard time reading a line that incorrectly identifies how to share photos to Snapchat. (“Into the camera roll it goes,” he writes in the chapter Pics or It Didn’t Happen, “so that later you can perform the ritual triage: Filter or no filter? Tumblr, Instagram, or Snapchat?”) I’m likely not the ideal audience for this book since I’ve probably already read too much on the topic and I already know how much privacy we give up when we opt-in on these services. But if you want more context to make informed decisions about what you share, and where, this is a useful book. Many of the stories that unfold are about the giants: Facebook, Google, and Twitter (although up-and-comers like Snapchat and outliers like app.net are mentioned throughout).

Silverman evaluates the pitfalls and hidden truths of privacy, identity, surveillance, data collection, and the new “sharing” economy throughout many chapters. He ultimately concludes that Silicon Valley is overdue for an ethical turn. “The industry’s increasing reliance on bulk data collection and targeted advertising is at odds with its rhetoric of individual liberty and innovation,” he writes. And internal industry reforms are not sufficient change without redistribution of resources, power, and authority, all of which are skewed in favor of the new tech elite. Silverman writes that further change should come from the government. He argues for a universal basic income paid in part by taxes from the very same corporations that are profiting off us, which would bring fairness to our increasingly technological society. It’s an intriguing idea to propose as a solution to an unequal economy, but this feels like a disparate point among many others that left the book hard to digest as a whole.

The parting advice Silverman leaves us with is how to strip the social networks of their worth. These platforms encourage us to structure our sharing habits through hashtags, linking cross-platform accounts, enabling location services and notifications—all of which capture our data. Instead, Silverman suggests that we obfuscate our identity with false details (add a fake middle name or weird characters to our name, give an incorrect location or occupation), and repost strange content, get experimental, or take inspiration from Weird Twitter. In other words, don’t let your online self be a reflection or distillation of your real self. If you’ve followed his arguments about the sinister motivations of social media companies, you might want to take his advice. As for myself, you can find me on Snapchat (for now).

Jacob Silverman’s Terms of Service will be released on March 17, with a launch party at powerHouse Arena on the same day.

Further reading on technology and culture:

The Boy Kings: A Journey into the Heart of the Social Network, Kate Losse, 2012. (Widely quoted in Terms of Service, Losse is a former Facebook employee.)

The Filter Bubble: How the New Personalized Web Is Changing What We Read and How We Think, Eli Pariser, 2012.

Everything Bad is Good for You, Steven Johnson, 2006.

Chrysanthe Tenentes is co-founder and contributing editor of Brooklyn Based. She consults for startups on product and content strategy and has read (and written) more Terms of Service agreements than the average adult human.