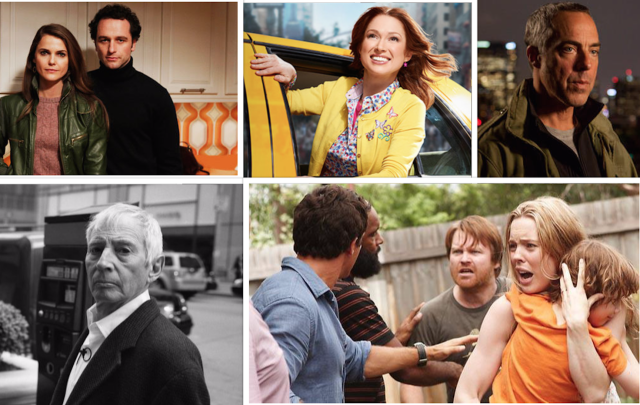 From the star-studded network drama The Slap, to Tina Fey’s new comedy, Unbreakable Kimmy Schmidt, the good television just keeps on coming, even between the season premieres of major hits like Mad Men and Game of Thrones. Because it’s often hard to pick the next show to dedicate yourself to, here are six shows worth tuning into, based upon programs you already love.

For people who miss Serial. . .

Robert Durst, the real life villain who is the subject of Andrew Jarecki’s six-part series, The Jinx, is no Adnan Syed. To begin with, he is almost certainly guilty of three murders, and he escaped bearing any responsibility for them with the help of the best defense counsel his family’s money could buy. He is also generally despicable even apart from the crimes he was accused of–the series’ extensive interviews with him reveal a smug, soulless lowlife whose inability to express normal human emotion teams up with some very off-putting facial tics to leave the impression that we are dealing with a deeply evil robot. That said, the sheer lunacy of the narrative has me hooked: Durst, heir to his father’s New York City real estate empire, probably killed his wife in the 80s, then killed his friend decades later, then killed a third person while he was for some reason posing as a mute lady in Galveston, then went on the lam, and was caught because he shoplifted a hoagie from a Wegman’s even though he had $500 in his pocket and thousands in his car and, after all that, never got convicted. On top of all that, Durst is an epically horrible liar, so it’s hard to avoid getting sucked if for no reason other than to find out how the hell he got away with it.–Kate Hooker. The Jinx is on HBO/HBOGo

Unbreakable Kimmy Schmidt, the latest project from Tina Fey and 30 Rock showrunner Robert Carlock, is finally here and binge-watchable on Netflix and it’s great. From the basic premise (the titular character moves to New York after being freed from the underground bunker she has been forced to live in for 15 years by the maniacal cult leader who kidnapped her as a teenager) to the theme song you won’t be able to stop singing, to the hilarious performances by Ellie Kemper, Tituss Burgess, Jane Krakowski, Carol Kane, et al., UKS is fresh, funny, and fun to watch. Because it’s a Fey/Carlock production though, the ultimate draw is the writing, and they nail it here. If you remember watching 30 Rock and being awed by the amount of original, smart, and subtly subversive jokes jammed into each episode, you’ve got a new show to watch.–K.H.

For fans of The Twilight Zone. . .

The first installment of Black Mirror, the BBC’s popular sci-fi/dystopian series that examines the role of technology in modern times (and in the near future), is disturbing, so much so that you might find yourself wondering whether the mind that dreamed up the plotline belongs to a sociopath. It is definitely dark stuff, but the show is also really smart and different from anything you have seen before. Each episode is a standalone, hour-long story that forces you to contemplate how things would play out in a variety of not-totally-inconceivable scenarios, like if everyone had a chip implanted in their neck that allowed them to record and replay every conversation they had or if it was possible to recreate a dead person using their online presence. There are six available right now on Netflix, but there is a lot to chew on so it might be worth stretching your viewing out over a few nights instead of the usual bingefest.–K.H.

For people who can’t get enough of Carrie…

Anyone who’s a Homeland fan should be watching The Americans. It’s Brody as undercover infiltrator, meets fierce Carrie on a nail-biting mission. The Americans, with full-throttle fight scenes, awesome disguises, complex storylines, and great acting is a hell of a ride. Now partway into season three, the show has been laying some groundwork for what’s to come. It’s welcome, because the charade of Philip (Matthew Rhys) and Elizabeth (Keri Russell) hiding their identities from their children has gotten a little weak. Paige, their 14-year-old daughter, has been drawn to the local church as a place for answers and an outlet for activism, much to Elizabeth’s chagrin. This storyline feels a little contrived, but we’re about to lose it, thankfully. With Elizabeth’s faith in the cause, she’s decided to go behind Philip’s back and train Paige for spy life. This is part of what works with the show–Elizabeth and Philip are in love (sort of) but still hiding things from each other. It feels like it should get old, but it doesn’t. The secret agendas are true to character and add layers to the narrative. The writers very carefully plotted the reveal of Philip’s son, and in juxtaposition with Paige’s fate, it’s a great mirror. Will season four have spies in the making? I hope so.–Sara Webster. The Americans airs on FX, Wednesdays at 10pm, and seasons one and two are on Amazon.

For people who miss True Detective…

If you’re looking for a crime drama while you wait for the second season of True Detective to air, check out the new Amazon Prime series, Bosch. Played by Titus Welliver, The Man in Black for all you Lost devotees, Bosch follows homicide detective Harry Bosch, who pushes the rules in all the right ways. The show, set in L.A., feels like a modern noir, the city showcased with old Hollywood grit as Harry takes on a single case for the run of the season. The narrative takes its time, allowing us to dig into Harry’s case with him, all the while tracking through his unstable personal life–he’s the son of a prostitute and spent much of his life in the foster system, with virtually no family, except for his daughter, who lives with his ex-wife in Las Vegas. The show won’t exactly blow you away with any new concepts–it’s very much cop-genre, and it doesn’t have the eeriness or originality of True Detective, but it has heart. The slow, steady story-telling is intimate, and Titus Welliver really brings it home with this character. L.A. also plays a central role. Harry’s house overlooks the Hollywood Hills, and the shots of him thinking at night and looking over the glittering lights of the city are breathtaking. If we’re going to have another cop show, this is the one we should get.–S.W. Bosch is available for streaming on Amazon Prime.

For those who appreciate Togetherness…

Togetherness is one of the funniest, most honest portrayals of marital strife, but not every couple is willing to spend their escapist TV time on a show that mirrors the kind of discord they experience in their day-to-day lives. Even more challenging, perhaps, is The Slap, an NBC drama so well done you won’t believe it’s actually on network television. The star power helps of course—Peter Sarsgaard, Uma Thurman, and Thandie Newton are all fantastic to watch, but they also have a delicious storyline, adapted from an Australian show by the same name, to play with. Everyone in the series is connected by an incident in the backyard of a tony Brooklyn brownstone, in which a hothead dad slaps an obnoxious four-year-old who won’t stop swinging a bat around when asked. Each episode focuses on one of these nuanced, sometimes sympathetic, sometimes detestable characters, many of whom are cheating or about to cheat on their partners. Because it centers around the old and new generations of a Greek family, it’s also a spot-on portrayal of the clash between modern American, feminist mores and traditional, male-hierarchical families. The fact that it’s filmed in Brooklyn adds to the appeal—it’s fun to recognize the locations they’ve chosen, like The Bell House, which appeared numerous times in one recent episode.–Nicole Davis The Slap airs Thursdays at 10pm on NBC but available to stream here and on Hulu.