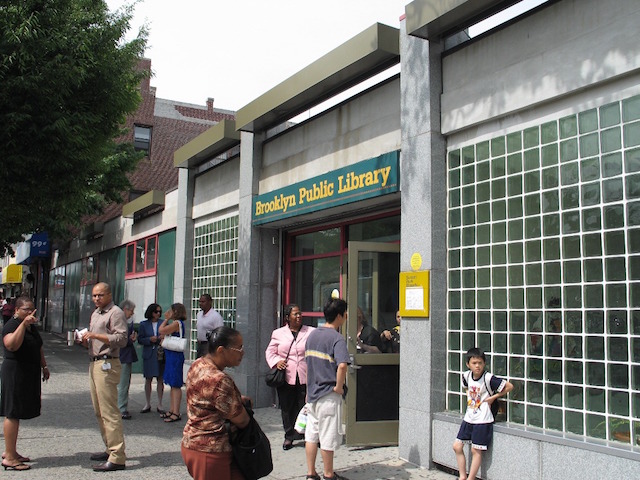 A public library is not a typical amenity for an apartment building, but two public-private partnerships are in the works that will mix rental units and storefront libraries in Brooklyn. The plans for the Brooklyn Heights Library and the Sunset Park Library involve the sale of the dilapidated buildings to developers who will update the branches and build apartment buildings on top of them.

In the case of Sunset Park, all 49 proposed units will be strictly affordable, and leave room for a new, 20,000-square-foot library–roughly 7,000 more square feet than what’s now in place. In Brooklyn Heights, where the public-private partnership is further along, the mixed-use building that is being developed by Hudson Companies will add 132 market-rate apartments, 114 affordable units in Clinton Hill, and will modernize the existing Brooklyn Heights library, already one of the largest in the system.

Both branches can use an upgrade. The Sunset Park Library opened in 1905 and hasn’t been updated since 1998. The Brooklyn Heights Library, established in 1857, hasn’t undergone renovations in over 20 years. But as their planned rehabs have made clear, almost all of the borough’s 60 branches have a list of needed improvements. Of the $300 million the Brooklyn Public Library needs to repair its entire system, the Brooklyn Heights sale has filled its coffers with an additional $40 million to spread around–$13.5 million of which is already earmarked for branches near Atlantic Yards, in Bushwick, and one near the Navy Yard.

Still, not everyone is happy about the trade off. As one commenter on Brooklyn Heights Blog complained, “There are multiple publics to be served especially when selling off the rights to develop on public property. They are supporting a permanent shadow in our future. A life-long blight on the skyline.”

But as architecture critic Michael Kimmelman suggested in The New York Times, Mayor de Blasio has the opportunity to make revitalized city libraries a hallmark of his administration, just as Bloomberg poured billions into cultural venues and parks. Given the mayor’s new after-school program for middle school students, renovating existing libraries would give kids even more resources to use once classes end, or make up for the lack of stacks in schools. One mom in Sunset Park, reported DNAinfo, said that her children relied upon their local branch because her children’s school didn’t have a library.

Using private money for public projects and buildings is not unique to New York. According to The New York Times, there were between eight to ten public-private partnership deals in the U.S. valued at more than $500 million in 2014, compared to an average of one or two projects annually in years past. Such deals offer a viable way for cities to improve their infrastructure and public buildings when they lack the funding.

Here are the plans for these two Brooklyn branches, plus a few more library designs created through public-private partnerships around the country.

The outside of the current Sunset Park branch. Photo: Brooklyn Public Library

Plans to construct a seven-story tower with 49 units of affordable housing above a 20,000 square-foot library would not only upgrade the current library, but also add 7,000 square feet of additional space. A local nonprofit developer, Fifth Avenue Committee, would buy the land and build the multi-purpose building on the current library site. The Library would then pay about $10 million to stock and complete the new branch and reacquire ownership of the library while the developer kept ownership of the housing units. BPL will invite the public to weigh in on the planning and design of the new library, and during construction, they would find an interim site nearby until the project to be completed in 2018–so long as other funding for the project is secured. 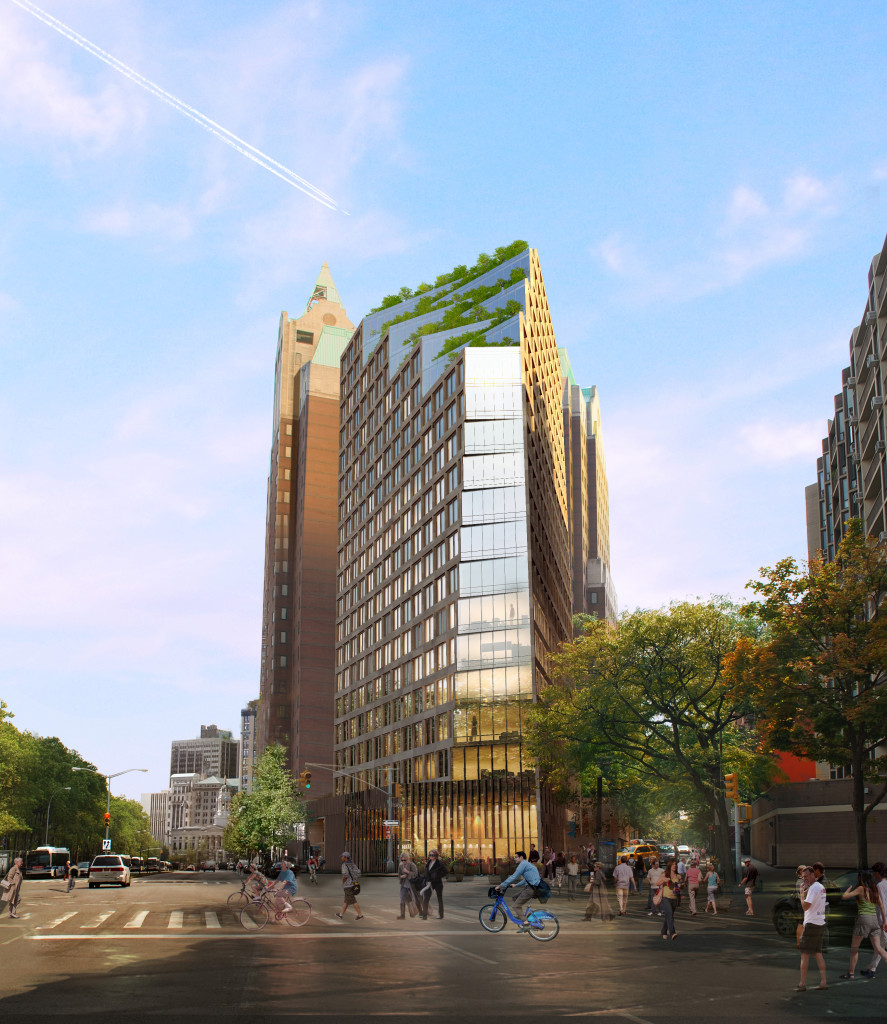 Hudson Companies will develop the old Brooklyn Heights Library into a new 38-story tower, designed by Jonathan Marvel, with 132 apartments and a ground-floor 21,000 square-foot library, as well as 114 offsite affordable housing units. The deal will leave the Brooklyn Public Library with $40 million to upgrade other aging branches. The plan is still in the community review process, and BPL is inviting the community to be involved the design process for the new library. Last week Brownstoner noted that “it will include an online and paper survey, interactive exhibit and a series of workshops.” The first takes place on March 23 at 6:30pm at the Brooklyn Heights Library (280 Cadman Plaza West) and the second one is April 20. 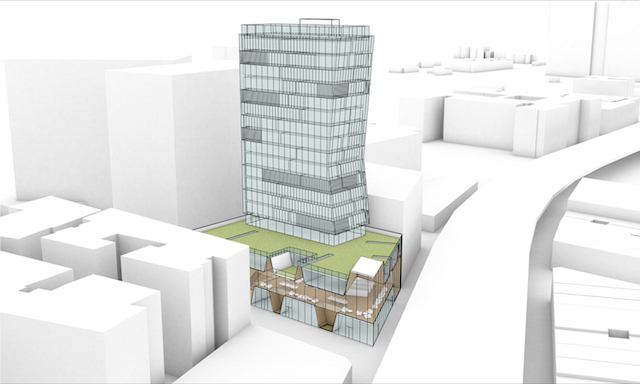 Sketches for a new Brighton Beach branch were created by a team of designers, Marble Fairbanks, James Lima Planning & Development, and Leah Meisterlin, using a digital tool that allows city planners and developers to compare data on what’s needed in the area, according to The New York Times. The plan features a beautiful mixed-use building with apartments, shops and the library. 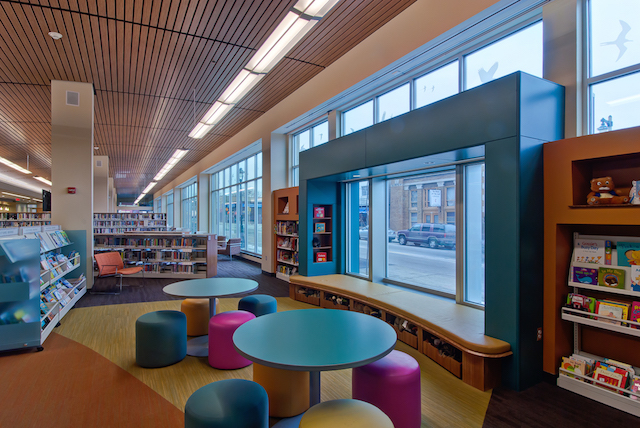 The inside of the new Milwaukee library shows the vast improvements. Photo: Engberg Anderson Architects

This reinvented Milwaukee library, designed by Engberg Anderson Architects, came from a partnership between the city, Milwaukee Public Libraries and private developer Gorman and Company. The four-story building is mixed use, containing the library and subsidized apartments aimed at grandparents raising their grandchildren. According to the Library Journal, the project reduced costs for all the involved parties through federal tax credits. 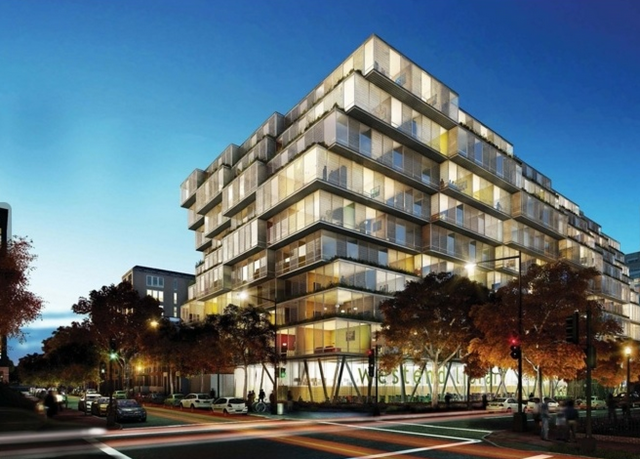 Developer EastBanc Inc. will break ground soon on a project in D.C. that will replace an old library branch with a mixed-used tower including luxury apartments, retail space and a new library. According to the Washington Post, EastBanc Inc. will also build affordable apartments atop a new fire station as part of the deal with the city. Initially proposed six years ago, an activist group affiliated with Ralph Nader sued to stop construction, but was struck down by a D.C. court. The building was designed by Enrique Norton, who also designed a new arts library for the Brooklyn Academy of Music that fell through.