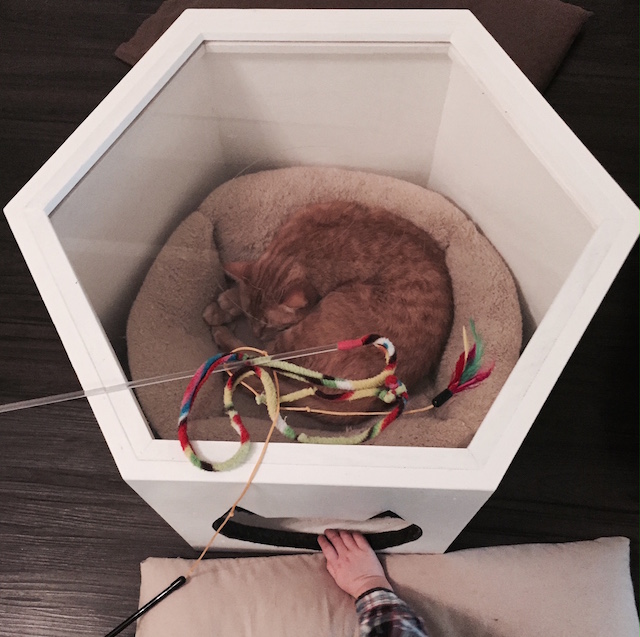 If you like to get your caffeine fix with your feline fix, then Meow Parlour is the place to be. Photo: Meredith Craig de Pietro

Meow Parlour, located on the Lower East Side, is a place where you can drink coffee while you play with cats. It is the first cat cafe to open in New York, although they are already popular in Tokyo, where many apartment buildings don’t allow pets. It’s the perfect compromise–you get cuddles without the long-term commitment of caring for cats.

Although our apartment building does allow pets, my husband is very allergic, so a few months ago, I made a reservation to bring my son to Meow Parlour. (Children 10 and under are welcome only during designated times: Monday, Tuesday and Thursday between 3pm and 5pm, and 11am-12pm every third Sunday.) In my mind, I was picturing a cozy coffee shop with battered, upholstered couches, kittens snuggling in the sunlight, and flocks of friendly cats greeting new patrons. But, I obviously have little experience with cats.

We arrived at Meow Parlour a half hour early, so that we could first check out the separate cafe around the corner on Ludlow Street. With cold brewed Blue Bottle coffee and kitten-shaped macarons, we felt this was a promising start. My son drank a hot cocoa while I signed waivers for entry: don’t give food to cats, don’t pull on cats’ tails, don’t bring in a beverage without a lid, don’t try to wake up a sleeping cat. Also, I signed a contract saying that I realize there are inherent dangers involved with live animals. 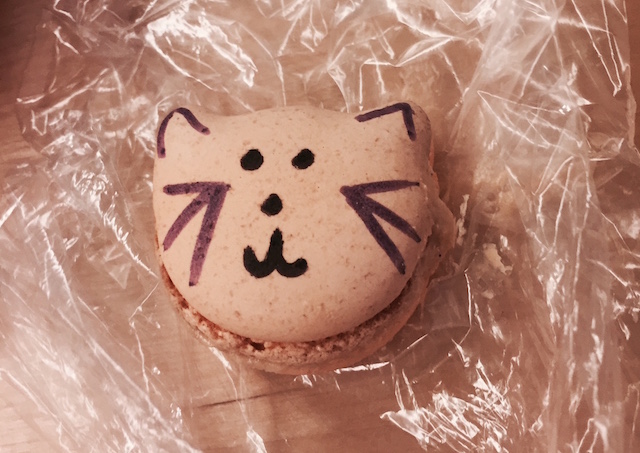 Yes, the inventive macarons for sale at the Meow Parlour Patisserie are in the shape of a cat. Photo: Meredith Craig de Pietro

Finally, 4pm rolled around and we excitedly ran around the corner for our appointment. At the sign-in desk, we gave them our names, and then sanitized our hands, slipped off our jackets, bags and shoes. We opened the door to a sterile interior that could have been a doctor’s office, which made sense because we were about to do a lot of waiting. It was a surprise to find out that cats spend most of their time sleeping, or hiding.

There were already about five kids and their adults inside when we got there, all peering into the glass covered tables where cats slept. A bookshelf lined the back wall full of bins of dozing kitties, and wooden shelving lined the floor, where other cats were hiding. To pass the time, there were children’s books about cats and drawing paper for cat doodling. Most of the kids were too excited by the prospects of seeing a live animal to really settle down for quiet activities. A few entertained each other by playing with the cat toys, and my son was happy crawling on the floor pretending to be a cat. “No touching the sleeping cats,” the employee repeated, as a girl tried unsuccessfully to wake up a dozing kitten. “Don’t put your face in the hiding spot,” the employee told a pair of siblings. “Don’t climb on the scratching post,” the employee told my son.

We opened the door to a sterile interior that could have been a doctor’s office, which made sense because we were about to do a lot of waiting.

Eventually, a brave feline ventured out from hiding, and was spotted. A boy yelled “CAT!” and the group of children moved together in hot pursuit. “No chasing the cats!” the employee yelled, as parents tried to restrain their eager children. 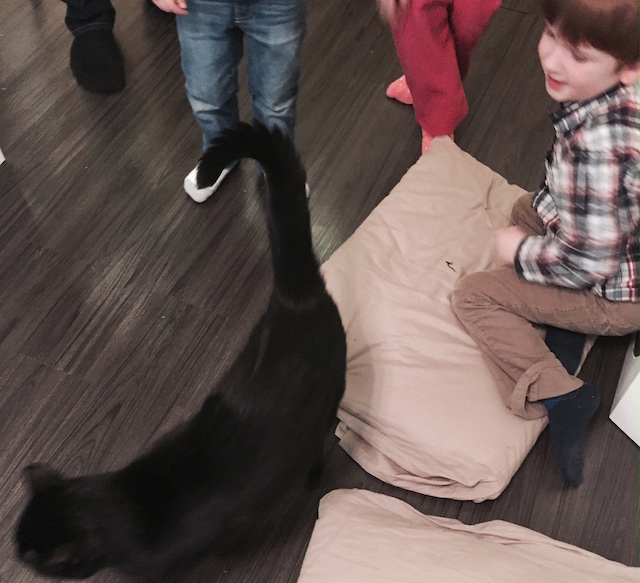 After another long stretch, Meow Parlour took pity on the group and pulled a big fat older cat out from behind the front desk, so that the kids would have something to pet. The docile giant allowed his fur to be pet the wrong way, and his paws to be held, but he drew the line when a boy tried to awkwardly hold him around his waist, and he successfully slipped away back to his hiding spot. By then another cat had streaked through the room, and the kids ran through, hands outstretched, as if Harry Styles had suddenly appeared.

If your child falls in love with any of the animals, adoption is always an option. The process is administered through KittyKind (a non-profit, no kill, cat rescue group) which takes time, so it’s not possible to just walk out carrying your new pet. But as we learned at Meow Parlour, the first rule of cats is having lots and lots of patience.

Meow Parlour, 46 Hester Street, Lower East Side. Open Thursday through Tuesday, 12pm-8pm. Children’s hours: Monday, Tuesday and Thursday between 3pm and 5pm. Reservations strongly recommended, and can be made up to 60 days in advance.