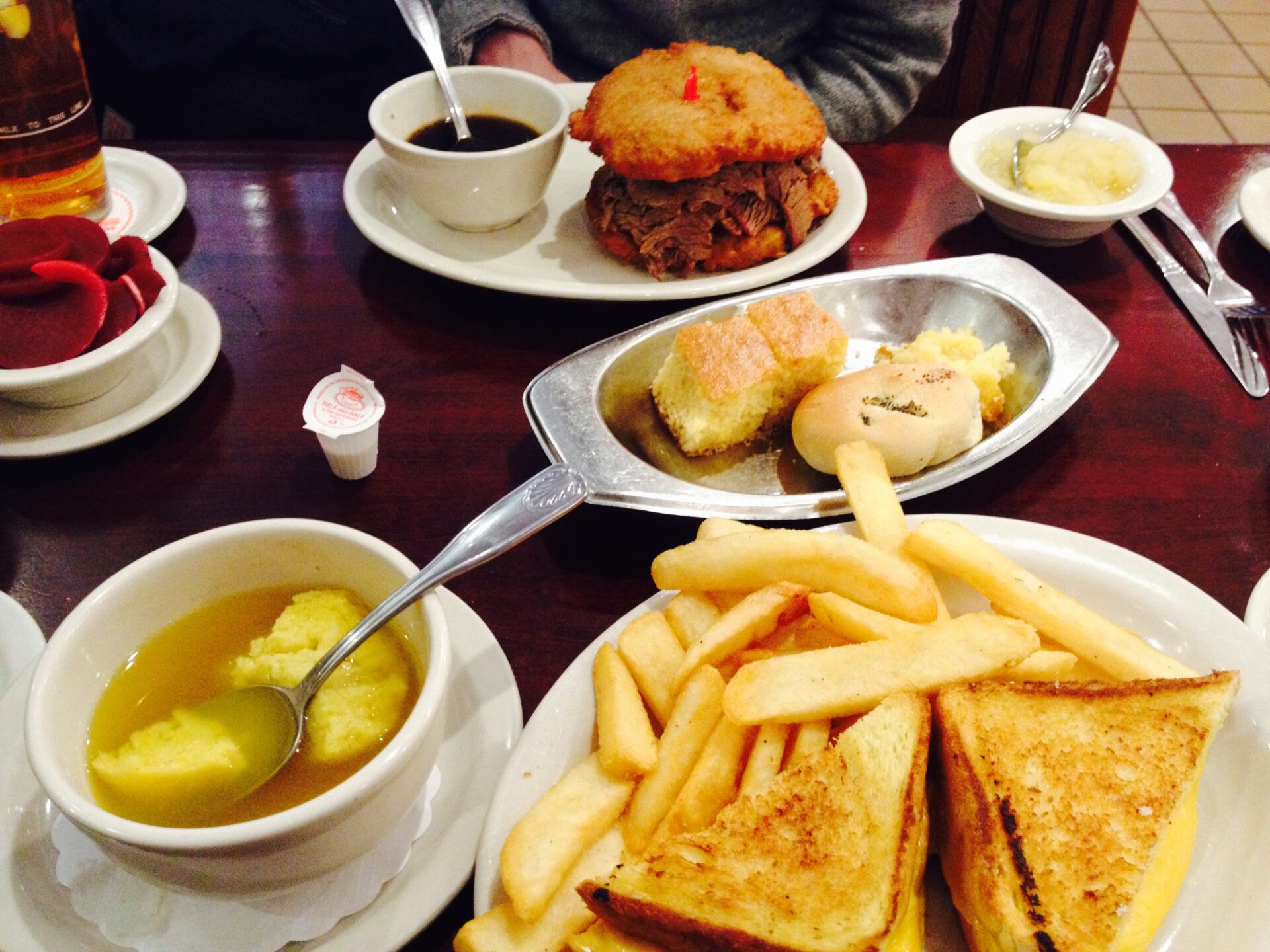 I couldn’t go through this Revisiting the Brooklyn Classics series without a stop at Junior’s. Even though it’s one of the borough’s oldest and most celebrated restaurants, many of Brooklyn’s newer residents only know it as that place Diddy once made his minion walk 13 miles to fetch him a slice of cheesecake, and where Marty Markowitz and other pols stop in every time they want to be seen doing something old-school Brooklyn-y. It’s probably fair enough that many Brooklynites tend to ignore Junior’s, considering that it’s become a local mini-chain with outposts in tourist-trap locations like Times Square, Grand Central, and even Foxwoods in Connecticut. But I’d posit that the original location, on Flatbush and Dekalb at the edge of Fort Greene and Downtown, is still a special place. 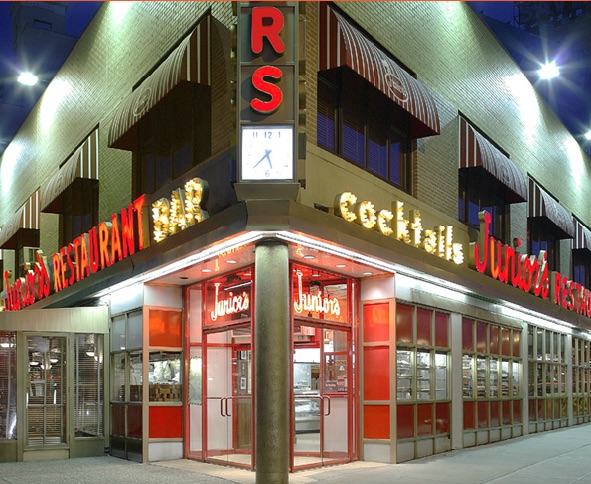 Brooklynite Harry Rosen founded the original Junior’s back in 1950, although his family had actually operated a diner on the site since 1929. Last year, there was a brief flurry of reports that the iconic restaurant would soon make way for yet another Downtown tower of condos, but Harry Rosen’s grandson Alan eventually turned down the $45 million offer, telling the Times that when it came down to it, he just couldn’t stomach the thought of his family’s heritage meeting the wrecking ball. So Junior’s still stands tall, its yellow-and-orange lit-up sign beckoning Downtown diners to ignore that freaking Applebee’s across the street.

Here’s the first thing to know about Junior’s: it’s not all about the cheesecake. While its mouthful of an extended name is “Junior’s Most Fabulous Cheesecake and Desserts,” a cheesecake that has garnered way too much press around the world, the truth is it’s not all that special. Perhaps back in 1950 these creamy slices, topped by gobs of sugary strawberry goop, stood out from the crowd, but in a borough now awash with artisanal key lime cheesecake and maple-bourbon-pecan creations of all kinds, Junior’s legendary cheesecake is, I’m sorry to say, perfectly serviceable but nothing special.

However, it’s worth pushing past those dessert display cases in the front of the store and taking a seat at one of the roomy booths in the back. The super-bright space makes no concession to the wood-paneled, Edison-bulb obsessions of modern Brooklyn; instead it probably looks exactly like it did half a century ago. When you sit down you’re greeted with a pre-meal smorgasbord of free snacks, a welcome development in a city increasingly filled with $6 artisanal bread-and-butter starters. You get a pile of pickles (crisp and delicious), a side of coleslaw (passable), a bowl of beets (canned), and, after you order, platters of dinner rolls and cornbread (both very solid). 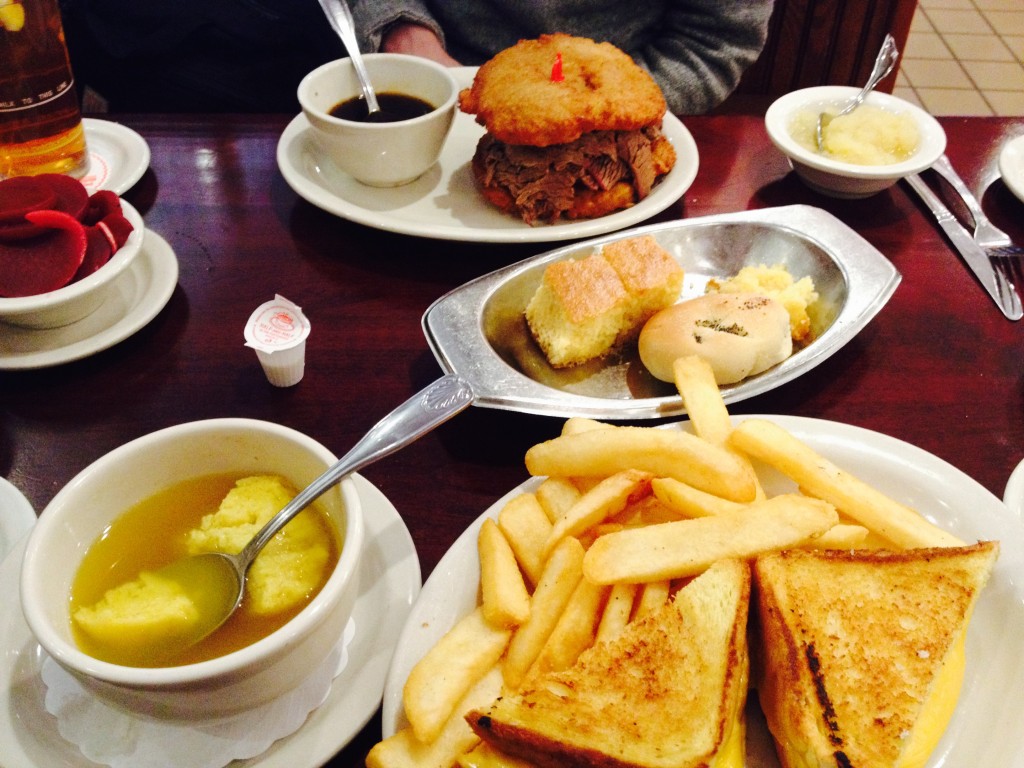 The Rosen family’s extensive menu is half classic dinner, half homage to Brooklyn’s diverse communities, with nods to Jewish, Italian, African-American, and Caribbean cuisine alike. Show me a restaurant anywhere in the world that serves both mozzarella sticks and chopped liver, eggplant parmesan and southern fried chicken, corned beef and Jamaican jerk. There’s also breakfast all day.

The real reason to go here though, in my opinion, are the “old-world” favorites, two Jewish-American classics–potato pancakes and blintzes–both with an emphasis on the American, and by “American” I mean really, really fried. The potato cakes are giant, size-of-your-head wonders, deep fried so that you get that glorious golden-brown exterior, but thick enough that there’s still a hearty heft of actual potato inside. They come with both apple sauce and sour cream; for a serious hangover-busting brunch, ask for a fried egg on the side and burst the yolk open over one of your potato cakes. I’d be remiss if I didn’t also mention the “Something Different” sandwich, in which two of these oversized potato pancakes stand in for bread, with a mountain of beef brisket wedged in between and au jus sauce for dipping on the side. It’s a monstrosity of a dish that isn’t anywhere near possible to pick up and eat with your hands, but they certainly get creativity points here. The deep-fried blintzes, filled with cheese and homemade strawberry, cherry, and blueberry sauce, plus more sour cream on the side, are another extra-crispy, I-don’t-even-want-to-known-how-many-calories comfort food delight, equally enticing on a lazy Sunday morning or for a post-drinking, midnight mega-snack.

On my most recent trip I did notice a single nod to modern artisanal tastebuds at Junior’s: the addition of La Colombe coffee. I don’t think anyone is going to lament the loss of the old-school diner cup of joe, especially since the refills are still quick and free. 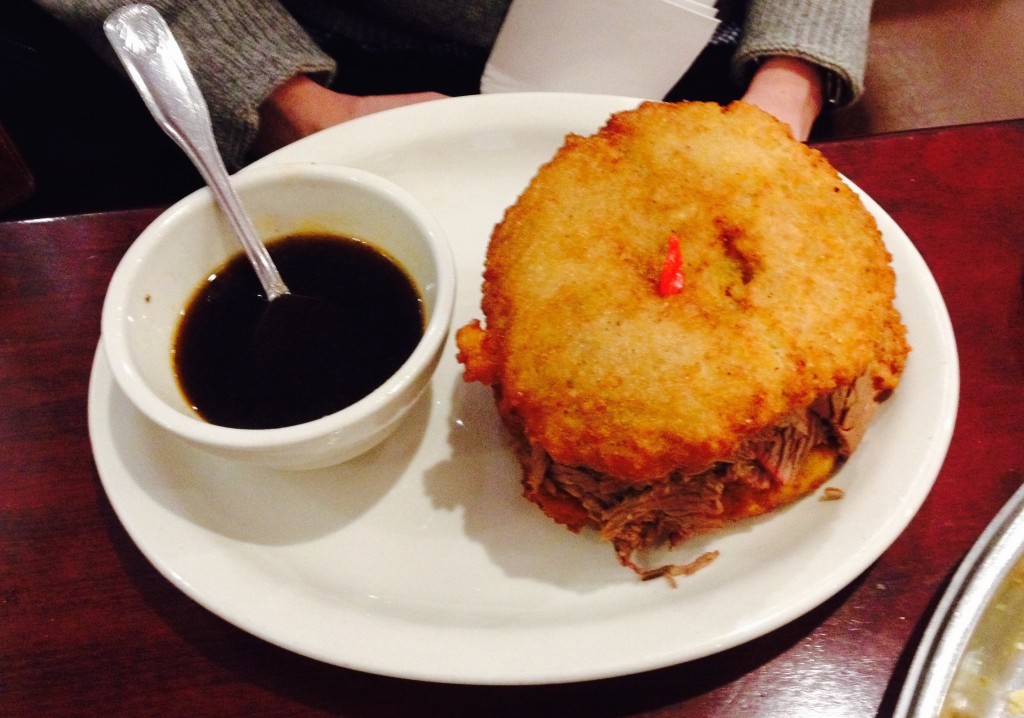 The “Something Different” potato pancake-brisket sandwich. I mean, come on. Photo: Brendan Spiegel

For the most part, Junior’s menu is heavy on the comfort and light on the flavor. A matzoh ball soup offers a perfectly fluffy, starchy ball swimming in very chicken-y soup, but not much in the way of herbs or flavor otherwise. A grilled cheese sandwich, with American cheese and challah bread, is nothing special, but is at least griddled to a greasy golden brown. The fries are nice and crispy, too, but again it’s just solid diner fare, nothing revelatory.

But that’s largely the point of Junior’s. It’s not for discovering new seasonal vegetables or reveling in unexpected flavor combos. We have plenty of places in Brooklyn to do all that. Junior’s, however, is the only place around that is quite like this. Leave Times Square to the tourists and the cheesecake to Diddy, but when I’m in need of a greasy, comforting, not-at-all-experimental Sunday brunch, a booth at Junior’s of Brooklyn has my name on it.

Leave a Reply to erica