When you think of street dance, Park Avenue is not usually the street that comes to mind. But choreographer Reggie “Regg Roc” Gray and director Peter Sellars are making the posh Upper East Side artery the place to see one of the city’s most exciting displays of physical expression with their new show, FLEXN, which opened at the Park Avenue Armory yesterday. For the next 10 days they will attempt to add a different type of cred to a street style phenomenon that up to now has had to rely on venues like subway cars and the steps of Union Square Park in order to attract an audience.

FLEXN centers around a street dance form called “flexing”—or “flexin” or “flexN”—a style pioneered by Gray that combines rhythmic movement and contortion. The form emerged from Jamaican dance halls and Brooklyn reggae clubs that were popular in the ’90s. Evolving over time, flexing hit the streets and began to gain traction around 2005, finding a home in dance circles all over the world.

“The show touches on the Eric Garner and Michael Brown decisions, and then we get into this section of juvenile justice,” says Gray. “This is when it starts to get really political.”

The Armory project was brought to Gray by visual artist and choreographer Jason Akira Somma, whose own work was exhibited at the performance and art space last year as part of the artists in residence Under Construction Series.

“Let’s just say I’m blessed to have known Jason, and for him knowing and understanding a lot of the history of flexin’ and some of its pioneers,” says Gray, who began dancing when he was three years old and credits Michael Jackson as his inspiration, pushed into movement after seeing the videos for Thriller and Bad.

A Brooklyn native, Gray was introduced to reggae music by his family and immediately took to the beat. His first experience dancing for an audience was at a block party as a teen, after which he was motivated to learn a bit more about “dancehall” or “brukup,” the form that eventually took him into flex.

“You have bone breaking, you have pausing, gliding, get low, connecting, hat tricks and punch lines—all these styles come together in flexing,” says Gray. Naturally, some of the flex styles such as bone breaking (which pretty much looks exactly how it sounds,) elicit more of a response from an audience. “People do get a little freaked out sometimes by what the body can do,” says Gray. “But that’s the thing: We want people to react; it gives us energy and everything flows that way.” 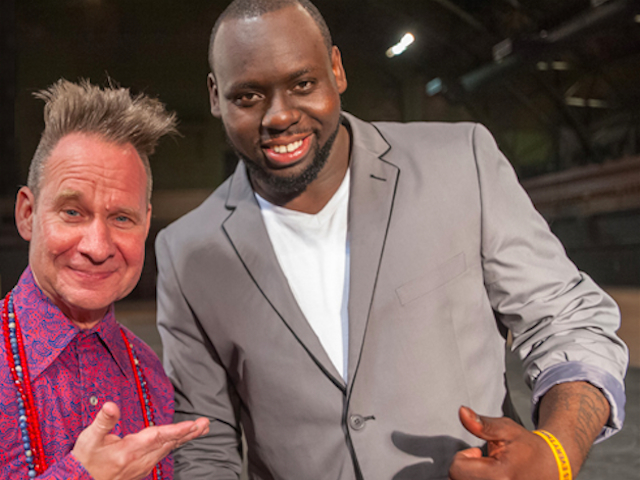 With their new show FLEXN, director Peter Sellars (left) and choreographer Reggie Gray are hoping to open up a new dialog on both street dance and social justice to a more diverse audience. Photo: Park Avenue Armory

Gray specializes in pausing, a style he created after losing a battle, coming home and throwing on a tape of himself dancing. “We will often record ourselves and watch it backwards, try to mimic that rewind style,” he says. “But I pressed pause and watched it move inch by inch. And I was like, ‘I want to dance like that.’”

Animation and modern cinematic effects often inspire dancers of flex. They look to Kung Fu films for ideas, and Gray admits to having been motivated by The Matrix. But mimicking martial arts masters or CGI effects takes a great deal of practice.

“Once I knew what I wanted to do, I started practicing it every day,” he says. “It takes work to figure out how to look animated, cinematic. I wanted to move like the agents in The Matrix did, but with the pausing. And it developed into a whole style.”

In high school Gray found a few like-minded dancers and formed a team called Hyperactive, which gained local popularity through talent shows and dance battles. Gray himself won several top titles and went on to dance for music videos, television shows, and reality competitions—he flaunted his own moves on the third season of America’s Best Dance Crew and founded a dance competition called The D.R.E.A.M. (Dance Rules Everything Around Me). Through The D.R.E.A.M., dancers come together to learn from one another and develop new styles while battling it out with the best and brightest in flex. He now spends his time choreographing and organizing battles and performances, filling any spare time by filming and editing dance videos. FLEXN is the largest show Gray has ever choreographed. For it, he will utilize the various forms of flexing in different scenes, coming together to communicate an overarching frustration and concern with our justice system.

“The show touches on the Eric Garner and Michael Brown decisions, and then we get into this section of juvenile justice,” says Gray. “This is when it starts to get really political.”

For FLEXN, dancers utilize their unique abilities and perform alone or in groups to communicate their feelings about our current social and political climate. There are about 22 dancers in the show and they have been rehearsing for a little over two months. Many choreographed their own pieces, lending each movement an air of deeply personal experience and creative thought.

“For example,” Gray says, “in the protesting piece, we are using bone breaking. For our dancer, it represents him being broken up by the system. The metaphors are there through the dance. Sometimes you feel like no one is going to listen to you, or to us as a group in society. This is our way of communicating, through dance.”

This sort of political and social commentary is not new for Gray. In 2012 he released a video he and Sellars co-directed called Dance for Justice that honored Trayvon Martin and touched on the high tensions of the time. The video shows dancers performing for one another in a park, laughing and cheering each other on. The video communicates a sense of camaraderie and joy through dance, a stark contrast to flashing images of newspaper headlines about the shooting.

“We tackle the Eric Garner and Michael Brown situation in the Armory show because this piece was built around that time,” says Gray. “We figured we have a language that we could communicate to people, and a broad band of people that can communicate without speaking. We know our dance can tell a story. It isn’t about fashionable dance moves, it is about our bodies can do, what we can do while telling a story. It is like we were destined to communicate these issues because our bodies can move this way.”

Dance isn’t the only form of communication being utilized for FLEXN. Each performance will begin with a panel discussion that includes local community leaders and activists. Participants will answer questions and debate social issues under themes like “Race Still Matters,” “Reforming Rikers,” and “Judging the Juvenile Justice System.” New York City Police Commissioner Bill Bratton has been invited to speak, as has Mayor Bill de Blasio, along with professors, activists, and even the dancers themselves. The decision to put the panel before the show was intentional, letting the audience know what they are in for, what messages the dancers of FLEXN are trying to get across.

“I’ve been a part of Stop and Frisk before, and it is something that really gets to you and gets under your skin,” says Gray. “I want to say something about it, and I feel that it is something that needs to be said and talked about. That is why we wanted to include the educational part of our show. It isn’t to settle anything, it is just to bring up the conversation and say ‘Hey, listen, this is what we go through, and this is what you go through, so lets come to a compromise.’

FLEXN will run at the Park Avenue Armory March 25-April 4.