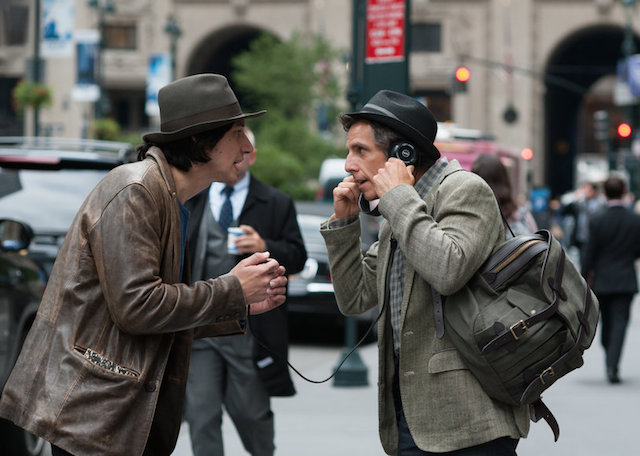 A while back, I became friends with a young guy who biked around Brooklyn with a bird on his shoulder. For a guy who prized “open communication,” and didn’t own a smartphone (the bravery!), he never–not once–remembered to ask me a question. Still, I was jealous of the ease he seemed enjoy in life: his lack of concern for the future, the beautiful loft apartment he paid nothing for, the stunning girlfriend who liked him even with the bird. He was, down to the height, the spitting image of Jamie, Adam Driver’s character in Noam Baumbach’s While We’re Young. Jamie isn’t alone. Baumbach’s latest comedy is so razor-sharp, so perspicacious, that nearly all of us can spot someone we know–even if that person is ourselves.

“Isn’t it amazing that we can act like this and people will still be attracted to us?” Image: A24 Films

While We’re Young tells the story of Cornelia (Naomi Watts) and Josh (Ben Stiller), a forty-something married couple from New York, busy watching all their Brooklyn friends give birth to high-maintenance babies. Despite all their stainless steel appliances and Macbook Pros, Josh and Cornelia’s relationship feels stagnant. Cornelia can’t physically conceive a baby, and Josh has been stuck working on the same documentary for a decade. It’s a New York Times Magazine problem for a Sunday Styles demographic, but Baumbach still–magically–allows us to feel empathy for them. It’s a testament both to his impeccable writing and my class status.

Life starts to change for the couple when they meet Jamie (Adam Driver) and Darby (Amanda Seyfried), a sockless bike-riding married couple from Bushwick. Jamie, too, is a documentary filmmaker, and he showers Josh with gratuitous compliments and Fedora advice. Cornelia and Josh become enamored with Jamie’s idealism/nonsense, and a real friendship forms. Even though the set-up feels a little crafted, the film’s details are so delectable, they hide the story’s construction. Jamie and Darby live a life of typewriters, street beach parties, VHS tapes, and absolutely no Facebook. The couple prides themselves on how little they use technology – true heroes in a harsh landscape dominated by violent, freelancing cyborgs.

What Baumbach gets so immaculately right, is the immaturity and narcissism at the heart of these men’s psyches. They aren’t bad people, per se, just puerile. Josh’s stepfather, played by a brilliant Charles Grodin, is the only emotional adult in the piece, which makes sense because he’s nearly 80. Josh is enmeshed with his six-hour documentary about capitalism/himself and refuses to tolerate any criticism. He’s a manarchist in chinos, and quite possibly, my worst nightmare. That’s of course if you’re excluding Jamie, who manages–shockingly–to be worse. Jamie is charming and precious and likes to squeeze his girlfriend’s boobs in public. He’s the type of guy you meet at a party who has intelligence but no substance–the handsome dude in the hilarious trenchcoat who wants nothing more than to show you his animated web series about masturbation. Adam Driver plays this character to perfection.

What of the women, you ask? Great question! I have no idea. While Josh and Jamie have full lives, if grating ones, Darby and Cornelia play into nebulous white-girl types. Cornelia wants to have a baby and a husband and Darby wants to have a boyfriend and an ice cream business. Though there’s nothing wrong with either of their dreams (although, ice cream? Overrated. Let’s agree to disagree), their characters feel flat, their ambitions, embryonic. It’s not the actresses’ fault. Josh and Jamie experience full-on character arcs. Cornelia and Darby? They just kind of live and go on, with the same useless first names.

It’s shocking to me that a movie that is so nearsighted about women can be so mature about everything else. Baumbach intuitively understands that growing up is a process, that just because you’re married and understand what a stock is doesn’t mean that you’re an “adult.” As many of you may know, Brooklyn now sports its own adult preschool (and if you didn’t know, I’m so sorry to be the one to tell you). The mission behind the school is to help ‘real adults’ discover their inner child. But I can’t imagine that anyone who would ever apply to such a nightmare would have that much trouble looking for it. So many of us, like Josh, still live life in crayon. We have teenage relationships and make teenage salaries. There’s no reason to mourn our childhoods. We never really left them.

There’s a real sadness to While We’re Young, but it’s so disguised by humor it’s sometimes hard to feel. Whatever you want to say about Baumbach (but please, not on my Facebook page!), he’s one of our smartest writers, a director blessed with a genetic gift for dialogue. “You have arthritis in your knee,” Josh’s doctor tells him. “Arthritis, arthritis?’ Josh asks. “Yes,” his doctor says, “although usually I just say it once.” I burst out laughing when I heard this line, which is embarrassing, because it’s a joke about arthritis. But it demonstrates Baumbach’s sensitivity towards language–something anyone who’s seen The Squid and The Whale and Frances Ha can verily attest to. It may not be “ROFL” kind of humor, but it’s smart and sensitive, and doesn’t include Seth and James Rogen-Franco.

While We’re Young opens in Brooklyn this weekend, a homecoming of sorts because the film is rife with new Brooklyn imagery–Fulton street bike rides, Bushwick pizzerias, white women twerkers–and self-conscious about its identity. The gentrifiers are neither monsters nor heroes, but adult children with embarrassing hats and expensive record collections. I’m not sure how audiences will react when they see the film. My only hope is that they’ll turn down the record they’re playing, stop texting the loser they’re dating, and listen, listen, listen.