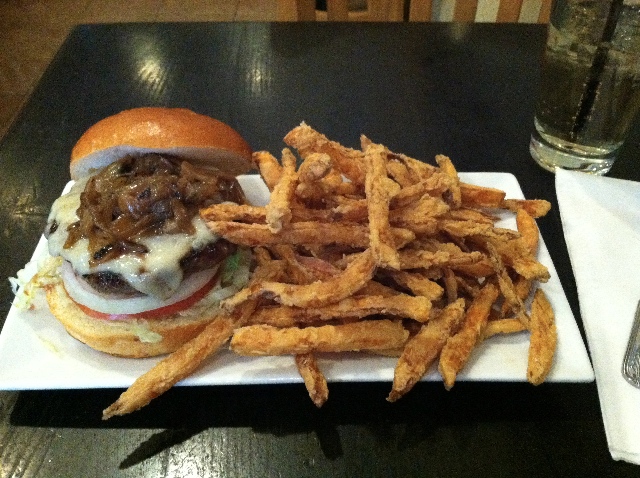 An offering from The Burger Bistro: Beef burger with Swiss cheese, caramelized onions, lettuce, and tomato on a brioche bun, with sweet potato strings. (David Chiu)

Call me a cheap skate, but I’m someone who feels there is something fundamentally wrong when you have to pay more than five dollars for a hamburger. I mean, it’s just a hamburger for God’s sake, not a filet mignon. Yet, there is that appeal of buying a high-end burger from such popular places as Shake Shack, Five Guys and Umami, perhaps because unlike what you get at fast food joints and diners, there’s more of a premium with the quality of the meat, how it’s cooked, and the type of fixings it comes with. It might make me sound uncouth, but I’ll take a hamburger in any form, from the good ol’ White Castle sliders to the deluxe special at a Greek diner.

There does a come point, though, when you do kind of get tired of McDonald’s, and having recently run out of other lunch option in my neighborhood, I decided to splurge a bit and try out The Burger Bistro, a relatively recent joint in Bay Ridge on 72nd Street and Third Avenue. When it first opened, I didn’t think it would last given that Bay Ridge is kind of a blue collar neighborhood that wouldn’t go for a burger that starts at $9.25 (and that is without a side order and/or a drink); also, there is a McDonald’s just a block away. Yet, the Burger Bistro has survived and it draws customers each time I pass by there. 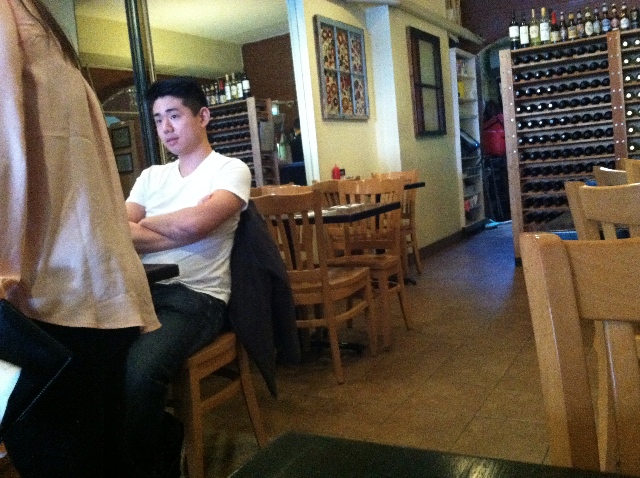 Inside The Burger Bistro in Bay Ridge. (David Chiu)

The decor inside feels like something out of a cozy European pub–not the sterile plastic ambiance of fast food joints. (This place also serves beer and wine). Unless you’re a pizzeria or a fast food place, lunchtime is usually kind of dead in Bay Ridge. But on the afternoon I visited, it had a lively busy crowd of families and friends. (Later, a bigger group of people showed up, requiring additional tables).

I deliberately stopped by around 1 p.m. for the establishment’s $11 lunch special, which includes one special topping and one side. (Drinks aren’t part of the special, but you do get free refills). A waiter handed me a laminated menu and red pencil to check off the type of beef, bun, toppings, sides and drinks that I wanted—the first time I’ve ever done something like that. (It’s probably a relief for the wait staff.) Given that I’m gonna be spending more than I would usually get from an extra value meal at McD’s, I decided to fancy up my order: a medium well done burger with lettuce, tomato, caramelized onions,and Swiss cheese on a brioche bun–and a side order of sweet potato strings. (Other burger options at the place include Kobe beef, lamb, turkey, chicken, and tuna steak)

The wait time for my order was maybe about 15 or more minutes, which is different from what I’m accustomed to, even if I was ordering at Shake Shack. And when the waiter finally handed my plate, the burger looked a bit small compared to the generous heap of batter-dipped fried sweet potato strings.

But looks can be deceiving. It turned out the burger was very filling as it was delicious–it had that grilled Burger King-y kind of taste but much better. The beef tasted fresh and didn’t have that frozen after-taste that most of us are probably accustomed to at diners. The brioche bun was sturdy and didn’t break apart, thus not leaving a squishy mess on my fingers or my plate. The fries were addictive, providing a nice change of pace from the white potato ones. My stomach was filled to the point that it was struggle for me to finish that last fry.

As a freelancer, I don’t think my wallet would allow me to go on frequent visits to The Burger Bistro, but I would certainly consider once in a blue moon or  if I was dining with friends. But the quality of the food is of a high standard, and–to paraphrase from a recent fortune-cookie message–that’s something you can’t really put a price on.