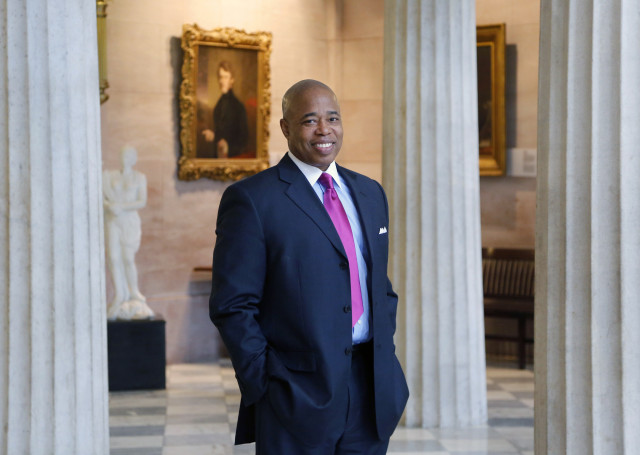 Eric Adams, Brooklyn’s first black borough president, has been in office for over a year now. Based upon the subjects of his press releases so far, he’s taken the largely ceremonial role of borough president much more seriously than his predecessor. When the bombastic Marty Markowitz was in office, his staff often sent memos noting that he was co-hosting events like the “Candidate Stickball Challenge” or performing various ribbon-cuttings. The statements coming out of BP Adams’ office, by comparison, are far less geared toward photo ops. Some of his ambitious proposals to date include the recent Access-Friendly NYC initiative that he unveiled to make NYC public buildings even more accessible than what the Americans with Disabilities Act requires; a series of town hall discussions he initiated to advance police-community relations in the aftermath of the Eric Garner decision and the assassination of NYPD officers Rafael Ramos and Wenjian Liu; and the advancement of gun safety in New York through the adoption of pilot programs in the NYPD such as one using fingerprint recognition technology to fire guns.

While some are critical of the fact that he has taken up too many causes, Adams says he does not want to be known for just one issue. He is also working to connect Brooklynites in any way he can, from opening up Borough Hall to a wide range of groups from all over Brooklyn for events and meetings to broadening Wi-Fi coverage throughout the borough.

I sat down with the warm and welcoming Adams in a stately Borough Hall conference room in March to learn more about his plans for Brooklyn and beyond, including his interest in a future run for mayor. Below is the condensed version of our conversation–but you can listen to the entire 43-minute interview here.

Brooklyn Based: What was it like for you growing up here in Brooklyn? How do you feel like that affects your role as borough president?
Borough President Eric Adams: The greatest impact was my growth between the ages of 21 and into adulthood, because that was the time when I was really able to see life in Brooklyn. It was a learning experience, realizing that unfortunately Brooklynites live in silos. We basically coalesce around people who look like us, talk like us, sound like us. I believe that is one of the greatest travesties in the borough. My goal is to have people break free of that.

BB: What influence has your background as an NYPD officer and captain had on your current role?
EA: Policing allowed me to be on the front row…When you went out and dealt with seeing someone die because they froze to death because they didn’t have a home; when you saw a woman whose stomach was cut open because of domestic violence; when you arrested a child at 17 who couldn’t write his name, that’s a different view. My public safety life allowed me to go into politics as a state senator and as borough president. It was not pieces of legislation merely written on paper. It was a very real view when I saw the stop and frisk bill that I introduced. I remember seeing young men who were unjustly stopped and frisked and how we traumatized them.

BB: How are you going about improving police community relations as borough president?
EA: We don’t have a law enforcement problem throughout the city. We have a public relations problem. That erosion of policing did not happen overnight. That rookie who raised his right hand and swore to be a police officer 20 years ago was raised in a police department where it was anti-community police relations. Community policing was a curse term if you said it to Giuliani or Bloomberg. We have to turn that around and we can do it.

We need to turn the cop on the corner as being not reactionary but proactive by interacting with people every day. For example, if you see a person walking down the block with a little child, talk to them about the Pre-K program—‘How are you doing ma’am? I see you have a little child. Do you know that we have a Pre-K program in the city? Hope he can get in school.’

Anytime you have an industry where the only time you interact with the public is when you are telling them that they did something wrong or you’re giving them a summons or you’re breaking up a fight–if you’re seeing [officers] at their worst time then you’re going to believe that this person is the bearer of bad news. We need to become bearers of good news.

BB: You’ve been characterized as not necessarily having one cause or one issue that defines you. Is that the way you see yourself?
EA: Yes I do. I got the Jay-Z mindset. I have 99 problems…I can’t say the rest. [laughs] I think it’s a luxury. I tackle this with my internal staff sometimes. My staff often wants me to [focus on] one issue. If I were to say I’m just going to be known as the housing borough president, what do I do with those with educational concerns? What do I do with those who are having employment issues or health issues or domestic violence issues or public safety issues? Do I just ignore them so I can at least say I was their housing borough president? I don’t want to do that.

Brooklyn has 99 problems. I need to have 99 solutions.

BB: You’ve said you wanted to be known as the technology borough president. What does that mean for you and how do you hope to achieve that?
EA: I believe we should have textbook-free classrooms. There’s no reason our children are carrying around mounds of books when everything can fit on one tablet.

We [want to] broaden Wi-Fi throughout the entire borough. We should not lose signals just because we go to a particular neighborhood. Brownsville needs Wi-Fi just like Borough Park needs Wi-Fi.

Then I want us to finally embrace the concept of real time…The police department embraced real time to track crime. They were able to see patterns right away. They were able to identify it quickly, apply resources to their problem and correct the problem. I would like to see government go to real time.

BB: What is your view on gentrification and how do you feel it’s affecting the borough?
EA: I think gentrification is a mindset. I believe that people who come in with an arrogant approach are gentrifiers, not people who…don’t look like the people who lived on the block previously.

People who are gentrifiers are…often times…moving into the community with the belief that the people in that community didn’t know how to run their community and they ran it down. This wasn’t the reality. Many of these communities experienced neglect.

Those who want to gentrify…should come in with the belief, ‘I want to improve and help this community and not take over this community.’ Then those who are there must embrace the understanding that no community belongs to an ethnic group…We cannot believe that the communities are being destroyed. They are evolving.