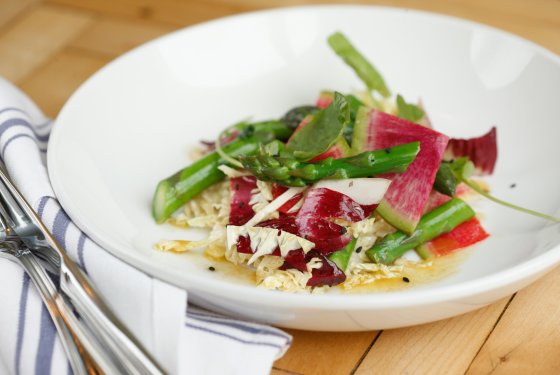 If you’re like most native/longtime New Yorkers, your favorite thing about traveling elsewhere isn’t finally breathing fresh air for the first time in years, but the chance to complain about how the water in other places just doesn’t taste as good as ours. (And of course that makes the bagels and pizza everywhere else subpar, too). Similarly, when Californians move to New York they looooove to gripe about how our food isn’t up to their very exacting standards. Too few fresh fish tacos, no avocados on every corner, no In-N-Out, no Its-It, not nearly enough French-fry-stuffed burritos, etc, etc…The truth is, they’re not entirely wrong. California cuisine, when made outside of a Pizza Kitchen, is undeniably delicious, fresh, and often cutting-edge. I hate to say it, but those Left Coasters know what they’re talking about. Fortunately for all of us, said Californians keep moving to Brooklyn and opening restaurants.

The latest chefs bringing Cali cuisine to Kings County are Northern California natives Nate Smith and Sophie Kamin, the husband-and-wife team behind Williamsburg’s excellent Allswell. Smith and Kamin have taken the Clinton Hill space formerly home to Maggie Brown and outfitted it with a redwood bar and breezy, exposed-brick design for their just-opened Bar Bolinas. The name comes from a Marin County beach town, and while many of the ingredients are local, the menu is largely influenced by their home state’s produce (artichokes, Meyer lemon) waters (sardines, uni) and farms (tri-tip steak), along with some Mexican and Asian flavors. But NorCal natives will probably get most excited about sighting Dutch Crunch bread here. A local staple found at practically every sandwich shop in the San Francisco Bay Area but nearly nowhere else (and no one really knows why), Dutch Crunch is a dense and doughy roll with a sweet finish and a distinctive raised crust resulting from a yeasty coating. It tastes a bit like a slice of sourdough married to a perfect potato roll. It’s also the perfect vehicle for a cheeseburger, a supremely juicy Vermont-beef patty topped with melty Gruyere, plus housemade mayo and pickles on the side–a not-too-fancy, exquisitely executed entree. It’s one of the best burgers I’ve had in recent memory. If this is California cooking, count me in. 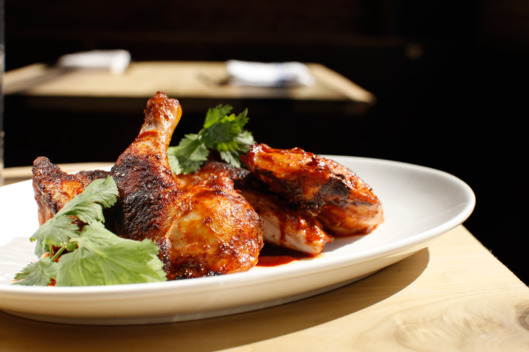 The rest of my first meal at Bar Bolinas was hit or miss, but mostly hit. An artichoke small plate came with olives, grana padano cheese, and braised celery that was tastier than I knew celery could be, but the artichokes themselves were devoid of flavor (I suppose that’s our fault for living so far from artichoke country). More successful for me was the broccoli di cicco–a sweet heirloom variety–grilled and served over slivers of sweet potato in a sake-spiked soy concoction. The spicy, Mexican-influenced pasilla chicken entree is divine, served over spigarello (a rabe-like broccoli leaf). It is slightly annoying that relatively obscure words like “spigarello” are presented on the menu here with no explanation–but then, vague descriptions have become the norm at Brooklyn restaurants. I wasn’t that bothered, ultimately, especially when I ended the meal with strawberry fool–sweet berries over a vanilla bean custard and fresh whipped cream–delectable enough that I was scrounging through the nooks and crannies of the requisite mason jar it was served in for every last taste.

Bar Bolinas isn’t the cheapest dinner on the boulevard formerly known as Murder Ave, at $16 to $26 for an entree and $8 to $14 for sharable small plates. But there’s plenty on the menu that I’m excited to return and try — particularly some of the seafood dishes, like sepia skewers (translation: cuttlefish) with long hots (peppers), horseradish and celery root. And that Dutch Crunch burger is worth a trip for sure. Score one for the West Coast.