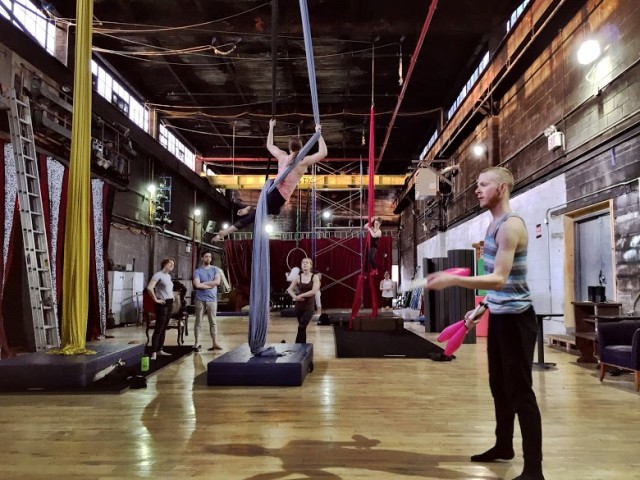 The idea of hopping the next freight train headed out of town to join the circus may seem like a decision one would only make in a black-and-white movie, but it’s actually quite easy to run away and become a trapeze artist in Brooklyn. Last week, I hopped a train, and right off the Wilson L, The Muse—a Bushwick-based circus school and venue that opened its doors last month—welcomed me into their enormous, high-ceilinged new space to learn about their community and try some acrobatic maneuvers myself.

Leading me through the door was Angela Buccinni, a dancer, acrobat and the petite, broad-smiled powerhouse behind The Muse. Buccinni was eager to show off the extensive renovations to the 7,000-square-foot new space, which is a far cry from where The Muse actually started—her Bushwick backyard. In 2010, Buccinni, who has been dancing since the age of six, and is a graduate of the Boston Conservatory, started offering a friend outdoor dance lessons on a homemade floor behind her house, but her yard soon became a place to pursue her passion for the circus, and the site of performances that drew over 100 people at a time. Soon Buccinni and her team were looking for a Big Top to call their own. They secured their first official facility in Williamsburg a year later. This past November, however, VICE’s widely bemoaned expansion resulted in the loss of their space. “It felt really sudden,” said Buccinni. “It literally felt like a rug was pulled, and we had no idea where things would land.”

Despite the hardship they faced as their home began to quite literally fall apart—months before the official end of the lease, persistent drilling and the beginnings of construction on the roof rendered the old location too unsafe to learn circus tricks—an enormously successful Kickstarter campaign to the tune of $60,000 gave the school the opportunity to not only rebuild, but to actually expand to an even larger space than they occupied previously. Stretching that $60,000 they had raised as far as possible meant getting their hands very, very dirty to convert the former foundry they had chosen as their new home to the circus school they had all envisioned.

“I never thought I’d understand how to lay flooring, do sheet-rocking, or understand what I now know about electric,” Buccinni said. “But, you learn by necessity. I want this place to be a space where you’re really free, where you’re able to be a kid again.” 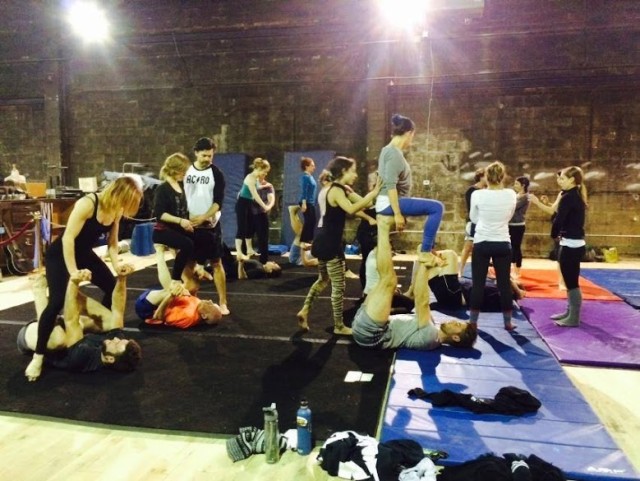 The very first Acro workshop at the new location, just prior to the space’s official opening in April. Photo: EunoiaImages

When my first session at The Muse started with a warm-up round of high-energy jump rope, I understood what she meant. My fellow circus folk-in-training and I ran around the room, smiling and laughing while hurtling over the rope one after another. Following the warm-up, our group lined up in a row to work on our handstands. One shaky attempt at a time, I felt myself getting progressively closer to hoisting my legs all the way up in the air with poise. After our handstands, it was time to hold hands with strangers and try out a series of acrobalance poses under the guidance of instructor Yoni Kallai. These poses all required us to counterbalance our weight with our partner, to trust that the opposing forces between our bodies would enable us to fly. To make them work, I had to learn to just dive in, without letting uncertainty and indecision get in the way of the shapes we were to mold our bodies into.

For Buccinni, this is the most important part of the experience training in the circus arts provides: “It’s about building confidence and understanding that you’re capable of so much more than we understand we are.”

The Muse’s new spacious headquarters has expanded what the school can now offer to the community. Although the school still has classes for those looking to hone their abilities in dance, aerial work, flexibility, acrobalance, and many other skills under the umbrella of the circus arts, they now also have the room to offer family-oriented programming and classes just for kids. Also, their roomier location provides another venue for independent artists to stage performances. On May 29, the school will host performers from The Gowanus Circus, a group who lost their facility in a somewhat similar fashion as The Muse, for their third anniversary show.

Learning about the space’s history and hard-earned reopening, Buccinni and I sat on furniture salvaged from other DIY spaces that were, unfortunately, not able to reemerge as magnificently. As we spoke, aerialists practiced on hoops above our heads, while a performer’s baby played on the sidelines, happily watching his mother slither up and down the long piece of silk suspended from the 30-foot ceiling. In that small moment, the tight-knit, dedicated community Buccinni spoke about—people actually willing to pour their own labor to sustain a home they care deeply for—was very present in the room.