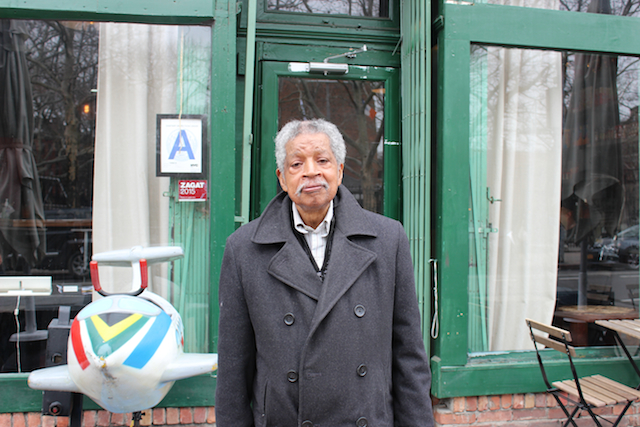 Mauricio Lorence has lived in Clinton Hill more than half his life. Photo: Gabrielle Sierra

Though we’re fans (and publishers) of neighborhood guides and lists of where to eat right now, we also recognize that they tend to follow trends and overlook neighborhood gems. To that end, we’ve started a new series called Neighborhood Expert in which we chat with a longtime local for the scoop on their favorite spots and their take on how the area has changed.

How long have you been in Clinton Hill?
It is going to be 41 years—it has been a long time. When my family first immigrated to New York from Panama, we lived in Bed-Stuy for two years. And I spent about 20 years in Park Slope. But I moved to Clinton Hill when I was about 29–30 years old. My mother, brother, sister-in-law—we bought a brownstone.

For how much?
Oh, about $40,000. You could have gotten two houses for $20,000 at that time depending on the block; people were giving them away. Now people come by the house or call us up, ask if we are selling. I tell them, if you want it give me $90 million. But the thing is, black and Hispanics in the neighborhood have been encouraged to say no. Otherwise we would all be getting pushed out of the neighborhood. But of course, when we first moved in, it was different times. I remember Myrtle Avenue when no one wanted to walk on it.

Do you think people feel safer now?
They do. The thing is, they feel safer because of the renovations, the changes that have taken place, the fact that there is security around. But the neighborhood declined because people had moved to the suburbs to live. There wasn’t a variety of restaurants and things like that, that you have now around Clinton Hill and Fort Greene.

It has always been a family place though, very family oriented. Before I moved here, I used to come because I had a friend here. We used to go party, it was the 1960s, we would cross over the park and party. There was a church, St. Edwards, and they had dances, and we used to go dancing. I used to walk a lot on Fulton Street, check everything out. I had a job as a proof reader at one point, and we had the late shift which ended at 2am, and when people were leaving, everyone was trying to get taxis back home because there was nothing going on in Clinton Hill and no way to get home.

What about the subway system?
The train stop was there, but it would close. When John Lindsay was mayor the subway stations remained open. But after that they started closing them earlier, and the Clinton/Washington stop would close at about 10–11pm. Everyone knew it was about the neighborhood around the stations. It wasn’t a trendy place so the MTA would do it, close the gates. But once the area started coming back up the subway exits would be open. I remember when the G was not a good train, coming from Queens, that was a bad train.

Do you ever see tension between the old residents and the new?
You don’t get overt tension, but you get under the breath tension. It isn’t racial; people who are white who have lived here for a long time have the same feelings as the long-time black or Hispanic residents. It is more about the neighborhood than it is about race or money. It is “who are these people coming in thinking they are Columbus just discovering a new world?” That is what you get, a general feeling from the people who have lived here for 40–50 years. They want to preserve what is here and there were moments where the banks were screwing with the owners, purposefully changed the value of things, so residents who were already here got mad. I know people who were pushed out because of rent prices.

How about your neighbors?
We are now the oldest on my side of the block. We are the oldest residents. Because most of the people either died and their children sold their homes. But I like my neighbors; the neighborhood feeling is still there. Even though it was a different world when we first came here.

Would you ever consider moving?
No, never.

What is the biggest change you’ve seen?
Well, you see the buildings come down and the style evolve. Restaurants came in, which changed everything. Now, South Portland Ave., between Lafayette and Dekalb, feels like you are on 72nd Street and Amsterdam Ave! They put that Edward Snowden statue in Fort Greene Park—40 years ago, they never would have done that. Who would have ever thought artists would do that there? And now the Atlantic Center is there, back in 1952, the Dodgers were thinking of taking that space for a stadium, but the deal couldn’t be worked out. Imagine if that had happened?

What about spaces that you like?
BAM I like. I am thinking of becoming a member of their film society. The Barclays Center, we’ll see. I haven’t decided yet. The thing is, I remember that area before it came; the area was Hispanic on one side, Italian on another side. Everything over there was very different.

Are there places that you miss?
Where The Runner is, there used to be an Italian restaurant called Venice. I miss that. But I like The Runner so that is okay. The old Brooklyn Navy Yard, on Fulton and on Nostrand, there was an old jazz club, I miss those. That’s long gone.

Any restaurants that stood the test of time that you recommend?
I recommend Madiba, because it is authentic and real. A restaurant that is both cultural and different, it is unique. I like the seafood biryani. It is like paella. The other one I like is The General Greene. I like their breakfast, their brunch. I also like Chez Oskar. They do all you can eat mussels that are very good. Scopello has been in Fort Greene for about 10 years; that is a good Italian restaurant.

Where would you grab a Brooklyn slice?
Mario’s Pizzeria, there are two locations. They have a good meatball sandwich, too. The man who owns the one on Waverly has been in that business for well over 20 years now and is a hard working person.

How about for a drink?
Hoja Santa has a very good happy hour and Mexican food. It is a nice place, and they are very accommodating. A place that is very interesting is Frank’s Cocktail Lounge. They have jazz on the weekends, and have been here since 1954. They have seen the bad times and the good times.

How about places to listen to music?
Aside from Frank’s, there is a famous jazz spot in Bed Stuy, on the weekends there is this lady who has parlor jazz. 107 Macon Street inside a brownstone.

What about shopping?
There is a little store, Feliz it is very cute. She has little trinkets and souvenirs. The girl who runs it is very nice.

You give walking tours to people visiting. Where do you take them?
We start at BAM. I always take them to Fort Greene Park. I show them the Prison Ship Martyrs Monument, which honors 11,500 prisoners who died in captivity during the Revolutionary War.

Any events or specific activities you would send people to check out in Clinton Hill?
I would tell them to do a house tour for sure. If they like jazz, be sure to check out local jazz places. To go to Fort Greene Park. Now people hang out in the park, but at one time, no one wanted to.

So do you feel like you enjoy the area as much as you always did?
I do. I am always collecting historic things, gathering facts. I think I will always be interested in Brooklyn. What I like is to look at how ethnic groups meet, and how they get together and get along, and this is an amazing area to examine that. It is an interesting neighborhood and an interesting time. I think that there is still that kinship here, a connection for the old residents, and the newcomers bring their families and new kinship occurs. I always say I would love to live another 50 years and see what happens. I predict that in 30 years the area will go down again, and everyone who wants to can live in one of these new fancy big condos. But for now, I am just looking forward to spring.