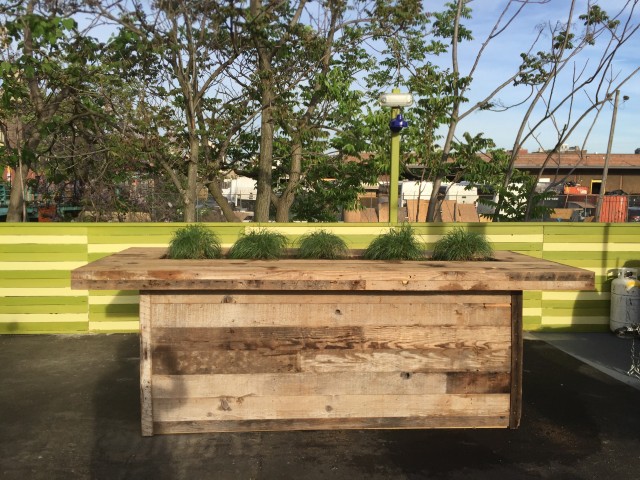 Pig Beach, opening on the banks of the beautiful Gowanus Canal, opens to the public on Tuesday. Photo: Pig Beach

One of our favorite times of year is when the weather warms up enough to sip a cold drink, preferably alcoholic, at an outdoor bar. Over the years we’ve shared our appreciation for these al fresco drinking establishments through extensive guides, filled with recommendations for everyone from beer nerds to those seeking room for 10 of your closest friends. This year, we’re just focusing on the brand-new spots we’re excited to hit up all summer. 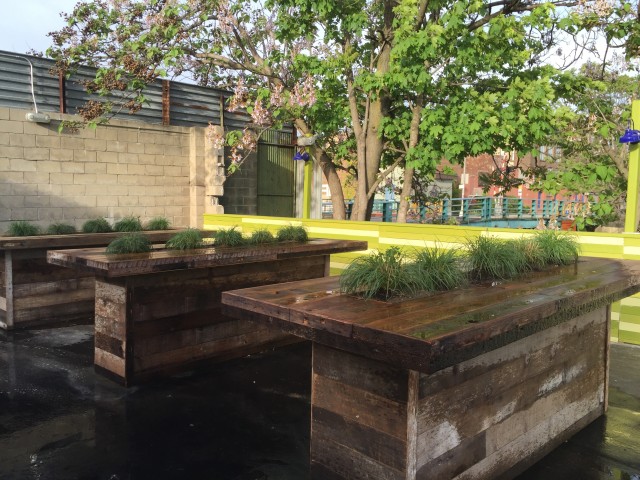 Gowanus Yacht Club was the first bar to originate the concept of a seasonal outdoor bar in Brooklyn (that we know of) but this year a few new places are pursuing the same strategy, like Pig Beach (originally called Swan Dive), which is not only actually in Gowanus, but right on the Gowanus Canal overlooking the Union St. bridge. You may still think of it as the toxic riviera, but there are actual, living, breathing swans that paddle past this summer bar, which opens June 3. There’ll be a full bar and food, like burgers and brisket tacos, prepared by Salty Rinse BBQ, a decorated pit crew that just placed second in the whole hog division in Memphis’s world BBQ competition. The best news is that it will be open every day except Mondays till October 31.—Nicole Davis 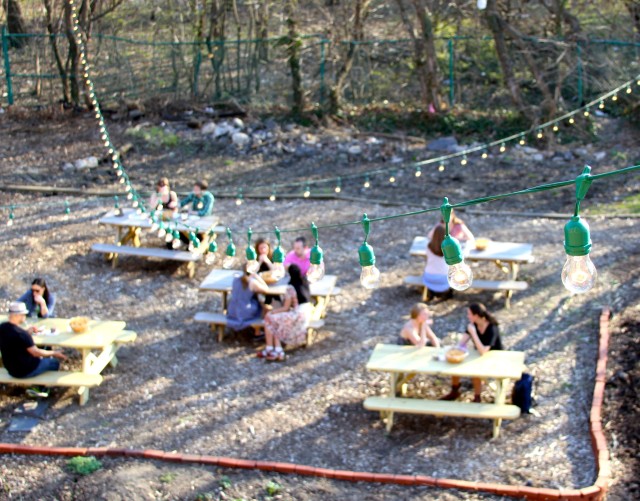 If you thought the prime season for whiskey cocktails was winter, when we are awash with Old Fashioneds and Manhattans, the grain garden at Kings County Distillery will extend your dark liquor drinking habits through Labor Day weekend. In their 70-seat space in the Navy Yard, you’ll be able to enjoy John Collins, moonshine punch, mint juleps and flights of whiskey on Fridays from 4-10pm and Saturdays from 2-10pm, weather permitting. Their farm distillery license won’t allow for other boozy beverages, but you can look forward to pairing your local distillate with food from a rotating cast of vendors—this weekend it’s BBQ courtesy of Tim Laurson of Smoak. Find out future food options and weather reports by following @kcdtastingroom for updates.—N.D.

Like Rockaway Taco (now Tacoway Beach) and the Smorgasburg opening this weekend in Coney Island, the food options at Riis Park Beach Bazaar are just the latest to transform the NYC beach-going experience, historically associated with cheese fries and crappy beers, into an artisanal paradise. Along with permanent food vendors like Fletcher’s BBQ and Ample Hill Creamery throughout the week, weekends will be filled with pop-up food vendors, merchants hawking vintage and crafty wares and an array of beauty technicians who will do your nails, your hair, or give you a tattoo, which you may finally be tempted to do after visiting one of the many “BarZaars” along the boardwalk. Take your pick from Sixpoint, Smuttynose and other craft beers, frozen margaritas and Arnold Palmers made with Kelvin Slush, Hendricks Coolers and Pump House wines. All are in the $6 to $8 price range, which seems reasonable depending on the size of their plastic cups. The food and drink will be available daily, 11am-9pm, starting tomorrow. —N.D. 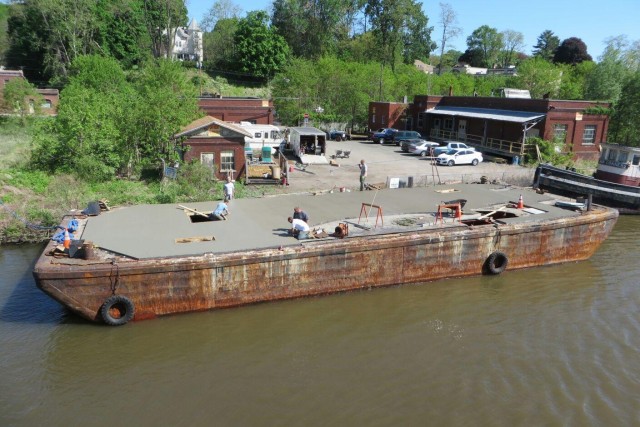 The name says it all, right? A barge, in Brooklyn, where you can drink on the water. Who wouldn’t want this? Apparently, the Community Board 1 State Liquor Authority committee has some mixed feelings about the plans for a floating barge to dock near Transmitter Park in Greenpoint and serve Barg-elatas (their spin on Micheladas) and Greenpoint Mules all summer. Regardless, owner Will Drawbridge and his crew are going full steam ahead, and finishing work on the barge in Kingston, NY. Following a new liquor license review in a few weeks—the owners feel confident that they’ll get approved—the barge is slated to open at its new home by mid-June. Should they not get their license this go around, they’ll still serve food from a summery menu that includes kale salad, burgers and skirt steak, and provide the waterfront programming they already have planned like kayaking, community sailing, paddle boarding, free fishing clinics and visits from historic ships. Let’s hope we can catch a buzz aboard the barge, too. They’ll be updating their Facebook page with the status of their approval. —N.D. 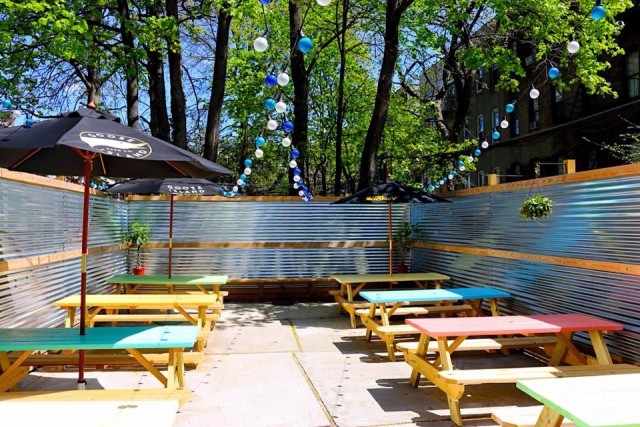 The interior of the Crown Heights newcomer is awesome in that it doesn’t aspire to be anything more than a solid neighborhood bar. There are simple cocktails with no frou-frou ingredients (the house drink has just Jameson, bitters and lime) and a low-key décor featuring cafeteria-style floors matched with old-fashioned bar stools, making this simple spot feel like it could be a Main Street bar in Anytown, USA (in a good way). But the real star here is the very spacious backyard, a fenced-off area with eight picnic tables, umbrellas, shady trees, and a just-completed wall mural by local artist Stephanie Costello. To welcome in outdoor drinking weather, they’re amping up the spirits selection with $6 “Sloe Cones” – basically boozy snow cones—like the Sloelita (sloe gin and cherry) or the Hierba Buena (mezcal, sweet lime and Tabasco) and “Smutt Buckets” of Smuttynose and Vunderbar beers, any five for $20. Draft beers come in thoughtfully frosted mugs and twinkling strings of lights make this a solid spot for evening outdoor drinking—a welcome development in this southern stretch of Crown Heights, not yet as bar-rich as the neighborhood north of Eastern Parkway.—Brendan Spiegel 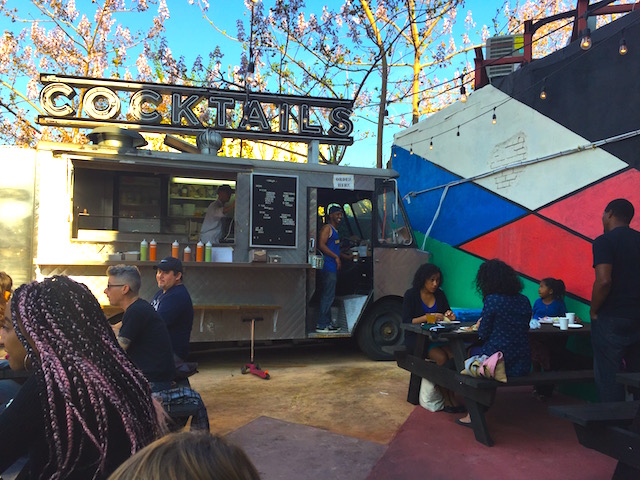 At Chilo’s you order drinks inside, and take them out back beside a taco truck– it’s worth visiting just for the carnitas and tostadas alone. Photo: Brooklyn Based

This grungy new spot brings a chilled-out vibe to the Bed-Stuy/Clinton Hill border, along with a sizable backyard and a permanent Mexican food truck. There’s a solid lineup of tacos—the crispy fried fish version is a standout—and tostadas—the veggie option, layered in nopales (cactus) and avocado is another winner. The menu avoids anything too hipster-kimchi-fusion and tacos start at $2.50. Don’t miss the array of spicy salsas to layer on top. There’s also a lengthy tequila and mezcal menu, along with frozen margaritas and more serious drinks like the Border Ring (Rittenhouse rye, bitters and chipotle/allspice simple syrup). Chilo’s is open until four am on the weekends and so far has a quiet, not-too-crowded vibe, but with warm weather finally here, we don’t see that lasting too long.—B.S. 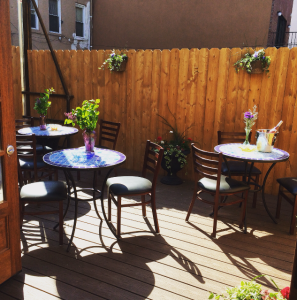 Co-owned by a concert promoter and boasting Mumford & Sons’ Ben Lovett as an investor, this rocking new Gowanus spot promises to host after-parties for touring bands when they hit NYC. (It’s not far from the Bell House and several other music spots; the Mumford lads have already stopped by.) The tiny backyard space holds just a few small tables, but it’s a lovely spot to take a step back from the party-hearty vibe, or relax earlier on with one of many local craft beers like the Captain Lawrence Kolsch or Brooklyn Brewery’s ½ Ale (a solid, low-alcohol saison for day-drinking sessions)—perhaps after popping into one of the increasing number of great restaurants along this stretch of Gowanus, including Littleneck, The Pines, Runner & Stone, and Baba’s Pierogies.—B.S.