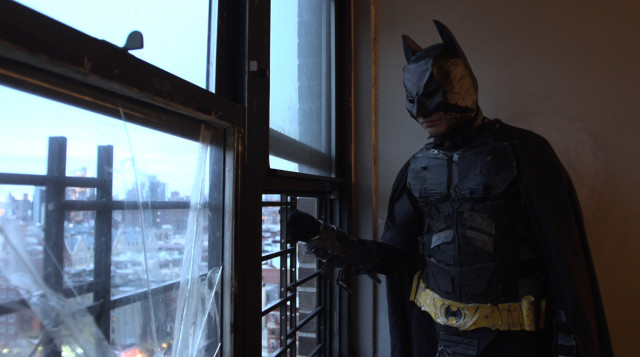 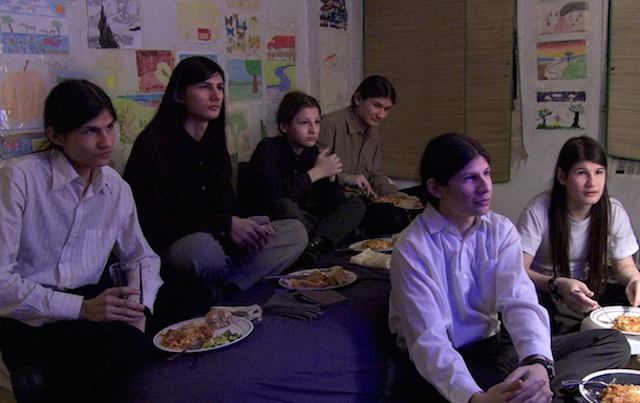 Every once in a while, a great story comes by and smacks you in the face. For Crystal Moselle, that happened just a few years ago on First Avenue, when a group of six young boys with Rapunzel-length hair ran right past her. Crystal, blessed with a healthy lack of boundaries, went up to the boys and started asking them questions. She discovered a couple of interesting facts—the boys loved movies, were interested in making their own—before one of them casually revealed that oh yeah, all six of them had spent the past 20 years of their lives locked in a tiny NYCHA apartment with over 1,000 DVDs, a disabled sister, and an oppressive Hare Krishna rock star dad. What was her favorite movie?

Needless to say, lifelong incarceration is “kind of” a dramatic reveal, so Moselle followed up, and kept listening. Years later, out came Wolfpack, the director’s 90-minute investigation into the lives of the Angulo boys. You simply don’t get a better premise than Wolfpack, because if there’s one thing our culture loves, it’s children-in-home-prison stories. Remember 1987’s Flowers in the Attic? (Please tell me you don’t. It’s atrocious.) Or seasons 1-1 million of  Law & Order SVU? Wolfpack is the latest iteration of a genre we are all ashamed to admit that we love, even as we wonder—why the hell do we like it?

Maybe part of the reason we’re so obsessed with these narratives is because of the size of their emotional spectrums: brutal abandonment at one end, empowerment at the other. Left to themselves, the resilient Angulo brothers build a brilliant world entirely of their own imagination. For all their years spent locked in their tiny Lower East Side apartment, the Angulo brothers never left more than a dozen or so times. Most of what they know about modern life comes through the thousand of movies their parents let them watch—Reservoir Dogs, Pulp Fiction, Batman. The boys act out scenes from their favorite films, then direct fantastical new ones in made-up accents. School, the local bodega, the funny neighbor aren’t there to entertain them. To feel alive in this world, they can’t depend on anyone but themselves.

Wolfpack could have easily become a sick and sloppy exercise in voyeurism, but Moselle lets her storytellers tell their stories. The Angulo brothers are insightful, articulate, and warm. They know they’ve lost parts of their childhood, but they haven’t given up hope for their futures. Their personalities are a testament both to their fortitude and the supportive factors in their abusive environment that moralistic Americans might be too afraid to see.

Our culture loves nothing more than shaming our “crazy moms” and “bad homes.” But neglect doesn’t just come from “bad parents.” That’s too easy a target. Trauma is institutional. The director spends a bit of the movie interviewing both parents, and it soon becomes clear that the father is responsible for keeping the kids practically incarcerated. He’s highly paranoid, as well as an alcoholic, and something of an abuser. The mother is aware of some of the abuse, but seems incapable of stopping it. But Moselle doesn’t demonize anyone in this story. While she doesn’t hide the neglect, she makes sure to show there is love in the Angulo home, too. The Angulos aren’t a freak show—they’re a family.

Wolfpack sensitively explores familial pain, but none of this justifies putting a child under house arrest. And while Moselle is busy asking the brothers for their side of their story, she fails to question anyone outside the home. How is it that these children—who’ve been so clearly abused for the past two decades—never once went into foster care? Why did the state miss this? Does New York not consider isolation, violence? While the circumstances are in many ways different, think of Kalief Browder at Riker’s Island. Why is it that our culture doesn’t recognize socialization as both a right, and a need?

Moselle worked so hard to tell the boys’ stories, but in doing so, she barely touched upon the bigger one. It’s a question of ethics, but also of boundaries, the size of a storyteller’s lens. Close-up stories reveal big-human feelings. Zoomed-out narratives can feel dissociated, cold and political. I just wish the director had spent more time investigating some external variables—how she got the family to trust her, how the city permitted this neglect—instead of spending so much time, zoomed in.

All complaints aside, it’s great to actually finish a documentary review, and write: “Guess what? Now everyone’s doing great!” Earlier this week, The New York Times posted a huge story about life post-Wolfpack for the Angulo boys. All of the brothers, who are in their late teens and 20s, now roam freely in the city, one has found his own apartment, and many hold actual jobs. It’s a credit both to their enormous intelligence and hard-won resilience, but also to the filmmaker’s decision not to turn the Angulo family into a tragic spectacle or carnival slideshow. She lets the boys be tender and cruel, smart and creative, and deeply, deeply human.

The Wolfpack opens tomorrow, June 12, at Landmark Sunshine Cinemas on the Lower East Side and at Elinor Bunin Munroe Film Center at Lincoln Center.