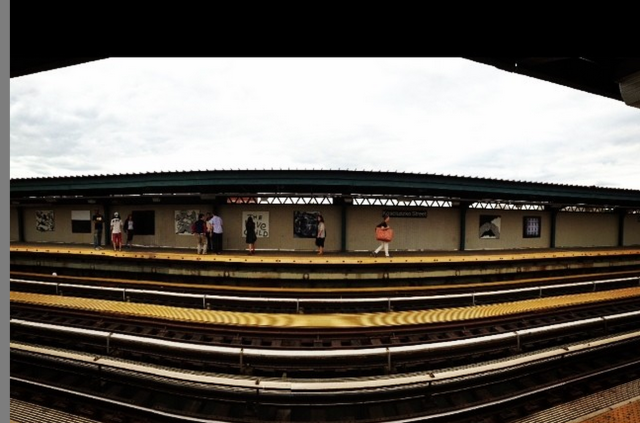 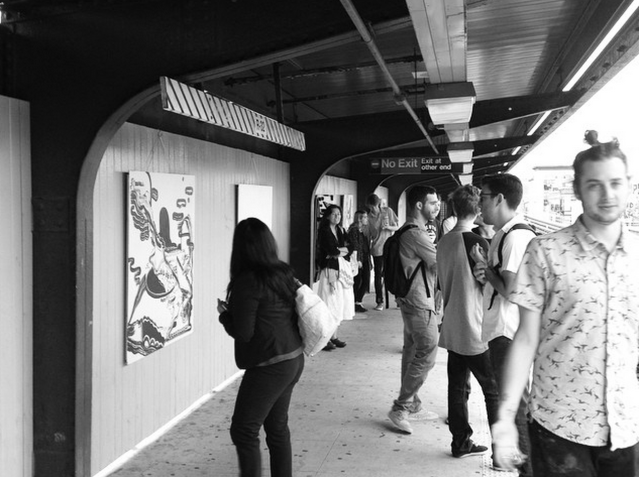 If you threw a mariachi band, an “It’s showtime!” crew, and a street preacher into the same subway car, you would have a proper spectacle. If you step onto the platform at the J train Kosciusko stop this Friday evening you’ll witness something just as frenetic, but likely more beautiful.

Brooklyn arts collective Apostrophe is back with its second Subway Show. From 6-8pm, the work of 14 visual artists will be on display on the platform. Folk-rock band Bandits On The Run and hip-hop artist Salomon Faye will provide music for the “gallery opening,” stand-up comic Dan Rosen will be working the crowd, and Superette Cold Brew will provide refreshments.

At the first iteration of Subway Show, last August, the kaleidoscope of mediums engendered a pleasantly disorienting effect. Stuart McAlpine, who was taking the J train that day, said, “I had stumbled into an art show and was immediately consumed by the energy and community created by the artists and crowd of people that appeared to have ignored the fact that the train had just come and left the station.”

Apostrophe founders, brothers Sei and Ki Smith, designed the guerrilla show to merge “the aesthetic refinement of a gallery with the spontaneity of street art.” Since 2012 Apostrophe has staged shows in similar venue- and format-bending fashion. Before the cops shut down the venue, Apostrophe ran a gallery-cum-concert space in Bushwick. Metal bands and EDM music would hit the stage in the same evening, with a formal introduction of artists sandwiched in between.

Committed to circumventing New York’s exclusive gallery structure, the Smith brothers create art shows that bring art directly to the public. The quietly confrontational approach means that Apostrophe events—like the Subway Show—are pieces of performance art in their own right. “Apostrophe’s” goal is to momentarily disrupt the collective isolation of people in transit, and allow the people on the platform to find a common curiosity in the fine art hanging on the station’s walls,” says Ki.

Subway Show can be put up and taken down in five minutes and despite Mayor de Blasio’s street performance crack-down, last year’s show went off without a hitch. Ki and Sei use S-hooks, like you might use to hang pots and pans with in the kitchen, to display the art. Because the work is not adhered to anything, Ki says the show breaks no property defacement laws.

Staging Subway Show at the J Kosciusko stop was a strategic decision. Ki says because the stop is above ground natural light illuminates the art. Phone service allows for social media engagement. Ki also said that the Kosciusko stop is in striking range of the city, but deep enough into Brooklyn that authorities “don’t bring too much heat.” Also, no posters hang on the platform walls, making the stop an ideal canvas.

“This is more than a pop-up art show to be seen and forgotten,” said Sei. “This is an experience: an acid trip you’ll feel the residue of the next morning. Apostrophe’s Subway Show will change the way you think about art as an observer.”