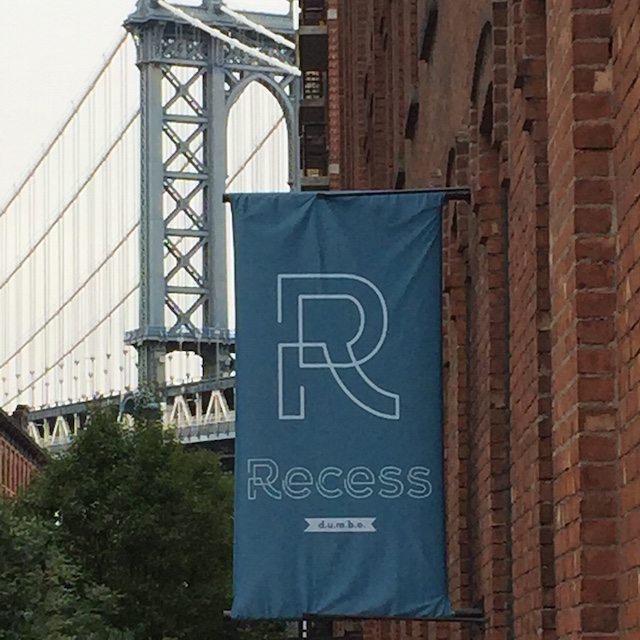 Stuck in the city for the summer? No sweat! Be one of the first to sign your kids up for Recess, a new playspace in Dumbo, opening on June 22nd. Photo: Meredith Craig de Pietro

Imagine for a second an architecturally airy space for you and your children to hang out as long as you want. When you enter, you are greeted by name, and your stroller is parked in an organized lot. There’s ample seating for you and your kids to sit down for a moment and peel off sneakers and coats, without people stepping on you. Your kids are excited for the multi-leveled play structures designed by an upscale furniture designer, while you peruse the table of complimentary, healthy snacks and sip on a refreshing mint cucumber water. There’s even an on-site sitter you could call upon to watch your child while you step out for a couple hours. In a city that doesn’t lack for indoor play areas, Recess, which opens this Monday, June 22, at 81 Washington Street in Dumbo, is a playspace that covers every imaginable base.

Co-owners Alexa Englander, the mother of a four- and a two-year-old, with a baby due in October, and Caroline Pardo, mother to two 5-year-old twins, are Dumbo residents who know first-hand the lack of neighborhood venues. As parents, they wanted a space that offers convenience–like open play available all day instead of just the usual 45-minute slots–and flexibility for people to either pay a membership or a one-time drop-in fee, in a space that Brooklyn parents and their kids will actually want to spend time in.

The price of membership provides unlimited playtime for the kids in a space that has slides, ladders, climbing webbing, a tire swing, a fireman’s pole and a chill out loft, plus discounts on birthday parties and classes such as chess, capoeira, and ballet, which are held in a separate room from the playspace so parents of children of differing ages and interests will still be entertained.

But the most unique offerings at Recess are the perks for parents. For members caught last minute without a babysitter, Recess will watch up to two children for up to two hours. Additionally, the kids can look forward to Friday night parties with Story Pirates, or weekend movie nights, while the parents can finally indulge in a date night. Best of all, you can stay as long or as little as you’d like–without having to worry about open play being over while you are still getting the kids out the apartment door. I spoke to its founders to learn more about its genesis and their plans. 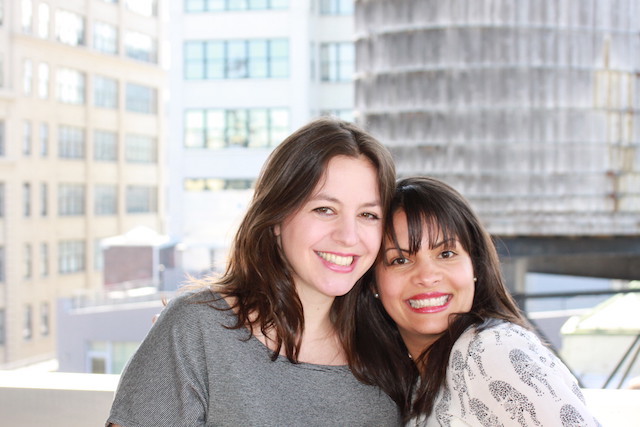 Alexa Englander and Caroline Pardo lamented the lack of playspaces in their hood, so they decided to build one that parents would like as much as the kids. Photo: Courtesy of Recess.

BB: What is the mission of Recess going to be?

Alexa Englander: The mission is to create a unique and special place for families near and far to come with their kids, where parents will also be happy and comfortable. Also we want to present something different than what other places are showing. The fact that we are in Dumbo, which is an architectural and artistic neighborhood, we want [Recess] to fit in with the aesthetic of the neighborhood.

Caroline Pardo: The idea was not, “Oh–the neighborhood needs a playspace, let’s just give them a playspace.” We’ve really, really put a lot of thought into this in terms of “Ok, where are we? We’re in Dumbo. So who’s our market? Who are the parents? What do they like?” We’ve really made sure that this playspace fit the neighborhood, and we were not just opening our doors and putting in mats for kids to run around. We wanted to create an experience. We wanted to create a culture where parents come and want to be here. 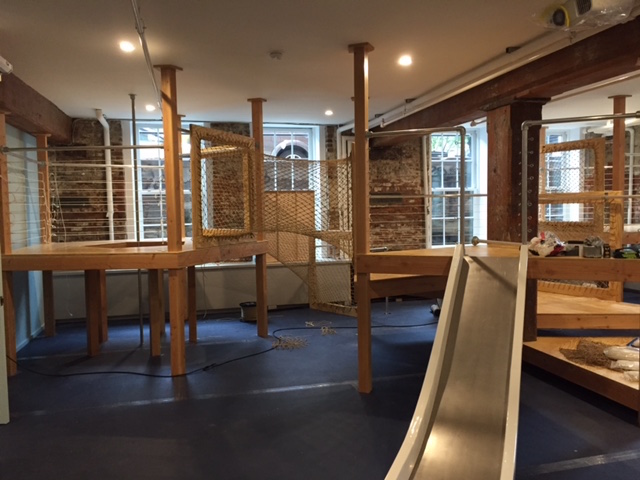 A peek inside Recess, where the finishing touches are still being put on its play structures. Photo: Recess

BB: How long have you been working towards the opening of this space?

CP: It’s been about two and a half years now. AE: We met in the playroom of our building after Hurricane Sandy when no one had anything to do because there was no power. CP: Living here [in Dumbo] we realized that there isn’t anywhere except for the parks to take the kids. I had been thinking about it for a while, and then I met Alexa and thought maybe we should do it since no one else has.

BB: Plus, you’ve both been working on this while holding other very demanding jobs!

BB: Opening a playspace seems like an idea that many parents might jokingly bat around, but how did you realize you were capable of actually doing this?

CP: If I can be a mom of twin boys with high energy who are constantly on the move, I can do anything. AE: For me too, being a mother has given me a lot of confidence in my professional life and my relationships with people. My mother said to me, “Why do you feel the need to do this?” And I said, “If I don’t do this, someone else is going to do it, and why shouldn’t it be me?” You see people doing amazing things all over the place and I know that I’m capable and I knew I had found the right partner–it was an instant match. People are successful because they take risks, and I didn’t want to live my life feeling I didn’t take a risk.

BB: How did you come up with the name Recess?

AE: We were brainstorming and were all over the map with the names. It was kind of a Eureka moment when Caroline was like “How about Recess?” and I loved it immediately. Once somebody threw out the right name, it was a very easy decision to make. I felt there was a lot we could do with the name Recess. Kids love Recess. CP: Parents know Recess. AE: Technology changes, computers in school, everything is evolving, but kids still have recess.

BB: What are some of the classes we can expect to see on offer?

AE: We’re excited about Capoeira, with Brooklyn Capoeira. Our yoga teacher is a certified Karma Kids yoga teacher, out ballet teacher is a professional ballerina, and Child’s Play is really established.

BB: From conception to opening, this seems like it was a massive undertaking and a real passion project.

CP: We just needed the right space to come and it’s been full speed ahead. We already knew we were meant to be partners. We already knew we had the idea. We already knew what we wanted to do. It was just finding that space, getting that opportunity to make it come to life. We got this opportunity and now we’ve been running. AE: This has been a lot of work. But, I’ve always worked for somebody else, so this is the first time in my life that I’m working towards something that is my own. And it’s extremely motivating, and even the boring parts, I’m invested. We’re building something and it’s really a dream come true.