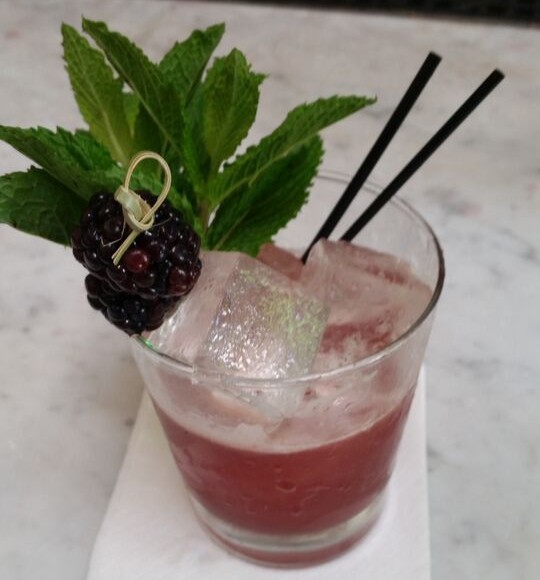 Well show you how to make The Boxer Beetle on the next page. Photo: Ellen Killoran

Ramona might look like it’s too elegant for a wild night out in Brooklyn, but co-owner Scott Schneider wants to be sure no one is intimidated by the cavernous, meticulously designed space and sophisticated cocktail program. “Even though it seems like a really classy place where you have to be on your best behavior, you totally don’t,” Schneider says. “It’s super fun.” Indeed, Ramona has quickly established itself as one of North Brooklyn’s most sought-after private party spots, and on any given weekend night you can expect to find an energetic crowd well past the witching hour.

Schneider opened Ramona in early 2014 with his brother Jay and Jay’s wife Natalka, after the team found success with Elsa in the East Village. Ramona was initially built as a sister bar to Elsa, but since Elsa closed in 2014 they’ve stayed focused on their Franklin Avenue spot.  We chatted with Schneider about the cocktail scene, Greenpoint and the secret lives of bartenders.

What drew you to Greenpoint? “Obviously we love the East Village but at one point we realized, ‘Wow, we all live in Brooklyn,’” Schneider says. “We’d been looking to open up a sister bar for a few years before we found this spot. We really liked Williamsburg but nothing was happening [as far as finding a space.] It just felt like the time was right for Greenpoint, and we liked this particular corner which is becoming really central. We thought it would be nice to get here on the earlier side.”

The design team Home–Greenpoint-based brothers, Evan and Oliver Haslegrave–created Ramona’s interior, which doesn’t have a single 90 degree angle. “Their first ever project was Elsa,” Schneider says. “And now it’s all come full circle.”

What is Ramona doing differently than other bars? “To set ourselves apart from other specialty cocktail bars, I usually have a requirement that any drink on the menu has at least one ingredient that’s made in-house. I guess it could be replicated but it would be hard,” Schneider says. But he avoids using the word “infusion” on the menu, even if it’s an accurate description, because he’d have to use it to describe almost every cocktail.

A lot of trends come and go in the cocktail world quickly–is there anything in particular you are seeing right now? “Frozen drinks have been around for awhile, but I think the idea of adapting a higher caliber cocktail to a frozen drink is something that’s fairly new, and I wasn’t sure if that was something we wanted to do. But once we got this big space, I thought well, we have all this room, we should get a few frozen machines and experiment. It ended up being the most fun thing about summer for us and our customers.”

What are people typically ordering when they come to Ramona?  “People really go for the spicy drinks,” Schneider says. “You kind of just keep going for it. People will drink three in a row, especially the Self Portrait. It’s really refreshing and has just a little bit of heat.” The most popular drinks right now at are the Self Portrait, Hotel Danger, and the Black Book, which came from Elsa, he says. Each one incorporates heat, in the form of habanero, chipotle and jalapeño, respectively.

Where do you go when you’re not working? I’ve been [in Greenpoint] for three years. I used to always go to Lulu’s, and I’m super bummed that it’s gone. But I like a lot of other places–I go to River Styx all the time for dinner. I like Alameda, I like Oak & Iron a lot. On the other side, I really like to go to Greenpoint Fish & Lobster Co. and there’s also a meat and cheese place called Greenpoint Cheese & Meat which we are going to start sourcing from.

When you go out, what’s your go-to drink? Pretty much all of us here, when we go out, we just drink Budweiser. By the time we’re done doing the menu the last thing we want is to taste more cocktails. I like to enjoy a good Old Fashioned once in a while, but mostly we’re drinking Buds and taking shots of whiskey.

On the next page, a recipe for Ramona’s Boxer Beetle…