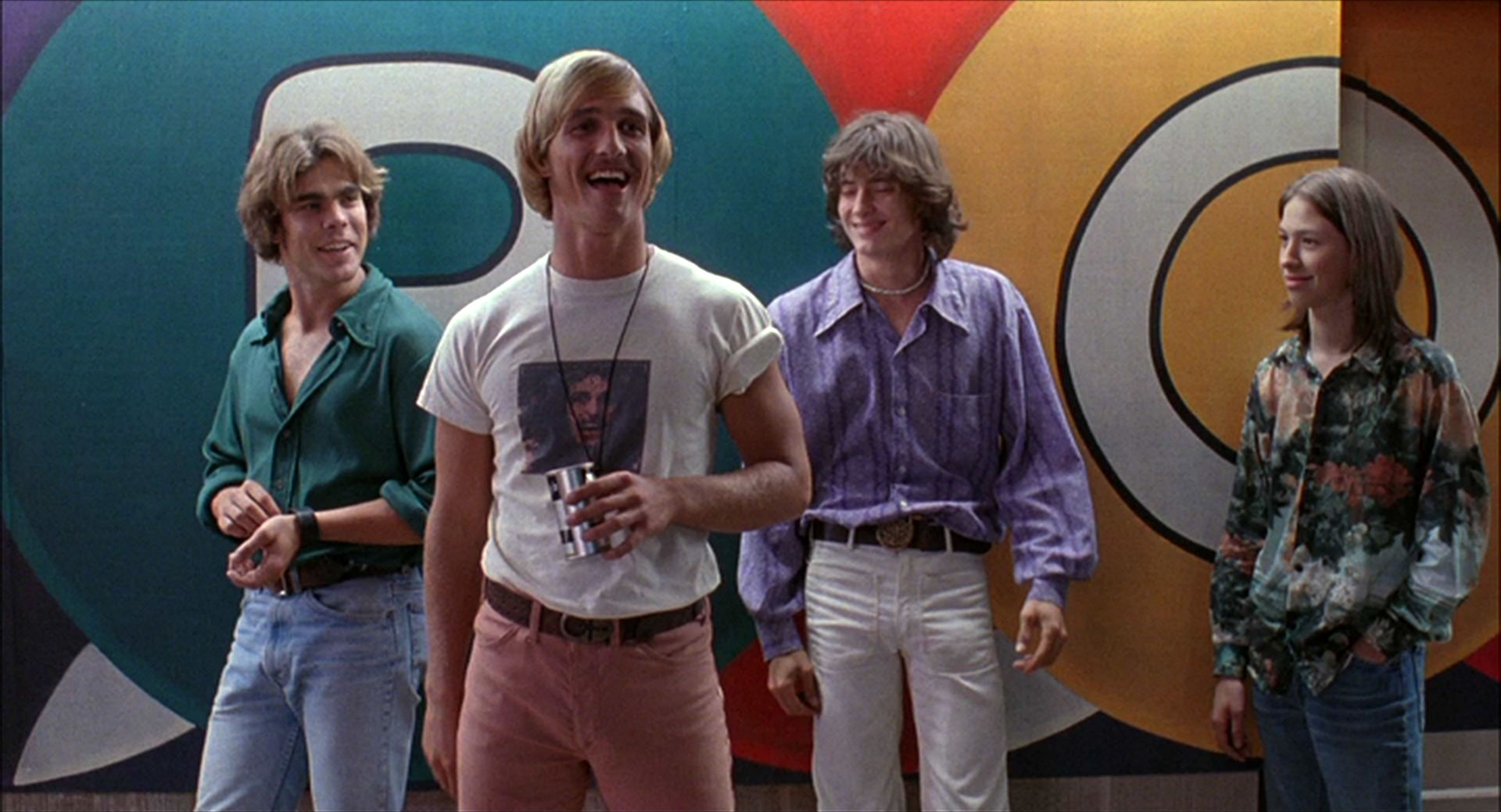 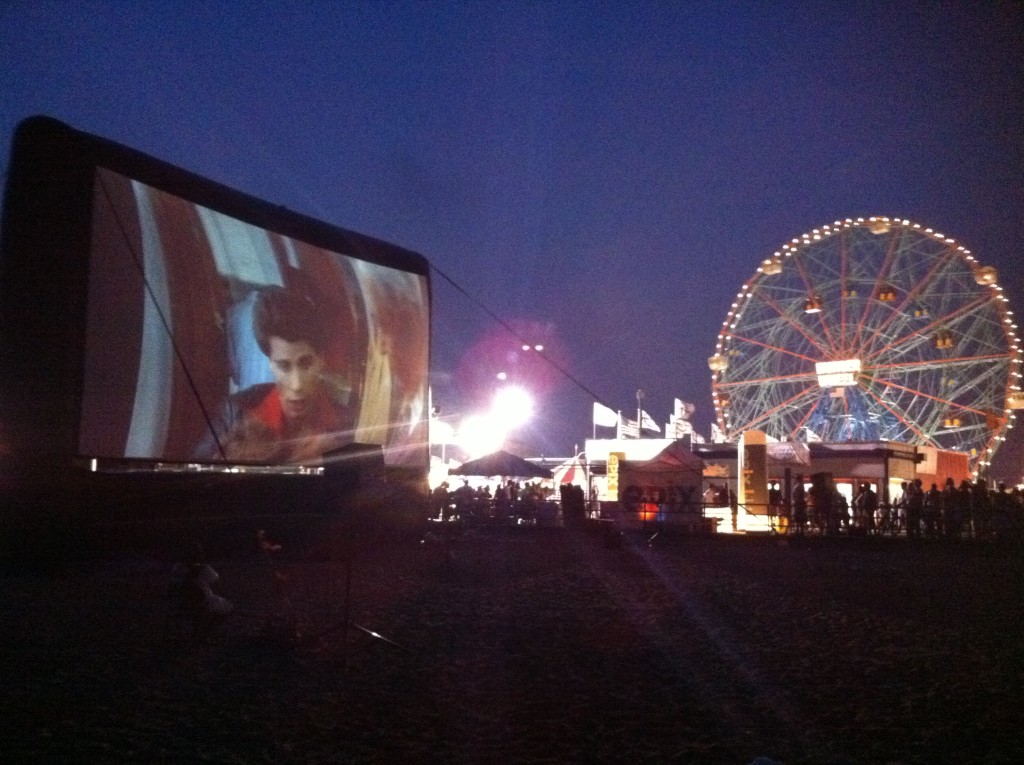 Ride the Wonder Wheel, eat a hot dog and catch a movie, all at Coney Island. Photo: NYEDC

One of the best parts of a summer spent in Brooklyn is the opportunity to while away a hot weeknight watching a classic movie on a big screen under the stars. Whether it’s an ‘80s comedy or a French art film, projected against the backdrop of the Manhattan skyline or within the summer camp-like atmosphere at McCarren Park, there’s something about lying on a blanket in the grass and watching a movie on a balmy night that will make you completely forget where you are. It’s the ultimate escape without actually going anywhere, for the price of a crappy bottle of wine, some snacks and maybe subway fare. And, for yet another year, it’s an option that’s available to you nearly every night of the week for all of July and August.

Now, back by popular demand (seriously, people actually emailed, which was awesome), our complete calendar of free outdoor movies in Brooklyn is here. Flip through and take note of the flicks you’re dying to see, and you can import them to your own GCal one-by-one or en masse. Line up a few friends and send some invites, and you’re already well on your way to a perfect summer evening.

Here’s a quick roundup of the different places you can catch an outdoor show sometime between now and this fall. Remember that all movies start at sundown, but you should plan to arrive earlier if you want good seats.

Monday Nights at Coney Island Flicks on the Beach: A miserable, sweltering summer night can be vastly improved by sitting in an ocean breeze for a few hours while a great movie plays on a 40-foot inflatable screen on the Coney Island Boardwalk. The year’s lineup of titles hits a lot of notes–between The Terminator, The Grand Budapest Hotel, The Goonies, Indiana Jones and the Temple of Doom, Big Hero 6, Mrs. Doubtfire, Guardians of the Galaxy, and a TDB selection, everyone will find something to be excited about. Although admission is free, remember to bring cash in case you want to take a spin on the Wonder Wheel or tuck into a Nathan’s hot dog.

Tuesday Nights at Red Hook Flicks: This is my not-so-secret favorite of all the spots that show outdoor movies every summer, because its location off Valentino Pier is remote enough to keep things intimate and low-key, but right on the water with a spectacular view of the sunset and the Statue of Liberty. Local restaurants take turns sponsoring the event, which means that you can buy movie snacks from the likes of Pok Pok and The Good Fork, and you can even bring your dog along if you’ve got a mellow canine who can keep quiet. Plus, who can argue with a lineup that includes Jurassic Park, Coming to America, Fantastic Mr. Fox, When We Were Kings, The Bad News Bears and Goodfellas? Get on your bike and head to Red Hook, and don’t forget to treat yourself to a Swingle before Steve’s closes at sundown.

Wednesday Nights at Summerscreen: The McCarren Park people really nailed it with this year’s schedule, which consists of Clueless, Wet Hot American Summer, Dirty Dancing, Dazed and Confused, Jurassic Park, and an Audience Choice screening that you can vote for here. Not a bad pick in the bunch, and the corner of North 12th and Bedford Streets is super convenient to the L train. Doors open at 6pm, and there will be food vendors and live music until the movie starts. 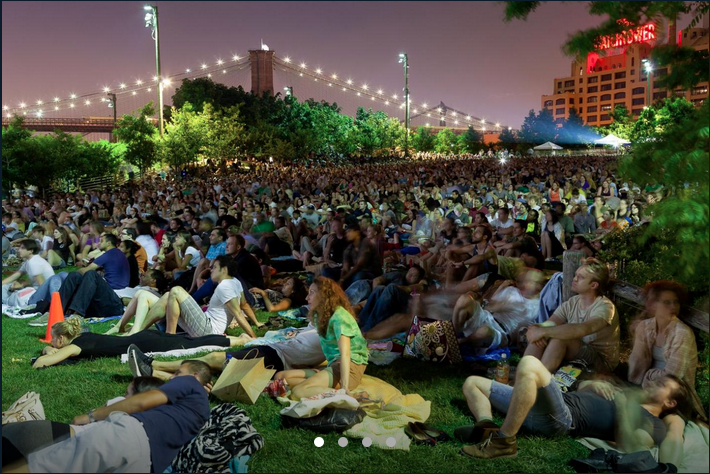 There’s a reason the summer movies at Brooklyn Bridge are so popular, the setting is awesome. Photo: Etienne Frossard

Thursday Nights at SyFy Movies with a View: One of my favorite nights of last summer was when a whole group of my friends gathered in Brooklyn Bridge Park to watch Sharknado with me and about a million other people. If the script and Tara Reid’s acting chops left a lot to be desired, the evening proved that sometimes the worst movies are the most fun to watch in this specific format. The sequel, Sharknado 2, is in the mix this year, along with High Noon, Attack the Block, Clue, Friday, Dr. Strangelove, Dazed and Confused, and Die Hard. It’s difficult to imagine a more picturesque setting to watch a movie in than this one, situated between the Brooklyn and Manhattan Bridges and a stunning view of the East River and the downtown skyline. This is a popular activity, though, drawing about 7,000 people per screening, so you’ll want to arrive early and stake out a patch of grass long before sundown. Pro-tip: DUMBO Wi-Fi is available here, so have a friend who works remotely and loves the outdoors stake out your spot early in the day.

Sunday Nights at Habana Outpost: Fort Greene’s friendly margarita, fish taco and elote emporium, Habana Outpost, projects movies onto a giant screen in its outdoor space starting in early May and running all the way through October. As always, they’ve selected a killer list of titles for your viewing pleasure, including Top Gun, Jaws, Footloose, The Usual Suspects, Little Shop of Horrors and The Lost Boys. Be forewarned that the takeout-style restaurant is cash only, and it can be hard to find a seat in the adjacent patio even on a normal night when they aren’t showing a movie.

In addition, several spots around the borough will have outdoor movies on a more sporadic basis throughout the summer. For instance, Bay Ridge’s Narrows Botanical Garden has Big Hero 6, Mars Attacks, a people’s choice selection, and Rocky Horror Picture Show on the books for a few Friday nights. Nitehawk Cinema and Buzzfeed have teamed up for outdoor screenings of two movies that turn 20 this year– Billy Madison and Mallrats–at 50 Kent Avenue on July 7 and Aug. 4. Films on the Green will bring two French films, La Derive and La Collectionneuse, to Transmitter Park on two Fridays in July, and on July 17, Celebrate Brooklyn! will show The Son of the Sheik, a silent movie, in the Prospect Park bandshell with a live orchestral accompaniment. Finally, we included only the few free Rooftop Films screenings in our calendar, but you should check their schedule to see all of the amazing outdoor movies they are planning to host on the roof at Industry City and elsewhere for $15 a ticket.