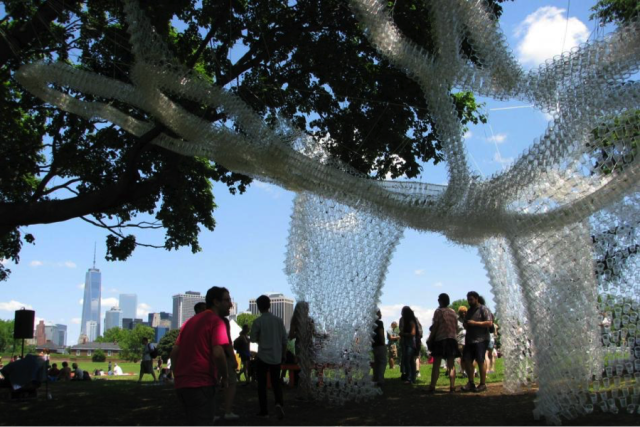 Despite its many charms, summer really makes you feel your lack of outdoor space if you’re not a New Yorker lucky enough to have regular access to a rooftop, backyard or deck. Our many amazing state and city parks, from Pelham Bay to the Highline to Marine Park, function as backyard, living room and release valve for the entire city, especially in summer when they offer everything from boating and archery lessons, to overnight camping and outdoor movies–or, simply a leafy green or sandy oasis from the heat of the city. A few of our favorite parks have made significant upgrades just in time for summer, or have other buzzy news to report. Here’s a rundown of what’s new in the green spaces near you.

One of the pavilions appearing this summer on Governors Island. Photo: govisland.com

Just west of Red Hook sits Governors Island, which has undergone serious revitalization over the course of the past few years, and with even more development in progress.

Summer Fun: What can’t you do on Governors Island in summer? Bike the miles of car-free paths, play mini-golf with the kids, eat burgers, steaks, ice cream and more at the Liggett Terrace Food Court in the island’s center, or learn urban farming in the Teaching Garden. That list merely skims the surface of the list of daily activities on the island this summer.

Other planned events include photography classes, the New York City Poetry Festival, the Transit Museum’s Vintage Bus Bash, a unicycle festival and public art. Be sure to check out the Billion Oyster Pavilion. This year’s winner of the annual City of Dreams design competition, the pavilion is an interactive event space constructed from the same materials that students at the Harbor School have been using to re-establish an oyster population in New York Harbor.

Future Attractions: The southern tip of the island will see four gigantic man-made rolling hills climb up to 70 feet high within the next year, and when visitors gain access to that portion of the park they will be privy to some of the best panoramic city views anywhere in the five boroughs. If you’re willing to take a hard-hat tour of the plot while it’s under construction, gather at the Liggett Hall Arch at 4:15pm on select dates throughout the summer. The hills represent the final development of the island’s new 30 acres of parkland.