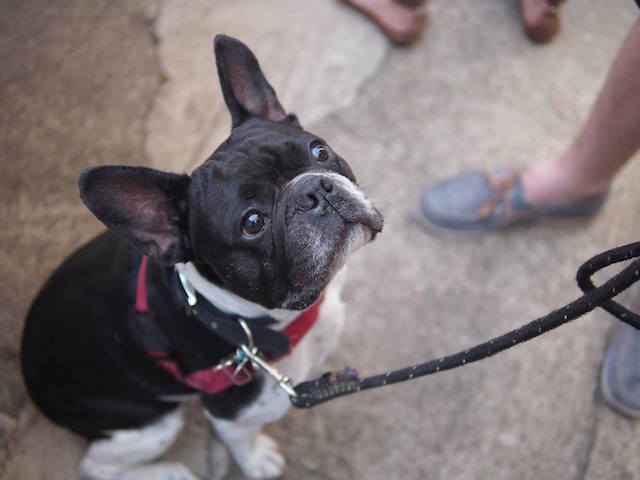 With the Fourth of July weekend behind us, summer is officially in full swing, and there’s so much to do around these parts that it can be hard to keep it all straight. Be sure to check out our post on awesome summer day trips, reads, concerts, movies, bars, eats and more to get a jumpstart on your plans for the next few months.

In the meantime, music buffs have a lot to choose from this week: Celebrate Brooklyn! is hosting free concerts by Punch Brothers on Thursday and The New Pornographers on Saturday. Also, the 11th annual Brooklyn Hip-Hop Festival starts today (July 8) with a full schedule of events celebrating hip-hop culture and its influence upon community building and social change, including panels, films, a culinary tour of Brooklyn, and an art gallery/beat showcase/dance off at Littlefield on Friday night. The main attraction, though, is Saturday’s Big Show at 50 Kent Ave. in Williamsburg, which boasts all-around amazing person Common as the headliner, as well as performances by Mobb Deep, Lion Babe, and a host of other legendary rap and hip-hop artists. The concert starts at 1pm and tickets are $50– be sure to grab one before it sells out.

On Saturday, as a precursor to Smith Street’s big Bastille Day extravaganza (see below), By Brooklyn is honoring French Independence Day with its 4th Annual French Bulldog Party at 3pm. Bring your favorite crazy-eared Frenchie (or any dog) and admission is just $10, which includes snacks and beer. Most importantly, all proceeds go to help the deserving pups at Badass Brooklyn Animal Rescue.

Wimbledon concludes on Sunday, and you can pay homage to all of that rigorous discipline and stupendous athletic prowess by stuffing your gullet at the Ice Cream Takedown from 2-5pm at The Royal Palms. Tickets are $20 and buying one means that you get to try all the competitors’ goods. Afterwards, walk it off with a trip to Red Hook, where you can check out open studios, live music, and dance performances at Second Sundays, Pioneer Works’ monthly arts showcase series, from 4-10pm.

We’ve got loads of other great stuff lined up too, so read on for tips on how to spend each day of the Ideal Week ahead of you: 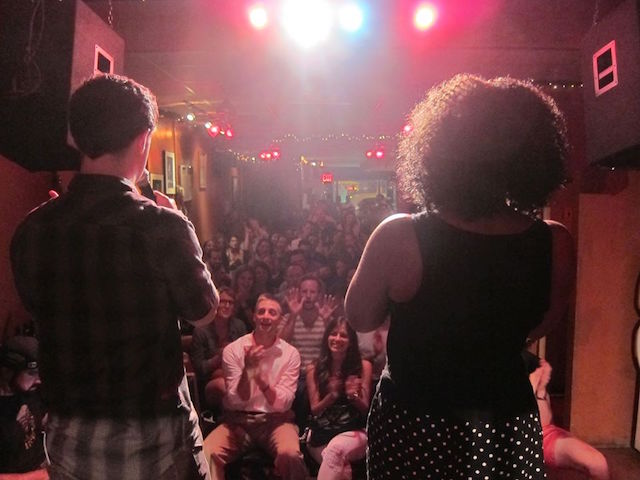 I’m constantly on the lookout for new weekly or monthly comedy shows, in part because I’m still mourning the demise of Hot Tub and Big Terrific, but mainly because I think that there’s nothing more fun than seeing a super talented, up-and-coming comic for a few bucks in an intimate, local setting just before he or she hits the big time. I was pretty psyched, then, to learn about It’s All Happening, a new show hosted by Brian Parise and Janelle James on the second Thursday of the month at Frank’s Cocktail Lounge in Fort Greene, which happens to be my favorite bar to grab a cheap beer after catching a movie at BAM. This lineup for this month’s second-ever show is great and includes Seaton Smith, Joe List, Simeon Goodson, Amber Nelson, and Jason Weems. The show starts at 8pm, and you should be sure to hit the ATM beforehand because there’s a $5 cover and the bar is cash only. –K.H. 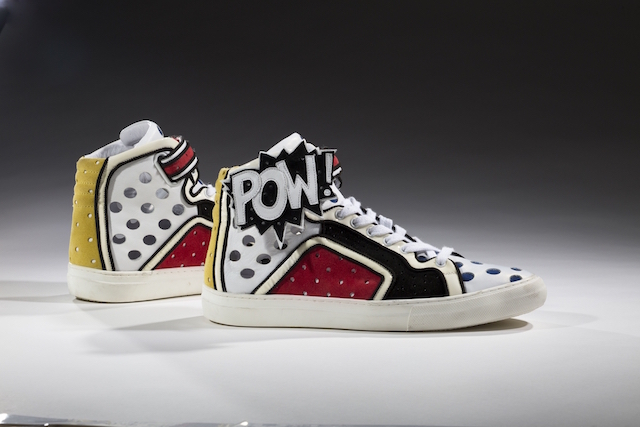 No matter where you fall in the Nike v. Adidas v. Puma v. Converse debate, if you’re a shoe enthusiast (or curious observer of footwear culture), head to the Brooklyn Museum this Friday for the official opening of The Rise of Sneaker Culture, a new exhibition that explores the sneaker’s evolution from rudimentary fitness shoe to urban icon and status symbol worn by billions of people around the world. Over 150 kicks will be on display, including an original Nike Air Force 1 (worth $1500), a pair of running sneaks from the 1860s, and lots of shoes, footage, and images that demonstrate the intersection between sneakers and hip-hop, graffiti, and basketball subcultures. The show runs through October 4, and while you’re at the museum you should also reserve some time for the second new exhibit opening on Friday, FAILE: Savage/Sacred Young Minds, which explores the complex relationship between consumerism, pop culture, street art, and fine art. –N.R. 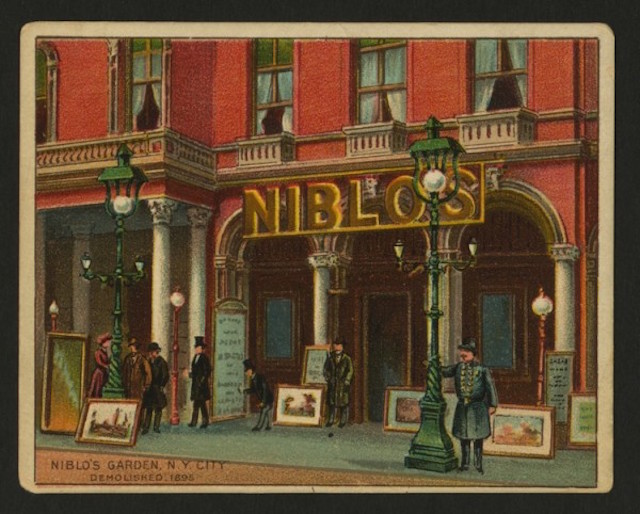 Forget the Roaring Twenties: On Saturday evening, Green-Wood Cemetery is going way back—to the 1860s, in fact—and everyone’s invited. In celebration of one of its most interesting residents, William Niblo, the cemetery is hosting an evening of entertainment that is a fitting tribute to the man who founded the storied Niblo’s Garden, a theatre in Soho that is credited with launching P.T. Barnum’s career and hosting the first piece of musical theatre as we know it today. Niblo’s grand mausoleum was built years before he died, and he often hosted picnics and entertainment there for family and friends– legend has it that he even stocked the nearby Crescent Water pond with goldfish! Starting at 7pm, you are invited to enjoy a sunset bring-your-own-picnic there, followed by 19th century games and performances by fire-eaters and contortionists from Bindlestiff Family Circus, one of the Hudson Valley’s premiere vaudeville and performing arts organizations. Niblo himself—or rather, Niblo expert and author Ben Feldman channeling Niblo—will be in attendance to get the party started. Tickets are $32 for Green-Wood and Brooklyn Historical Society members and $37 for non-members. –N.R. 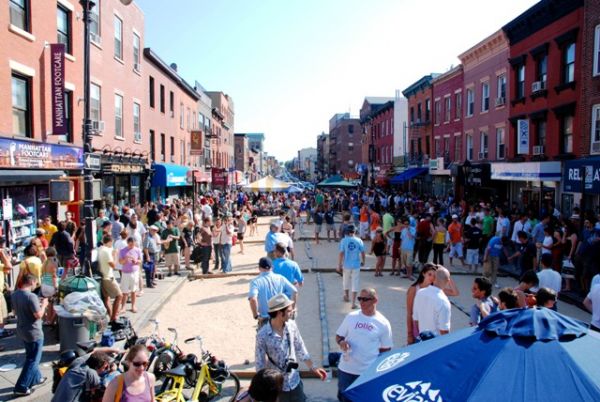 Smith Street will be closed and covered with sand on Saturday in honor of Bastille Day and the annual petanque tournament at Bar Tabac. Photo: Bar Tabac

BoCoCa is home to a large population of French expats, as well as an expanding cadre of French-owned cafes, bakeries, and other small businesses. It is no surprise, then, that the neighborhood hosts a raucous Bastille Day Party every year on the Sunday before the official holiday (which falls on July 14 this year), but did you know that it happens to be the world’s biggest Bastille Day Party outside of France? Head over to Smith Street between Bergen and Pacific starting at noon for a street fair par excellence, with snacks and drinks from local merchants and a 73-team petanque tournament at Bar Tabac. Vive la France! –K.H. 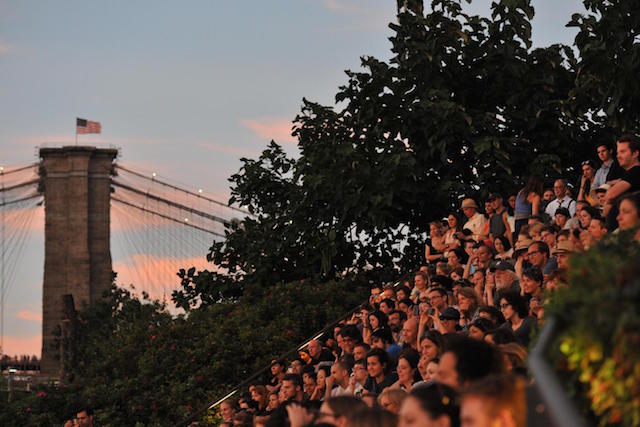 On Monday night, Greenlight Bookstore and Brooklyn Bridge Park are teaming up for a special outdoor edition of Greenlight’s Poetry Salon, featuring the work of some of the borough’s finest creative minds and an unrivaled view of the Manhattan skyline from the park’s Granite Prospect steps. Starting at 7pm, settle in for readings by Natalie Eilbert, author of Swan Feast and founding editor of The Atlas Review; Camoghne Felix, the poet behind Yolk and a Pushcart Prize nominee; editor and educator Ross Gay, author of Catalog of Unabashed Gratitude; and Fulbright Fellow and Boneshepards author Patrick Rosal. All authors will be on hand for a Q&A and book signings after the performance, and admission is free. The event is the second of six installments of Brooklyn Bridge Park’s beloved annual Books Beneath the Bridge literary series– check out the full summer schedule here. –N.R. 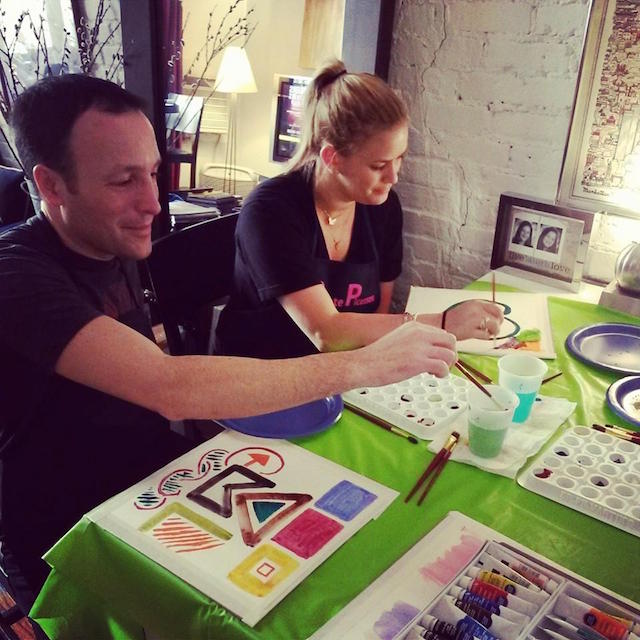 Maybe you aren’t destined for an MFA or your own juried gallery show, but that doesn’t mean you don’t have an inner artiste who needs to be indulged every once in a while! Flex that atrophying creative muscle at Watercolor & Wine Adult Paint Night, which takes place Tuesdays at Berg’n from 7-9pm. After a short demo of watercolor painting fundamentals by the people at Private Picassos, students will be given the time and materials necessary to create their own masterpieces, including some liquid courage to eliminate any pesky creative inhibitions. You get access to everything you need (including instruction, art supplies, interesting images & objects to inspire you, and two free drinks) for the price of a $50 ticket, and you can save $10 by signing up early. Happy painting, and please send us photos of your beautiful work at tips@brooklynbased.com so we can see it! –K.H. 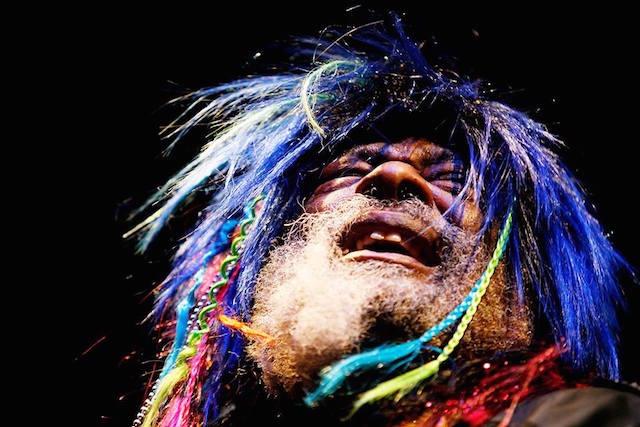 Wednesday night, this guy wants you to get funked up at a free concert in Queensbridge Park. Photo: George Clinton and Parliament Funkadelic

Just when we thought that this summer’s lineup of free outdoor events couldn’t possibly get any cooler, they hit us with this: George Clinton and Parliament Funkadelic performing live in Queensbridge Park on Wednesday– and it won’t cost a thing! The Rock and Roll Hall of Fame-inducted funk supergroup is enormous, both in its influence and the number of musicians involved, and this will definitely be a concert you won’t forget anytime soon (just ask Jeremy Piven’s character in P.C.U.). The show starts at 7pm, but you should plan to arrive as early as possible to ensure you have the best view possible when the roof gets torn off the sucker. –K.H.