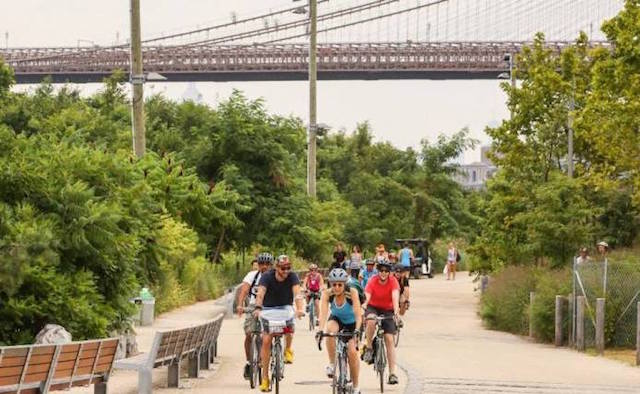 Cool off this weekend at a giant water gun fight in Central Park. Photo: Max Wei

I don’t know about you guys, but after enduring a week of downright tropical heat and humidity, I could really use a giant, old-fashioned water fight right about now. Luckily, an organization called Water Fight NYC is one step ahead of me, having planned a free, giant water gun shootout that is open to all  starting at 2pm on Saturday in Central Park’s Great Lawn. Once you dry off, Flavorpill is throwing a roller skating “Magic Hour” party at the LeFrak rink in Prospect Park on Saturday evening. For $14, you can skate for hours to tunes from DJs Metro Area and Free Magic, and you’ll have access to LeFrak’s full restaurant and bar, gelato parlor, and splash pad.

Interested in old cars? DUMBO is throwing its Second Annual Antique Car Rally on Anchorage Place between 10 and 4pm on Sunday. Twenty meticulously restored and maintained Ford Model As will be on display, along with live music from Jan Bell and the Maybelles starting at 1pm. For a totally car-free experience, the Bay Ridge Summer Stroll is back this Friday, and if you missed our Immersion last weekend it’s a chance to hit up a few of the restaurants and shops we missed.

As the Internet has been telling us for months, the new Wet Hot American Summer miniseries, which will be set as a prequel to the beloved and oft-quoted 2001 film starring pretty much everybody, debuts on Netflix on July 31. Real-life sisters Michelle Joni (whose name you might recognize from the glut of blog posts about the Brooklyn adult preschool she started) and Jessica Lapidos were both extras in the original cult comedy set at Camp Firewood, and although they were a little put out that no one asked them to bring their talents back for round two, they wasted no time in organizing their own Wet Hot Brooklyn Summer Talent Show at X Marks the Lot in Bushwick. On August 4 from 6pm to midnight, fans can get together for reenactments, stories from the set, free Wet Hot American wheat ale, a canned food drive (obviously), and a talent show featuring the weirdest and wildest talents in Brooklyn. We’re giving you a little lead time because a) costumes are mandatory, and b) if you want to enter the talent show as a contestant, you need to audition by posting a preview of your talent on Instagram by August 2 so you should get started.

If you have a soft spot for shellfish, you should treat yourself next Thursday to a serious surf and turf feast in the backyard of PDR, the private dining room of Naturally Delicious caterers. Lobster, scallops and fluke crudo are all on the five-course menu and cocktails and wines are included. Check out the full menu here.

Turning back to the present though, there are a bunch of things going on that struck our fancy for the seven days ahead. Wishing you fun, sun, and tolerable body temperatures, we give you Your Ideal Week: 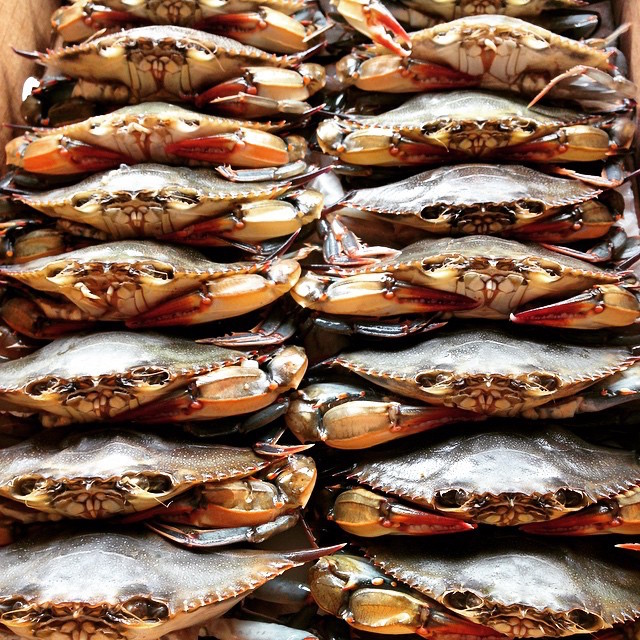 Get all the blue crabs you can eat at Thursday’s crab boil at Ripper’s at Rockaway Beach. Photo: Greenpoint Fish & Lobster Co.

If you missed Tuesday’s Blue Crab Boil at Butter & Scotch, here’s your second chance at a delicious summer seafood feast– and this one’s at the beach! After work on Thursday, hop the A train towards the Rockaways and keep going ’til you get to 86th Street and the boardwalk. Everyone’s favorite beachfront bar and snack shop, Ripper’s, is teaming up with the shellfish experts at Greenpoint Fish & Lobster Co. for a dinner special consisting of crabs, corn, summer tomatoes, hush puppies, and beer. The fun starts at 6pm, so you can be sure to be home at an hour befitting someone who has to work the next day. You could also find a place to stay for the night and play hooky on Friday, like one of us did last week. –K.H. 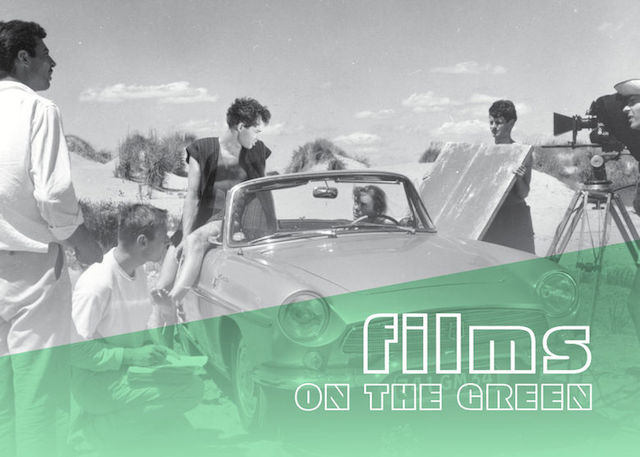 Forget Tribeca and Cannes: If you love movies for the sake of loving movies, you’ve got to check out TromaDance, one of the world’s most down-to-earth independent film festivals, when it touches down in East Williamsburg for its 16th year this weekend. Starting at 6pm on Friday, Paper Box Music & Art will be hosting short films, feature presentations, and panels with talented, creative filmmakers who don’t have to cough up giant fees to submit their work to the festival. Admission to all events, including the TromaDance after party on Saturday night, is open to the public and is first come, first serve, which makes things cheap and easy. However, if this week’s heat sapped your energy to marathon through an entire film festival, you can drop by Transmitter Park on Friday for a more modest commitment: As part of its Films on the Green series, the Cultural Services of the French Embassy will present a rare screening of La Dérive, Paula Delsol’s 1964 French New Wave masterpiece. It’s free to see the film, which starts at 8:30pm and will be presented with English subtitles, but be sure to bring a blanket to sit on, not to mention a clandestine bottle of wine. For more ideas of film screenings taking place all summer, take a peek at our master calendar of free outdoor movies and import your faves into your own GCal. –N.R.

Now that the heatwave has finally broken, there’s no better time to hop on a bike and see all there is to see from Brooklyn to Queens. Saturday morning, the Brooklyn Greenway Initiative will host its 2015 Epic Bike Ride, which takes participating cyclists 40 miles along the Brooklyn-Queens waterfront from the tippy top of Greenpoint all the way out to Rockaway Beach. Along the way, riders will see unrivaled views of the city’s many beautiful parks and bridges while supporting the BGI in its ongoing initiative to maintain and continue construction on the Brooklyn Waterfront Greenway. The ride’s fast start begins at 8am in Greenpoint, followed by a leisure start at 8:15am. If you’re freaked out by the early hour or the total mileage (or both), you can always join the group at Sunset Park at 9am for a 28.5-mile ride, or at Floyd Bennett Field at 11am for 14 miles. At the end, everyone is invited to pat themselves on the back at The Epic After Party where there will be food, complimentary beer, music and, of course, the beach. Tickets are $55 and registration closes on Friday. –N.R. 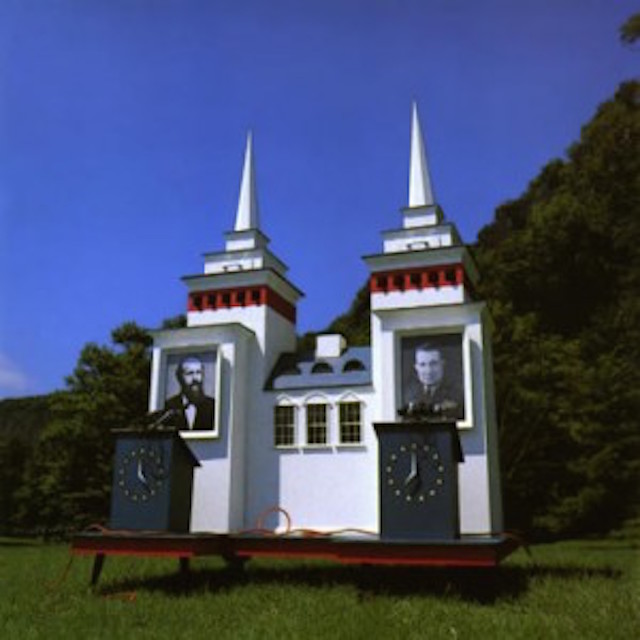 They Might Be Giants will play hits from it’s album, Lincoln, at Music Hall of Williamsburg on Sunday. Photo: They MIght Be Giants

Musicians John Flansburgh and John Linnell have been performing together as the altrock bank They Might Be Giants for over three decades, ever since they moved into the same Brooklyn apartment building on the same day in 1981. Sunday night, they will reunite in their old stomping grounds, performing a live show of hits from 1988’s Lincoln as well as the band’s ongoing Dial-A-Song project, starting at 8pm at The Music Hall of Williamsburg. Tickets are $25. –K.H. 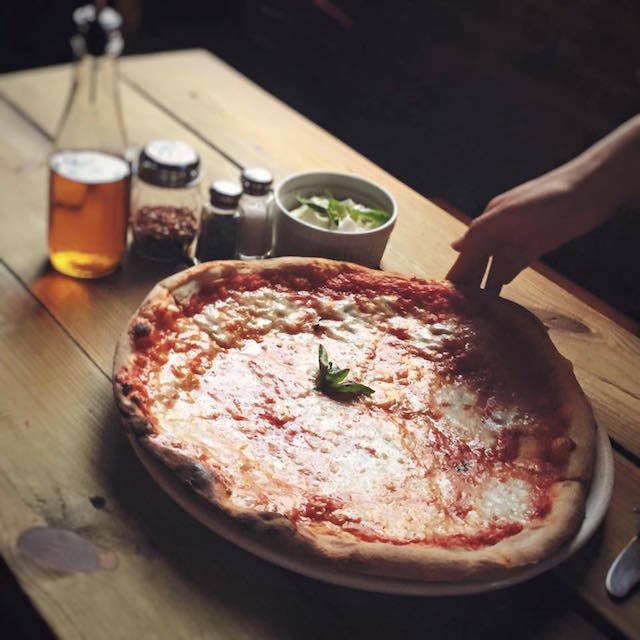 Ever since I read last summer’s New York Times review of Ridgewood’s Houdini Kitchen Laboratory, I was dying to get over there and try the place. It took me almost 10 months, but I finally trekked to the Queens nabe that everyone’s talking about, and I found the pizza at Houdini well worth the trip. Since then, the restaurant’s cool, industrial space has been enhanced with the addition of a spacious and newly renovated garden area and now it’s hosting a series of Vintage Movie and Pizza Nights. Monday at 8pm, get reacquainted with 1985’s Mad Max Beyond the Thunderdome, starring pre-meltdown Mel Gibson and badass babe Tina Turner. A ticket costs $25 and includes your choice of one of Houdini’s inventive, freshly made pies (I recommend the Guido BK), with wine available for another $6 per glass. –K.H. 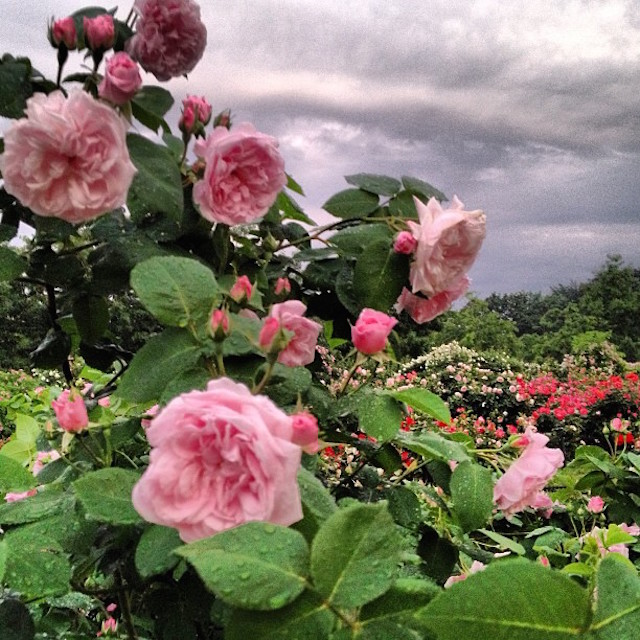 Learn about how roses and other flowers are used to make food at MSG’s Floral Flavors talk on Tuesday. Photo: Brooklyn Botanic Gardens

Since 2012, Sarah Lohman and Jonathan Soma of Masters of Social Gastronomy have been delighting Brooklynites with unique lectures about the history, science and stories surrounding curious food topics. On Tuesday evening, the pair is delivering a special presentation dedicated to Floral Flavors, at the Brooklyn Botanic Garden after hours. You’ll learn about the history of desserts flavored with jasmine, violet, and rosewater, as well as the story behind saffron, the world’s most expensive spice. Tickets are $15 for nonmembers of the BBG, and guarantee access to the gardens and one free drink. They will likely sell out soon, so get a move on if you want to partake in this interesting and educational evening. — K.H. 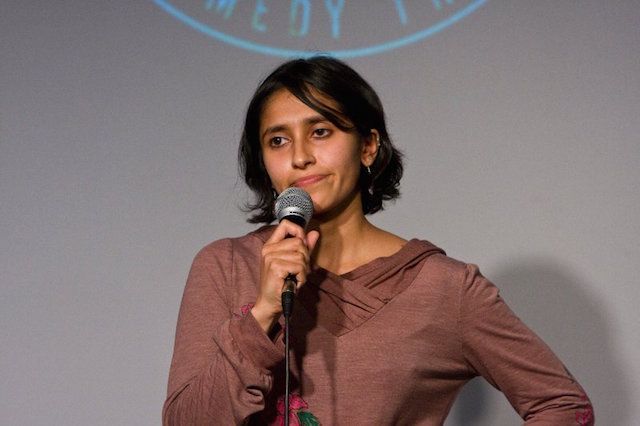 Aparna Nancherla is one of many talented comedians slated to perform at The Bell House’s Stand Up for Charleston show and fundraiser. Photo: Aparna Nancherla

When nine people were senselessly murdered by a racist gunman in Charleston’s Mother Emanuel African Episcopal Methodist Church last month, stories about the victims, the manhunt for the perpetrator, the Confederate flag, and Obama’s rendition of Amazing Grace dominated the news cycle for well over a week. Media coverage of the story may have waned a bit since those initial days, but the shock and horror about what happened won’t dissipate anytime soon, especially among people who live in Charleston. If you’d like to do something to help, consider going to Wednesday’s Stand Up for Charleston event at The Bell House. Not only will you get to see an awesome lineup of comics, like Seaton Smith, Aparna Nancherla, Michelle Buteau, and Guy Branum, but proceeds from sales of the $20 tickets will benefit the Mother Emanuel AME Church and Project South, a leadership development group organizing for racial and economic justice. Doors open at 7pm and the show starts at 8pm. –K.H.