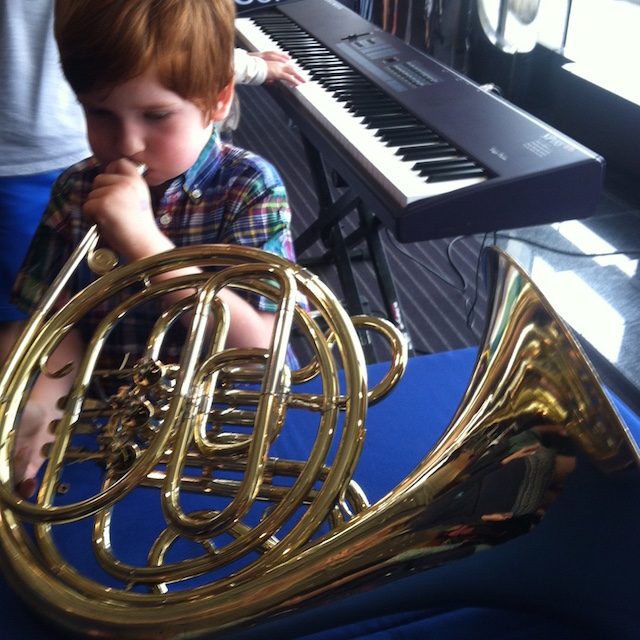 Spending the day trying out instruments with The Cleveland Orchestra at Lincoln Center is pretty much a perfect NYC experience. Photo: Meredith Craig de Pietro

Last weekend, I took my son for his first performance at Lincoln Center. We had been there last year for an informative Sesame Street exhibit. But, I saw that Lincoln Center has other family-friendly programming, including shortened concerts and kid-oriented music events. So for $15/ ticket, I bought entree for our family into a morning event called Fantastic French Horns with The Cleveland Orchestra, a special edition of the Orchestra’s adult performance at LC.

We arrived early to the Stanley K. Kaplan Penthouse, a gorgeous room with wrap-around glass windows, to get good seats. A crew of cheerful volunteers met us at the door and provided my son with his own Lincoln Center passport that he can get stamped at all future events. Inside the room, tables were cluttered with beautiful musical instruments, and although the event was well attended (with about 50 people) we were able to find great seats.

Over the next hour, kids enjoyed an interactive lesson about the french horn by the Cleveland Orchestra’s own Hans Clebsch. We learned about the horn’s prehistoric origins and heard examples of horns ranging from a conch shell to an antelope horn. The director was engaging and kept the event moving with lots of call and response from the audience. We heard beautiful snippets of Strauss, Mozart, and “Pop Goes the Weasel.” My son’s favorite part was when they provided musical accompaniment for the myths “The Wind and the Sun” and “The Tortoise and the Hare.” Second favorite? The beautiful performance of “Somewhere Over the Rainbow” which my son quietly sang along with. 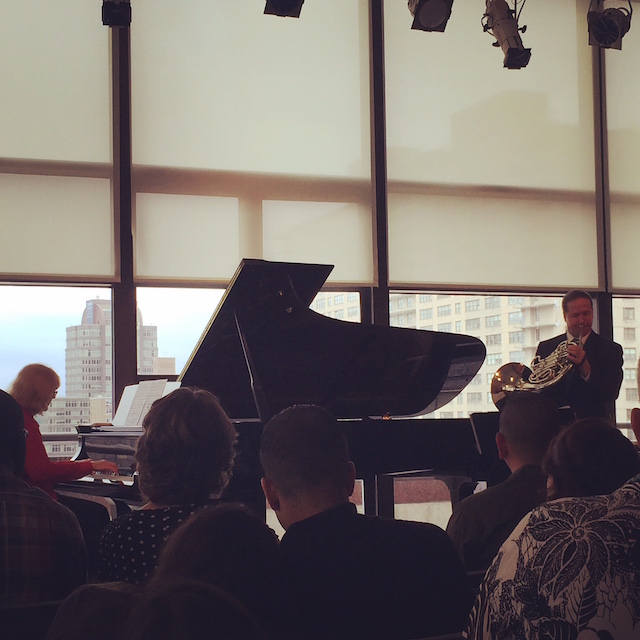 The penthouse is an intimate performance space that feels welcoming and exclusive at the same time. Photo: Meredith Craig de Pietro

Lincoln Center recommended this event for kids ages 6 and up, and I realized quickly that I should take their suggested age at face value for future events. Although most children were very engaged, we did notice a few younger folk who were having trouble concentrating on the performance. One girl was lying in the aisle, a boy was whining to his mother, and another kid was steadily focused on picking his nose and eating it.

At the end of the hour, the kids were invited to the front to touch and try a wide variety of musical instruments. If you imagine this as bedlam, you would be right. But there were so many volunteers helping and wiping down mouthpieces, and so many musical instruments on display, that the kids were able to move thoroughly around getting chances to try everything from the french horn (ofcourse), to the triangle, to the violin. After the 10th time of my son banging a gong, he took a bow and we walked across Lincoln Center, our ears still ringing, to the David Rubenstein Atrium where they have a beautiful vertical garden, and a ‘wichcraft to boot.

August 1st: Puppet Building Workshop, 11am-12:30pm, $25/ ticket, Ages 8+. A hands-on puppet workshop led by puppeteer Leo Gabriadze showing some of the creations from Ramona (which is currently in production at Lincoln Center.) Families will design and build their own puppets. Takes place at The Samuels Studio 165 West 65th Street, 7th Floor.