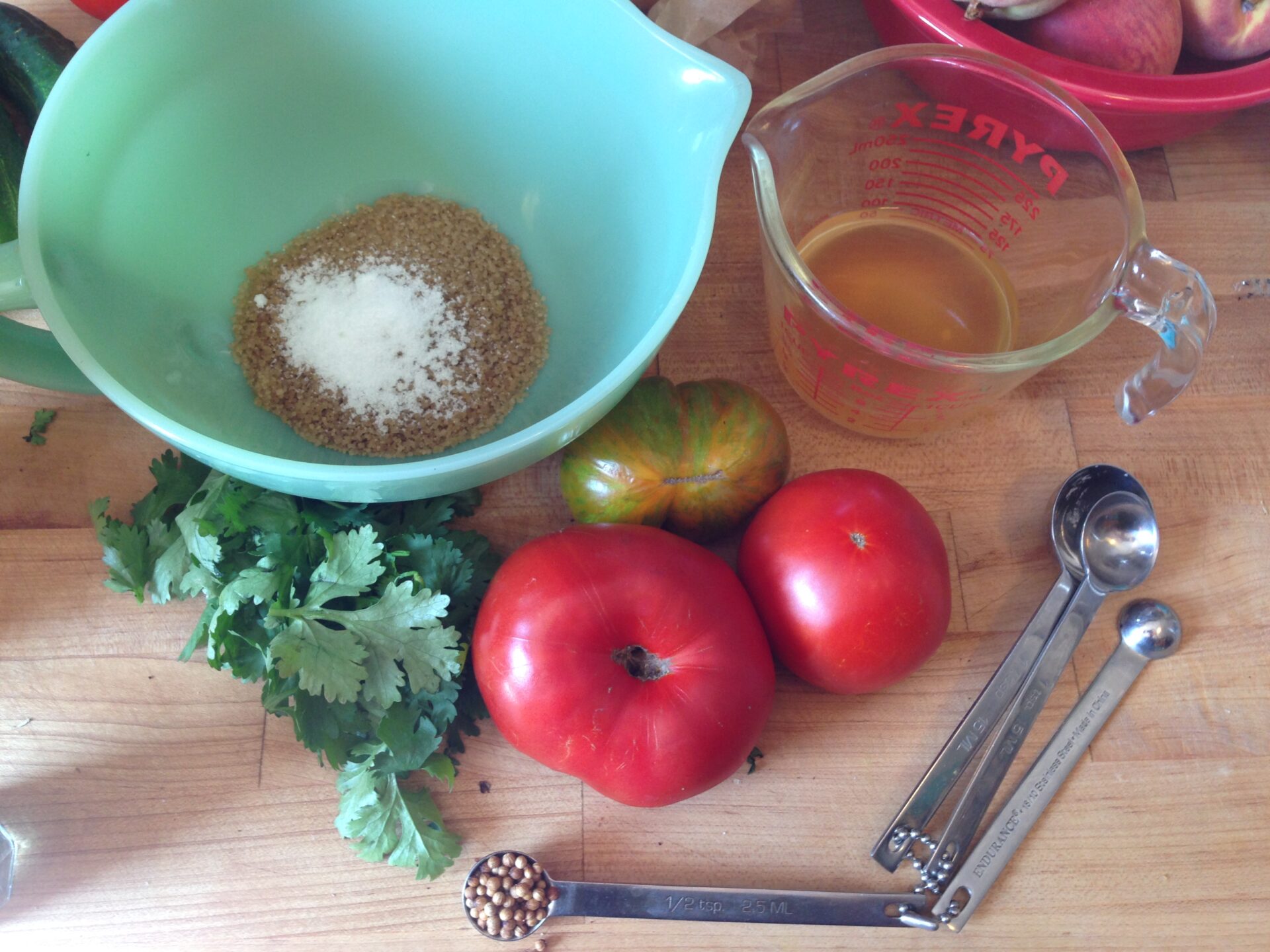 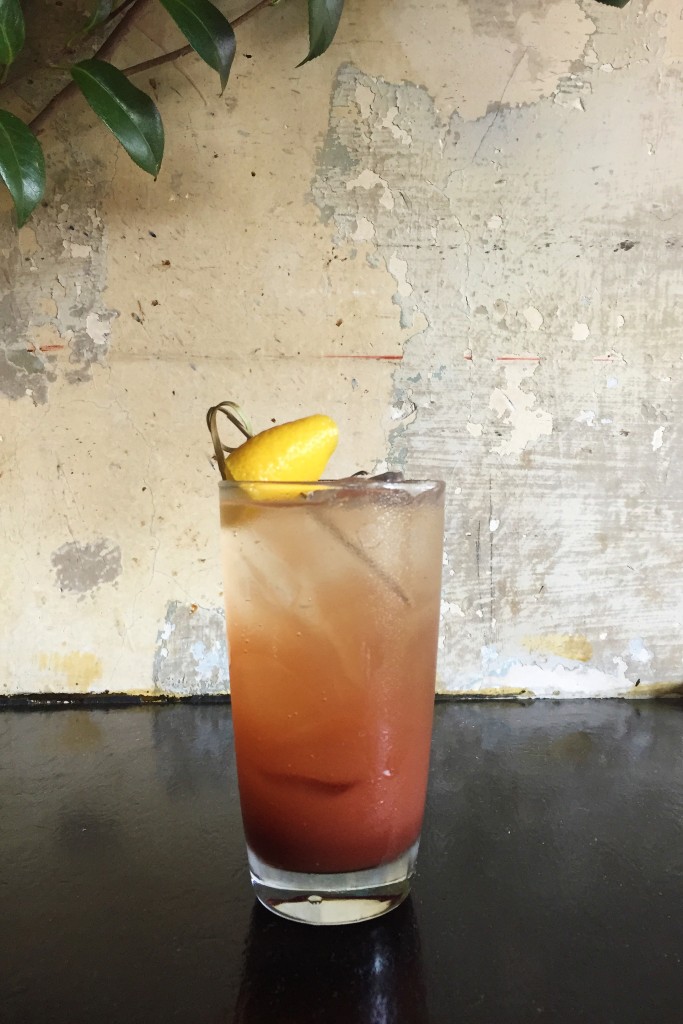 The Cherry and Balsamic Shrub at James in Prospect Heights can be prepared with or without alcohol. Photo: James

A few years ago a friend and I were at a fancy bar where they encouraged you to give the bartender a vague description of what you wanted to drink, and presto-magic!–she would create a brand new cocktail on the spot. “I want something icy, fruity and fantastic,” said my date, and some minutes later he was sipping a drink that combined fresh blackberries, gin and a blackberry shrub over pebble ice. It was indeed icy, fruity and fantastic. Ever since I’ve ordered any drink on a cocktail menu listing a shrub as an ingredient.

Shrubs combine vinegar, fruit and sugar, as well as herbs, spices, vegetables and other enhancements to make a sweet-tart syrup. Combined with soda water or mixed into a cocktail they’re a refreshing punch of flavor that makes the most of seasonal produce. Don’t let the vinegar deter you, or the hisptery mixologist vibes for that matter, shrubs are easy to make and delicious to drink.

Michael Dietsch, a spirits writer who lives in Ditmas Park and the author of Shrubs: An Old Fashioned Drink for Modern Times, says that shrubs are nothing like the overpowering bite of a swig of straight vinegar. “I like to compare shrubs to a tart lemonade you’d like to drink as a grown-up, as compared to the overwhelming sweetness of something like Country Time,” he says. “The tartness is very refreshing.”

Justin Lane Briggs, a Brooklyn-based bartender and co-creator of Cecil & Merl cocktail bitters echoes that sentiment, pointing to their utility behind the bar. “Shrubs are becoming increasingly popular as an alternative acid component in cocktails, in lieu of citrus,” he told us over email. “It gives that same refreshing twang that our palate loves so much in a mixed drink.”

Shrubs are so delicious that the alcohol is practically an afterthought, and on many menus, shrub-based concoctions are offered either virgin or with your booze of choice. At James, the Prospect Heights restaurant (and a sister company to Cecil & Merl), the Black Cherry and Balsamic Shrub combines balsamic vinegar, cherry puree, black pepper and vanilla. You can add vodka, gin, rye or cognac, or forget the hard stuff all together. Matthew Stucky, the bartender who created the drink, says that the demand for something beyond seltzer for non-imbibers is growing. “James is a very popular date spot for expecting parents so we see a lot of demand there,” he says. “It’s nice to treat yourself even when you’re being responsible.”

And if you do want to add a kick? “In my humble opinion, it goes fantastically with young cognac,” Stucky says. “We use Dudognon ‘Selection’ which has been aged for only five years. The lightness of the Dudognon pairs nicely with the shrub which is on the richer side…but then again, ask me tomorrow and I might say rye. We suggest it with cognac, rye, gin or vodka…because everyone on staff has their favorite poison.”

Even if your home bar isn’t stocked with fancy bitters and high-end mixers you can make your own shrubs and come across like a cocktail pro. Dietsch says that one of the best things about shrubs is how simple they are to make and to mix. “They’re so adaptable it’s easy to put your own spin on them,” he says. “If you want it more tart, add more vinegar, less sweet, add less sugar.”

As for mixing, whether you’re making your own shrubs or buying them from a company like Shrub & Co or INNA jam, Dietsch says that making a refreshing soda is as simple as combining seltzer and shrub to taste. For a cocktail, he recommends starting with a spirit you like, combining it with your shrub and then topping with seltzer. From there you can start thinking about additions like liqueurs and bitters, or think how it might replace an acidic element in a drink you already make. Personally, I’m trying to perfect a white sangria recipe using a strawberry or cherry shrub–it’s a work in process.

Both Dietsch and Stucky look to the seasons for inspiration. “Let the farmer’s market be your guide,” says Dietsch, who recommends playing with fruit and herb combinations like peach and basil or blueberry and lavender. (Read his basic guide to making shrubs at home.)

“I think the idea for the cherry balsamic came when Deborah Williamson, one of the owners, came back from the Brooklyn farmers’ market in early summer with some really beautiful cherries in tow and one thing led to another,” writes Stucky. “It seemed like a nice fresh flavor for the season. My mom used to make a super simple dark cherry dessert in the summers with vanilla infused marscapone and a drizzle of balsamic. I think I was trying to replicate that taste of summer from when I was young.”

Dietsch is looking forward to deep tomato season to put together a sweet and savory shrub he created for the book. “I’m so eager to get Sungold tomatoes and make a tomato basil shrub with them,” he says. “The tomatoes are sweet with a bit of tartness and it’s just beautiful.”

Dietsch shared another savory shrub recipe, for a tomato, cilantro, coriander shrub, plus a cocktail suggestions with us…