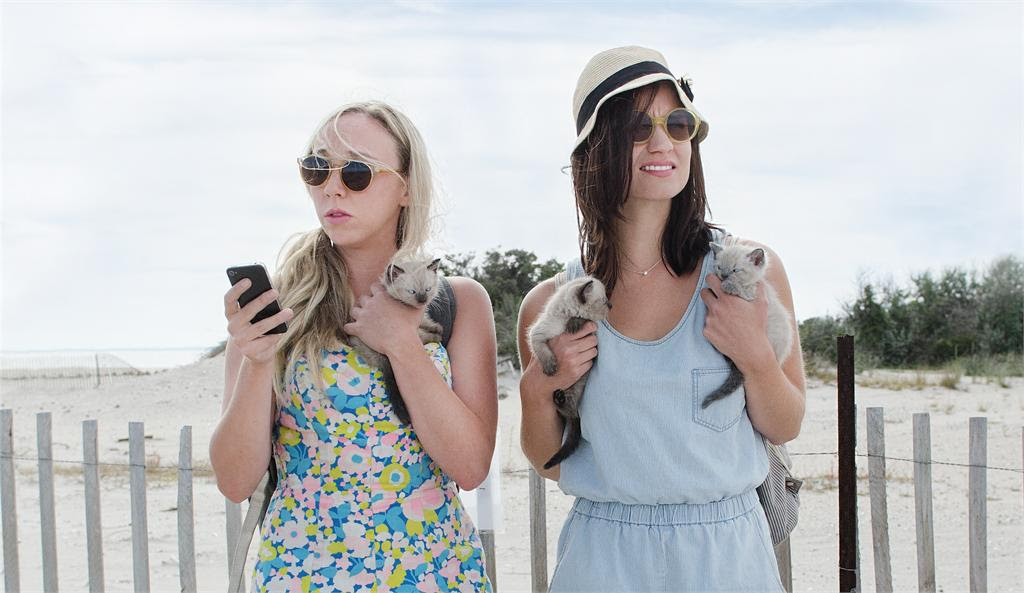 “This place is awesome, it’s such a piece of shit,” notes one of Fort Tilden‘s leading women as she strolls toward the titular beach in Sarah-Violet Bliss and Charles Rogers’ debut feature film. The movie, which picked up a Grand Jury Award at last year’s SXSW, and opens tomorrow at IFC Center, follows a day in the life of Harper (Bridey Elliott) and Allie (Clare McNulty), two friends in their mid-twenties who live in a white-walled, sunlit Williamsburg loft, the kind you see on Instagram but never in real life.

There’s a kind of very believable awfulness to the film’s two heroines that makes you feel nauseous watching the way they react to events of the day, casting aside borrowed bikes, borrowed money, even a litter of abandoned kittens.

You’ve met Harper and Allie before: Harper is a multi-media artist whose most successful creative pursuit so far has been collecting blank checks from her wealthy father, while Allie is also a well-off, though well-meaning millennial who doesn’t seem to do much of anything. Breakfast is set aside so that their “morning tummies” can stay flat late into the day. To get the apartment potentially “sex ready,” Infinite Jest is taken off a dusty shelf and thrown onto the couch in full view. Allie is about to leave for Liberia to serve in the Peace Corps, so the two decide to tag along to the Rockaways with a pair of guys they met at a party the night before.

Anyone who’s ever dared to make the trek sans car to Fort Tilden, the beach that looks like it’s sponsored by American Apparel, knows that the road is a lengthy one. Harper and Allie’s bike journey through Brooklyn, shot with thoughtful cinematography by Brian Lannin, is what makes up most of the movie’s plot, and is where most of the funniest scenes live–lively little “Aha!” moments for anyone familiar with the borough. Like when the women are high-fiving Reggie Watts on Bedford Ave. one moment, and then soon after find themselves stranded in a confusing intersection in the middle of Crown Heights, unsure of whether to risk getting hit by a car or spend another 20 minutes just standing there. Later in the day, when they’re riding their bikes down “the most gorgeous street in all of Brooklyn” and gushing about how much they love Brooklyn, one of them accidently sideswipes a carriage with a baby in it.

A perceptive New Yorker once said, “New York City asks you to sustain yourself on briefly shimmering fragments of happiness nestled amidst the wreckage of daily reality.” Fort Tilden toys with this sentiment, exploring what it’s like to live in a city that offers itself up to you, while you exist in a perpetual state of existential turmoil, hiding overwhelming feelings of uncertainty with social media accounts littered with photos of sunshine and ice cream cones, all at the perfect angle.

The film is a hard feature to categorize, though. On the one hand it’s a caustic portrait of a slice of the millennial generation that for some reason we are constantly forced to see, read about, and in many cases, forced to know–individuals who blunder through art and love and life, sick with spoiled, self-absorbed, predominantly white entitlement. There’s a kind of very believable awfulness to the film’s two heroines that makes you feel nauseous watching the way they react to events of the day, casting aside borrowed bikes, borrowed money, even a litter of abandoned kittens. The unease they elicit is a testament to McNulty and Elliott’s equally sharp performances. Both of them are fantastic comedians, but that doesn’t mean you want to sit through a movie where the pure and utter vapidness of its characters, blown out of proportion as it may be, is at the forefront of the film 97.8% of the time.

The disappointing part is that even at the film’s conclusion, when it seems like the events that unfold at Fort Tilden could nudge the girls toward some inward reflection, Harper and Allie undergo nothing that points even slightly in the direction of change. They are still two very confused, very helpless adults stuck in a stifling adolescent mindset, where what they excel at most, post-college, is eating toast and looking up how-to videos on YouTube. It’s way more depressing than it is bittersweet, or even relatable. If you’re debating between spending your money on Fort Tilden this weekend or another movie (like, say, the wonderful The Diary of a Teenage Girl), I trust you’ll make a better decision than these two women at the beach.