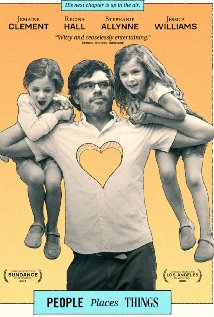 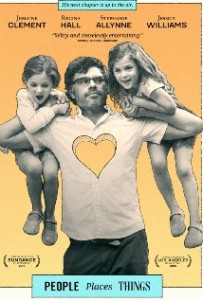 If you hate rom-coms because you’d rather be watching explosions or CGI dinosaurs or a period drama about the secretly lonely life of a former head of state, you probably won’t like People Places Things any more than any other boy-meets-girl story you’ve seen before.

But if you hate rom-coms because the female characters are always brittle, shrill girl-women with tough exteriors who spend the whole movie being punished for being smart-successful-too hot-not hot enough-too weird-too rigid-not married yet, or because 40-something (or even 50-something) leading men are always being romantically paired with actresses who are barely out of high school, or because the couples experiencing all those rom-com hijinks are always young, white, childless and straight, you may be able to wholeheartedly enjoy People Places Things. It’s also a sweet, funny and disarmingly thoughtful little movie about what it’s like to find yourself suddenly adrift in what you assumed was a safe and cozy life.

Jemaine Clemont (from Flight of the Conchords) plays Will Henry, a graphic novelist and adjunct art professor struggling to regain a sense of identity after the mother of his twin daughters separates from him and he has to leave brownstone Brooklyn for a crappy apartment in Astoria. Yes, it sounds like a pretty typical rom-com set up with a twee Brooklyn setting, but the charm of People Places Things, which is playing at IFC Center right now and is available on Amazon and other streaming services, is in the nuance. Will’s ex, Charlie (Stephanie Allynne) isn’t played as a contemptible megabitch, the movie holds Will partially responsible for the demise of their relationship, and they actually talk to one another in a mostly intelligent and caring way. Yes, they’re both flaky, occasionally irritating white bohemians with some leeway to drift around in their lives, but they’re also people you’ll actually recognize, with interior lives too complicated to express with emojis.

Will struggles to be a competent parent in a stretch of the film that deftly captures the particular frustrations of trying to wrangle children in New York City. He also finds a romantic, and comedic interest in Diane (Regina Hall), the mother of Kat (Jessica Williams of The Daily Show), one of his best students. Diane is a lit professor at Columbia, and as she and Will spar over the relative merits of graphic novels and comics, a clear spark (and that classic odd couple, Hepburn-Tracy dynamic) develops between them.

To over-explain People Places Things would be to ruin its easy sweetness. There’s more melancholy here than your typical rom-com, but so much less to hate, too. It’s a reminder that people may or may not change, but our circumstances shift continually, whether we like it or not, and sometimes, even if you were perfectly content with your old reality, a new one can have its charms as well. And that’s not such a terrible thing.