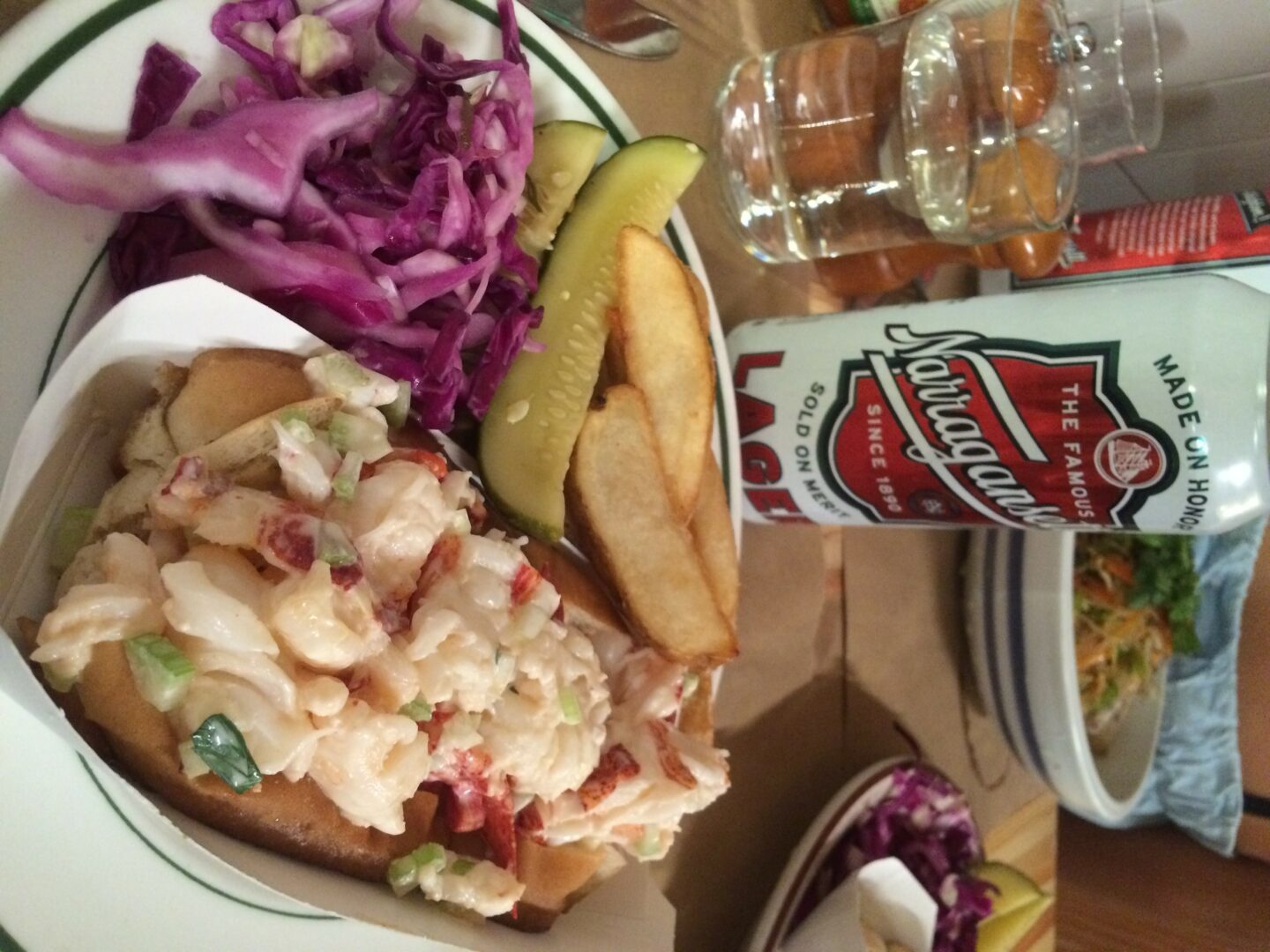 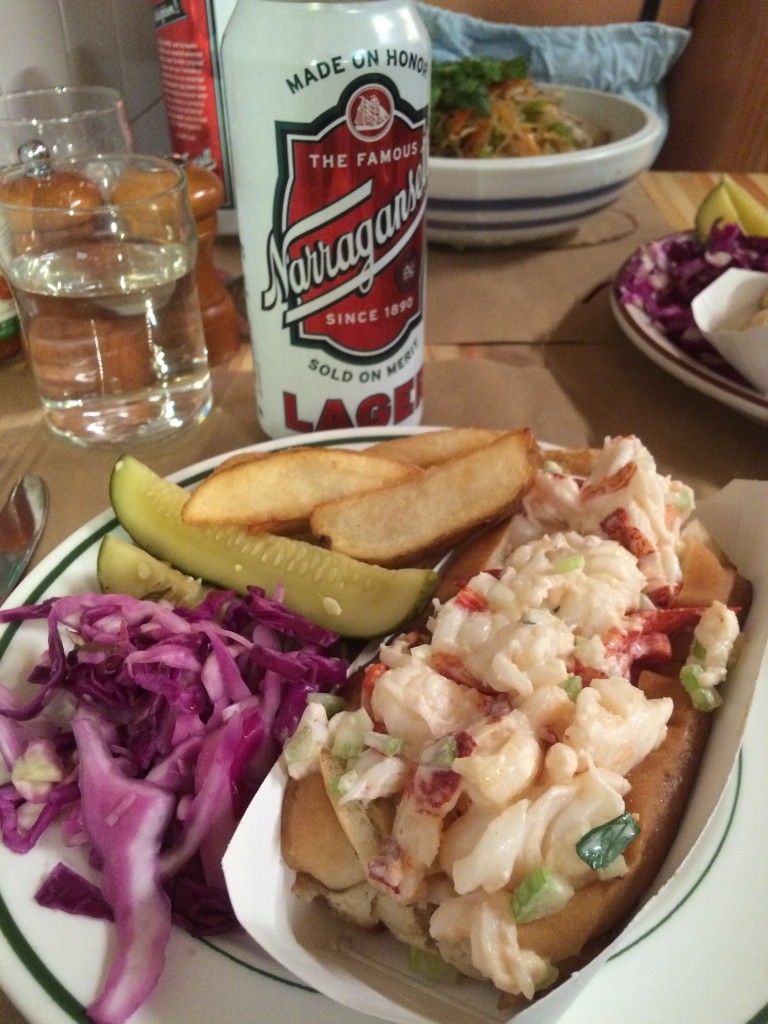 Eat like you’re on vacation, even if you’re not. Photo: Elaheh Nozari

The dog days of August are a great time to eat out in New York City. For one, you can partially justify the expense because you won’t be running your air conditioner at home, or heating up your own kitchen. Most produce is at a seasonal peak right now, and it’s also much easier to snag a seat at one of the city’s most coveted tables, with what seems like half the population on vacation. With so many new casual seafood restaurants to choose from, you can also make up for the fact that you aren’t at some seaside locale by dining as though you were, which is how I found myself surrounded by diners wearing lobster bibs and drinking rosé on tap in Greenpoint last Friday night.

Greenpoint Fish & Lobster Co. opened almost exactly a year ago on Nassau Avenue (we checked it out and liked it, vowing to return once they got their sea legs) promising to fill a void in the Brooklyn food scene: a high quality fish shop. Its mission fits in with the location; aside from being one of the foremost places in New York to get pierogi, Greenpoint has a rich maritime history in its East River shipyards. Co-owners Vinny Milburn (a fifth-generation fishmonger) and Adam Geringer-Dunn saw a need for sustainably-sourced seafood in North Brooklyn, so I stopped by to see how things were going, and to satiate my seasonal craving for a lobster roll. 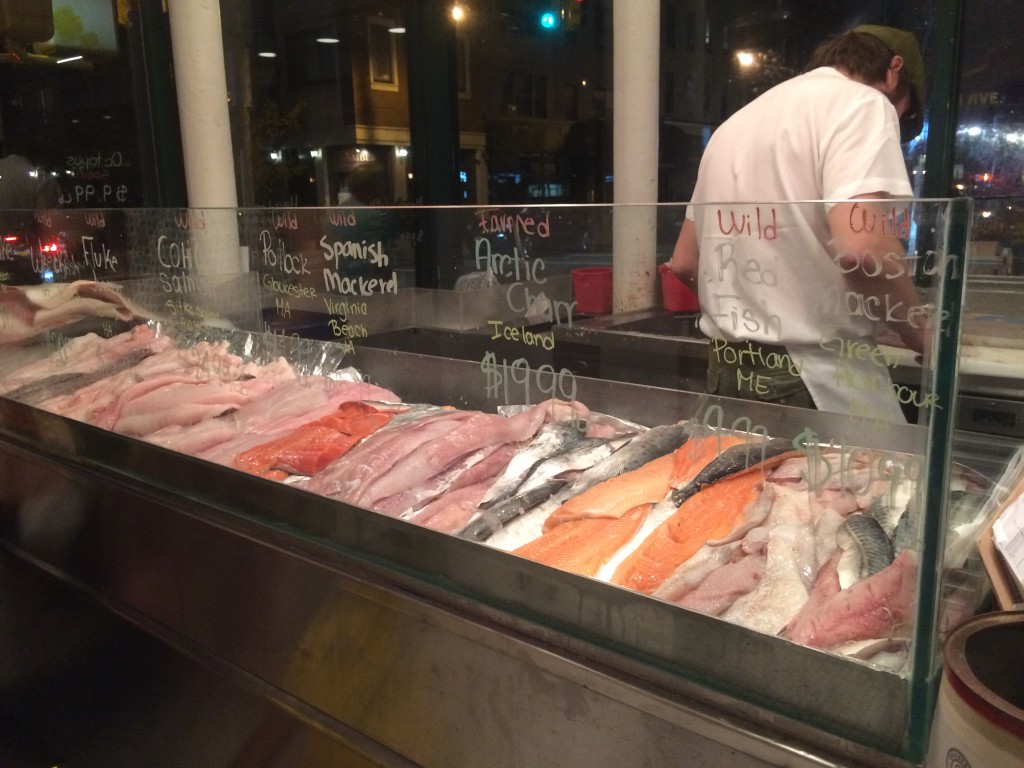 Greenpoint Fish and Lobster is a source for home cooks as well as diners. Photo: Elaheh Nozari

Though the L train was near-deserted and my walk through McCarren Park revealed fewer man-buns than usual, the small subway-tiled restaurant was packed. Luckily, the long line was deceptive—it was split between home cooks picking up fish from the market, people picking up take-out boxes to go, and the rest of us—groups of two and three waiting to be seated at the long marble bar or at one of the five high-top tables.

What makes Greenpoint Fish & Lobster stand out among other Brooklyn eateries that dole out lobster rolls and oysters on the half shell is its fish market, a small but mighty operation situated at the front of the narrow space. When they opened up shop, Milburn and Geringer-Dunn emphasized a desire to educate customers on where their seafood comes from, a sensibility that is very much intact. The origin of each fish or sea creature is written on the transparent display case below the name and price. On Friday, there was wild red fish from Maine, farmed Arctic char from Iceland, wild Coho salmon from Alaska, plus six other varieties and the usual lobster by-the-pound from the tank in the open kitchen. My feeling that I was in the right place for seafood was confirmed after finding out that a man in line was a fishmonger himself, a tidbit I picked up on while eavesdropping on his conversation with the prep worker filleting salmon behind the counter. 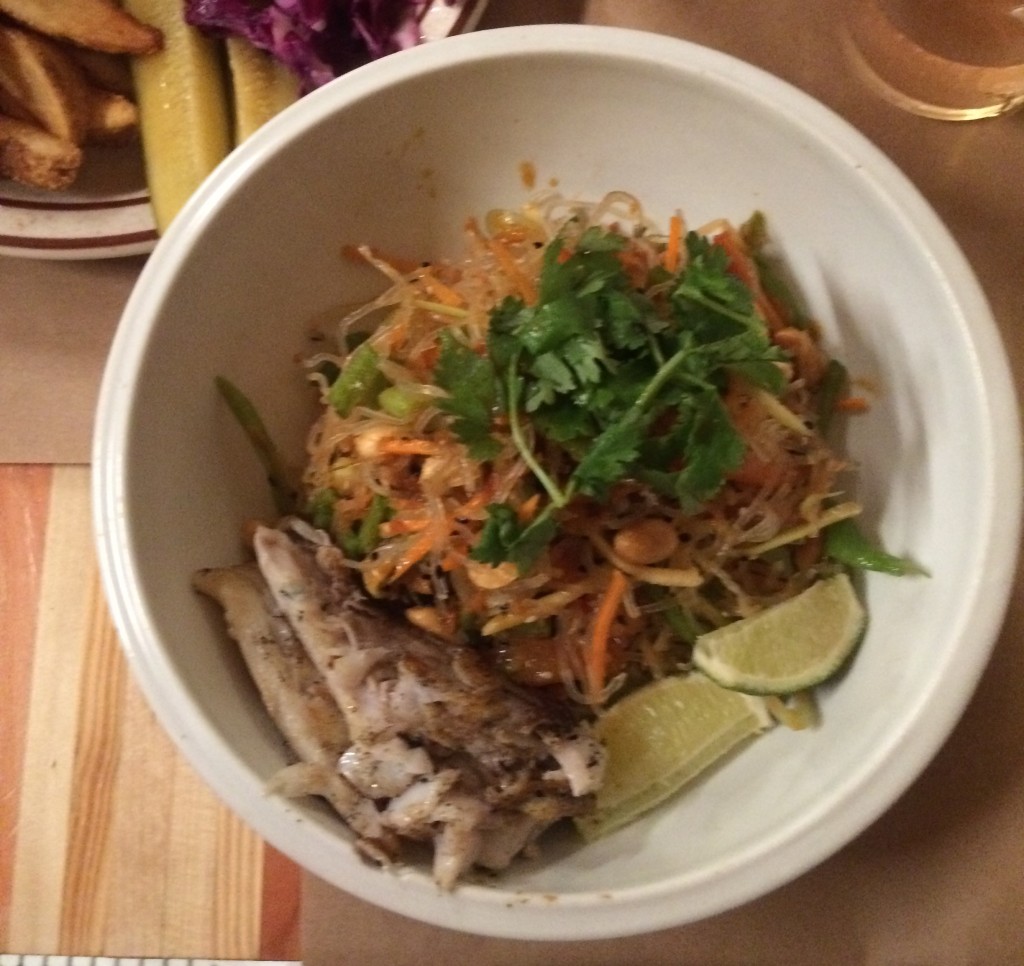 In a case of why fix what isn’t broken, the sit-down menu hasn’t changed much over the past year, save for some price inflation (last summer’s $18 lobster roll is now $25). There are still New England classics like fried oysters ($15), creamy clam chowder ($6), and whole steamed Maine lobster (market price), plus dishes you could only find at a Brooklyn seafood shack in 2015–vegan, raw, gluten-free kelp noodle pad thai ($15, plus $6 with grilled fish-of-the-day), fried brussels sprouts ($8), and mussels steamed in spicy coconut milk-based green curry ($18). I’ve eaten kelp noodle pad thai  more times than should be allowed of someone with zero food allergies, and this was one of the better I’ve had, thanks to crunchy peanuts and a grilled fish add-on–pollock was the catch of the day. Overall there’s a good balance between classic fish shack cuisine (though sorely lacking fried clams), and updated dishes, as well as between fried and grilled menu items.

This is not a small plates restaurant, but if you like sharing and tasting more, there’s plenty on the menu for that. Fish tacos ($12), fried cod on corn tortillas topped with citrus cabbage slaw, chipotle lime mayonnaise, radishes and cilantro, come two to an order actually work best as an appetizer for two. The fried oysters tossed in buffalo sauce and served with served with celery sticks and housemade ranch dressing ($15) are also very sharable.

There are also daily specials–on Friday evening it was seared scallop roe, simply dressed with olive oil and lemon, served with French bread. The daily market entree changes daily based on the fish selection, and there’s an oyster happy hour from 2-5pm Monday through Friday. Pair a plate of $1 oysters with Finger Lakes rosé on tap (or a Narragansett) and you’re practically on vacation. Yes, some light hooky playing may be necessary.

And what of the $25 lobster roll? It comes with a side of two pickles, red cabbage coleslaw and fries, for one, and taken all together it’s well worth the price tag. The lobster salad wasn’t overtaken by mayonnaise (nor was the coleslaw), and the toasted bun was buttered perfectly. The fries are thick wedges of potato, well cooked and crispy, and a nice anecdote to the ever thinner cuts of fries that have been accompanying burgers around the borough as of late. If I had grown up in Maine, I’d say that it tasted like my childhood.